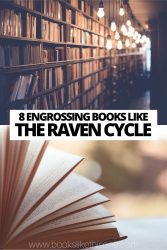 The Raven Cycle spawned a legion of fans. Maggie Stiefvater’s tale of Blue Sargent, a girl who’s told her will cause her true love to die, is littered with heartbreak, adventure and magic. Beginning with The Raven Boys and ending with The Raven King, Stiefvater’s characters are complex and interesting enough to keep you reading all the way to the end. If you’ve already absorbed the series, what other books like The Raven Cycle are out there?

Finnikin of the Rock, by Melina Marchetta

Books like The Raven Cycle try to focus more on character over plot, which is good as the best stories often come from well-written characters.

Finnikin of the Rock is the first in Marchetta’s Lumatere Chronicles and it tells the tale of Finnikin and his guardian, Sir Topher, as Finnikin is summoned to meet Evanjalin, a young woman who claims the heir to the throne of Lumatere, and Finnikin’s childhood friend, Balthazar, is still alive.

Yet as Finnikin is entranced by Evanjalin’s confidence and determination, the reader is left to wonder if Evanjalin is everything she claims to be. Finnikin of the Rock is filled with nuance and plot lines that keep you guessing.

Yes, there is a love story. Yes, there is an enemy both despicable and nasty. However, each character is rarely what they seem. If you loved The Raven Cycle, you will enjoy Finnikin of the Rock.

Testing friendships are a common theme in books like The Raven Cycle. This is admirably displayed in Code Name Verity, a richly nuanced story about a pilot and passenger whose spy plane crashes in Nazi-occupied France in 1943.

When “Verity” is captured by the Gestapo she is certain of her doom. A secret agent captured in enemy territory? No chance.

When her interrogators offer her a choice; reveal her mission or face a gruesome execution, Verity begins to spill her secrets, telling a tale of how she and the pilot Maddie, became friends and why she left Maddie in the wrecked plane.

Code Name Verity, elevates itself above other books simply by being a lot better than you expect. Hauntingly written, it shows just how far friends might be willing to go to save each other.

Some books like The Raven Cycle delight in playing with reader expectations. Jonathan Strange & Mr Norrell revels in dancing readers on a magical ride through an alternative 19th century England.

A place where English magicians were once considered the wonder of the known world, but who have now lost much of their magical abilities. Well, almost all.

The reclusive Mr Norrell has been gathering a vast library of lost books from the magical past and has regained some of the old powers. His abilities become the envy of many as he lends his help to the government in their war against Napoleon Bonaparte. Everything seems fine until a rival magician appears.

Jonathan Strange is younger, more charming and much less reclusive than Mr Norrell. As the two strike up a tentative professional relationship, the allure of power and rivalry begins to set in. If you enjoyed The Raven Cycle, Jonathan Strange & Mr Norrell is one of those books that will keep you turning the page.

This Savage Song, by Victoria Schwab

Magic and monsters prowl around books like The Raven Cycle. Schwab is often known more for her Shades of Magic series, but This Savage Song is dark, fun and filled with intrigue.

Kate and August are the heirs to a divided city, but this is no ordinary city. It is a city filled with a violence that actually breeds monsters. Kate wants to be as ruthless as her father and make humans pay for protection. August sees a different way in life, learned from his good-hearted father.

There’s just one problem; August is one of the monsters, a being who can steal a soul with his music.

This book makes you really feel for the characters, monster and human. Kate and August are well written and believable in their needs and desires and you will find it hard to root for one over the other.

Heartstopper: Volume One, by Alice Oseman

Books like The Raven Cycle don’t have to play with magic and fairies to tackle similar themes. Heartstopper is a good example.

We are introduced to Charlie, an anxious and openly gay over-thinker, and Nick, a ruddy and cheerful rugby player as they meet at an all-boys school. Despite being complete opposites in outlook and attitude, a friendship between the two soon blossoms and Charlie begins to fall hard for Nick.

He doesn’t think he has a chance considering Nick’s popularity and standing at school… or does he?

It’s hard not to like Charlie and Nick. They’re both relatable characters. Teens and adults alike can all understand how awkward life at school could be and how cruel and vicious bullies are.

If you loved The Raven Cycle and are looking for similar themes in a different setting, you should check out Heartstopper: Volume One.

Some books like The Raven Cycle wear their magical heart proudly on their enchanted sleeve. Clockwork Angel is set in the Shadowhunters universe at a time when the Shadowhunters are barely winning their continuing battle against the forces of darkness.

A prequel to the Mortal Instruments series, Clockwork Angel follows Tessa Gray, as she descends into the 19th-century streets of London looking for her missing brother.

As Tessa becomes drawn to Will and Jem, two Shadowhunters, she becomes embroiled in a diabolical plot between vampires, demons, warlocks and humans who have created an army of unstoppable clockwork creatures to take over the British Empire.

Pause for breath! Clockwork Angel is a fantastically fun read and any fan of The Raven Cycle will find something to enjoy here.

The title alone is enough to have you thumbing your way through the opening pages. Books like The Raven Cycle don’t always have to be filled with reams of magic and monster, they can be quieter and more introspective too.

Ari and Dante are two teens growing up in El Paso, Texas in the 1980s. Ari has loving parents, but his father silently bears the trauma of the Vietnam War which keeps him distant from his son. Ari has sisters and an older brother the family don’t talk about. Ari doesn’t have any friends until he meets Dante one summer at the local swimming pool.

As the two boys spend more time together, the reader watches as Ari slowly begins to open up to Dante and the two form a friendship that deepens into something neither of them expected. This book has won a lot of awards.

Whilst I rarely enjoy award-winning books, Aristotle and Dante Discover the Secrets of the Universe kept me reading all the way to an end I didn’t expect, but which makes total sense. This is worth a read for anyone who enjoyed The Raven Cycle.

Already read this book? Check out our list of more books like Aristotle and Dante Discover the Secrets of the Universe!

Being the son of a murderous crime lord known as “The Butcher” isn’t the kind of lead character you expect in books like The Raven Cycle. Yet, in The Foxhole Court, we are introduced to Neil Josten, the newest addition to the Palmetto State University Exy team and the runaway son of his crime-lord father.

Neil is offered the chance to sign for the PSU Foxes, and whilst it’s the last thing he should do, he can’t resist. The Foxes are too high profile and Neil’s lies about his family will only hold up so long, especially when Neil discovers a friend from his old life is also on the team.

This book is a lot darker than you might expect, but it does deal with a lot of the same themes and friendships seen in The Raven Cycle. Lies, broken promises and more are littered throughout.

A story about a boy who’s been on the run his entire life, The Foxhole Court is worth looking at.

The Raven Cycle series cemented Maggie Stiefvater’s reputation as a YA author to follow. Her books and the ones above are easily amongst the most popular in the YA market.

Are you searching for more books like The Raven Cycle? Have any recommendations that didn’t make the list? Let us know in the comments! 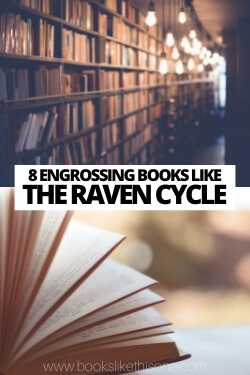