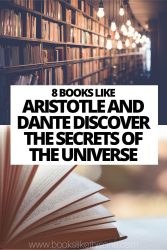 Any book that is driven by character is usually a good read, and books like Aristotle and Dante Discover the Secrets of the Universe are primarily driven by character. Dante and Ari come from very different backgrounds yet manage to develop a close relationship that many teens will relate to.

Ari might come across as a bit of a hard-nosed grump, but his vulnerability and relationships with his father and with Dante are completely believable. Dante too possesses a sweet awkwardness, even though he is quite self-assured on the surface.

This tale of two awkward teens discovering their love for life and each other is sweet, heartbreaking and all the better for both. So, what other books like it are out there?

Simon vs. the Homo Sapiens Agenda, by Becky Albertalli

Emotional blackmail is a terrible thing to do to another human being. Yet, with books like Aristotle and Dante Discover the Secrets of the Universe, emotional blackmail is a bit of a theme. Simon, the eponymous hero of Simon vs. the Homo Sapiens Agenda, is gay but has been keeping it a secret from his classmates.

Unfortunately, the class clown (or cruel bully in my view) Martin, has discovered Simon’s secret and decides to blackmail him. What follows is a thoughtful tale that advocates a world where being straight is not the default.

Being pressured to “come out” is awful, and anybody in the LGBTQ+ community will relate. A good read for any teenager, and adult too, straight or not.

Books similar to Aristotle and Dante blend humour and heart pretty well. Fewer of them manage to skewer an existing children’s fantasy quite as well as Carry On though.

Carry On is the queer-meta version of Harry Potter and boy does it work well. A fictional character who is the subject of fascination in another fictional character’s life from another book. Are you with me so far? If you are, you will probably enjoy this story a lot.

Jokes about Simon’s wand not working are just some of the snigger-worthy moments to be had. Yet, what really shines through here, is the funny and quite charming relationship between Simon and Baz.

Simon is bisexual and Baz is a smouldering vampire. You can probably guess what will happen, but this story is less about plot, and more about the characters. A bit of a Marmite choice, but if you love the concept, you’ll love the book.

Graphic novels have never been more popular. Books like Aristotle and Dante don’t shy away from examining how traumatic and complex growing up can be.

In Heartstopper this is displayed well in the relationship between Charlie and Nick. Charlie is an openly gay Year 10 (14-15 years old) at an all-boys Grammar School. He used to be bullied a lot after he was outed the year before, but that has begun to fade.

Nick is on the school rugby team and has only heard about Charlie from a vague distance. When the two become friends, Charlie starts to fall hard for Nick, but Nick is straight. Isn’t he?

A well told tale that has touched the hearts of many teens within and outside of the LGBTQ+ community, Heartstopper is the perfect read if you want a bit of a comfort blanket to curl up under.

The Boy from the Mish, by Gary Lonesborough

Books like Aristotle and Dante Discover the Secrets of the Universe hook their readers by appealing to their worries and hearts before reassuring them that they are not alone.

The Boy from the Mish follows Jackson, a black repressed-gay boy living in rural Australia. It’s summer and Jackson is trying to hang out with his friends, avoid the racist boys and generally enjoy his life. Everything changes when Jackson’s Aunty visits with his cousins and a new boy called Tomas in tow.

Tomas forces Jackson to face a part of his identity that Jackson has been too afraid to explore and this is where the warmth and power of the story lies. I like tales that explore different communities and people, and The Boy from the Mish is a great example. Read now!

Not as well-reviewed as some of the other titles on this list, but 100 Days is worth your time.

Similar to Aristotle and Dante Discover the Secrets of the Universe in that it focuses on two friends who discover feelings for each other that they didn’t expect. The difference here is that Jake and Aiden have been friends since they were six.

Now that they’ve just graduated from college, they decide to take a road trip around the US with the aim to visit every state in 100 days.

This story will appeal to anybody who has ever fallen in love with their best friend, and been too afraid to tell them for fear of ruining the friendship. Any reader with a pulse will relate to what happens between Jake and Aiden.

Imagine if Prince Harry fell in love with Malia Obama? Now imagine that Prince Harry is actually Prince Henry and Malia is Alexander Gabriel Claremont-Diaz, the first son of the first family in America and someone who is rapidly realising he is bisexual as well as being mixed race.

Books like Aristotle and Dante enjoy torturing their leads as well as making us feel for them, and in Red, White & Royal Blue you do feel for Henry and Gabriel, even if they do come from privileged backgrounds.

The media scrutiny and having to be constantly on their guard works well, but it is the odd-couple comedy moments that help this story to shine. Henry and Alex don’t like each other at first, but when they are forced together, their budding romance forces them to decide how much they are willing to risk for the sake of the relationship.

Have you already read this novel? Check out our list of books like Red, White & Royal Blue!

Arminius and Thusnelda Versus Rome, by Michael G. Kramer

History is written by the victors… and a lot of truth can be lost. Technically, this book is not like Aristotle and Dante Discover the Secrets of the Universe, but you should still read it as it highlights how unequal and skewed we have allowed history to become.

This is a history book about how women were treated on equal terms with men. Arminius and Thusnelda became a thorn in the side of the Roman conquest of Germania.

The study of how Arminius became disgusted with the often-casual brutality of Rome against the German tribes and how he and Thusnelda fell in love, married and wiped out three Roman legions, is gripping and a good reminder that all different types of love and rights were present two thousand years ago.

If you want to know how books similar to Aristotle and Dante Discover the Secrets of the Universe showcase the varied roles and relationships that have been in place for centuries, then you should take a look at Arminius and Thusnelda Versus Rome.

Call Me By Your Name, by André Aciman

Holiday romance and psychological manoeuvres drip through Call Me By Your Name, a story of two teenage boys in the Italian Riviera. Heartbreak, betrayal and more are axed into your soul as you hack your way through the first-person thoughts and worries of 17-year-old Elio.

His relationship with 24-year-old Oliver might be familiar to anyone who has begun to explore their sexuality with an older person. This story might not appeal to every reader who liked Aristotle and Dante, but if you’re looking for a sad and intoxicating tale of infatuation and emotional control, then there is something here for you.

And any teenager who has had a crush on an older person (or adult who remembers what it felt like), will relate to this.

Have you already read this novel? Check out our list of books like Call Me By Your Name!

Books like Aristotle and Dante Discover the Secrets of the Universe are filled with warmth, love, sadness and more.

Are you looking for more books similar to Aristotle and Dante? Have any recommendations that didn’t make the list? Let us know in the comments! 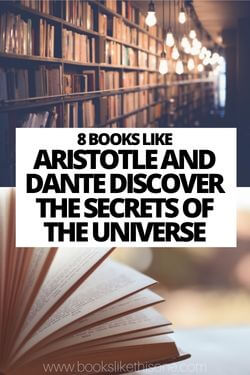