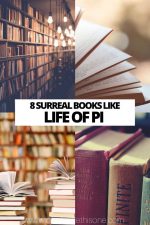 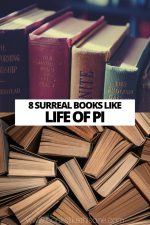 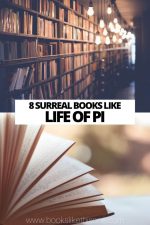 If you want fiction that challenges you, that has you exploring alternative meanings and questioning reality then look no further than this list of books like Life of Pi. Classed as a philosophical novel exploring religion and the effects of trauma, the art (and importance) of storytelling is also at the heart of Yann Martel’s Booker Prize-winning novel.

Life of Pi tells the story of Pi Patel, a young Indian boy who loses his entire zoo-keeping family to the ocean when the ship they were sailing on from India to Canada sinks. We learn how he endured 227 days lost at sea with only a Bengal tiger for company, by drawing on his faith and survival instincts.

Pi’s story is framed by notes from the author which unusually describe completely fictitious events, strengthening this concept surrounding the relativity of truth and how we perceive the stories we are told, which ultimately has us questioning Pi’s version of events.

Books like Life of Pi can just be enjoyed for their imaginative story lines, but to explore the undertones in these novels is also a fruitful exploit as you never know what else you might discover.

The Metamorphosis, by Franz Kafka

As with a lot of the books like Life of Pi, there is ambiguity surrounding what exactly the author might have been trying to say through their novels or whether they were trying to say anything at all. A prime example of this is The Metamorphosis by Franz Kafka, a novel whose possible meanings have been greatly contested over the years.

On one reading, it is a bizarre story about a salesman (Gregor Samsa), who turns into a grotesque insect overnight and is ostracised by his family. On another, the plot acts as a vehicle representing alienation and loneliness, on another Kafka’s alleged father complex can be interpreted, while other critics allude to religious and psychological connotations.

Yet despite this conflict of opinion, The Metamorphosis is one of the most widely read novels of 20th Century literature, Kafka’s fusion of the real with the fantastic take you out of this world and if no other conclusion can be drawn about the narrative, his rich prose is thoroughly enjoyable to read.

The Fountainhead, by Ayn Rand

The Fountainhead by Ayn Rand explores the battle between individuality and society and is still as fresh and relevant today as it was over 70 years ago when it was published in 1943.

Howard Roark is a young architect who firmly clings to his integrity and outlandish designs rather than selling out for societal norms and expectation. This way of being not only loses him countless job offers, but also the love of his life the beautiful Dominique Francon who, in spite of her own love for Roark, ends up marrying his worst enemy.

Yet for all the loss and trouble, Roark stays true to himself and refuses to conform, signifying that man’s ego is the source (the fountainhead) of human progress.

Rand is said to be the mother of objectivism and it is this groundbreaking philosophical approach to her work that brought her worldwide acclaim, there is a lot to unpack in The Fountainhead which readers of novels like Life of Pi will endure to find.

Dan Brown’s novel The Da Vinci Code caused a wave of controversy upon publication in 2003, causing offence to the Catholic Church and literary critics who claim the novel is poorly written, it may even spark some controversy appearing here on this list of books similar to Life of Pi, but bare with me.

The premise of the novel is to look at things differently and to question what we are told, what we believe to be true, in this case, an alternative religious history whereby Jesus Christ and Mary Magdalene had a child together.

Codes and symbols hidden within the works of Leonardo Da Vinci, visible for all to see, act as clues to this ancient secret and it is down to Robert Langdon, a Harvard-educated symbolist, to crack this code, solve the mysterious death of an elderly curator at the Louvre museum and reveal the secret.

Obviously not as philosophical or allegorical as other books listed here, but the mystery and suspense of The Da Vinci Code and these theories immerse you into an alternate universe and looking at things differently which is exactly what a surreal novel should do.

Already know and love this novel? Check out our list of books like The Da Vinci Code!

If you like the concepts of storytelling and the truth in Life of Pi then you will enjoy this aspect of Umberto Eco’s The Name of the Rose too.

On the surface the novel is a murder mystery, however, the narrative goes much much deeper than this exploring the meaning and theory of truth in philosophy, theologically, historically, scholarly as well as delving into medieval history, metaphysics and theology.

We are in Italy, it is 1327 and Brother William of Baskerville has arrived to investigate Benedictines suspected of heresy an investigation which quickly becomes overshadowed by a spate of mysterious deaths. Brother William must draw insight from Aristotle, Aquinas and Roger Bacon as he turns detective to get to the bottom of the strange goings-on at the Abbey.

There’s more code-cracking and deciphering symbols to be had just as in Dan Brown’s The Da Vinci Code, and among other things is what makes The Name of the Rose such a deep and incredibly thought-provoking novel.

Another Booker Prize winner to appear on this list of novels similar to Life of Pi is Arundhati Roy for her debut The God of Small Things. The plot involves the tragic childhood experiences of fraternal twins Estha and Rahel and how these experiences, these ‘small things’ have echoed well into their adult lives.

Set in the exotic and colourful Kerala and told mainly from the twins’ childlike perspectives, the novel has this magical dimension to it. Roy brings into focus the cultural tensions of India, the political landscape, religious caste relations and the outdated ‘Love Laws’ which dictate who should be loved, and how and how much.

Yet on another level, Roy’s unique way of telling a story; out of sequence and with revolving timelines, really resonates with Martel’s emphasis on the art of storytelling and the truth. I have read this book several times now and each time I find something new, another area of the plot to be considered in more depth.

The God of Small Things is a heartbreaking and beautiful read which will continue to surprise you each time you pick it up.

Max and the Cats, by Moacyr Scliar

Moacyr Scliar’s novel Max and the Cats is credited by Martel as his spark of inspiration for Life of Pi (and to some controversy) but in truth, the two books have little in common besides big cats in boats and survival at sea.

They have very different undertones, Martel’s as we know is concerned with faith and imagination whereas Scliar’s novella is a political allegory and acts as a metaphor for Nazism and Brazil’s military dictatorship.

The protagonist Max Schmidt grew up in Nazi Germany, his father owned a fur store and it was here Max begins a love affair with a married clerk who worked there. When the husband finds out about the affair, Max is forced to outrun the Nazi secret police and boards a freighter full of zoo animals set for Brazil.

But disaster continues to follow him when the ship sinks and he is stranded alone, in a dinghy, with a hungry jaguar. An incredibly surreal and innovative story idea used by both authors as a vehicle to explore so much more, readers of books like Life of Pi are sure to enjoy delving into Max and the Cats, too.

The Stranger, by Albert Camus

The Stranger or L’Étranger as it was originally published in French, by Albert Camus has become an enduring classic with Camus himself becoming an inspiration to many other philosophical writers.

Meursault is an ordinary man who unwittingly becomes embroiled in a senseless act of violence which results in a murder on a beach in Algeria. A murder which he ends up paying the price for as all his previous innocent actions, appearances and emotions get put on trial as well as this accidental killing.

With the well-known opening lines; “My mother died today. Or maybe yesterday, I don’t know,” the novel questions the meaning and absurdity of life, existentialism, authenticity and coming to terms with the fact that we are all just a part of existence and a pretty small and insignificant part at that.

Though The Stranger is short it does pack quite the punch and is another book that I have reread several times finding new areas to consider, making it a great read for those who like to unpack novels like Life of Pi.

The Old Man and the Sea, by Ernest Hemingway

We are back at sea in another man vs. the elements story in Ernest Hemingway’s powerful classic The Old Man and the Sea. Set in Cuba, aged fisherman Santiago hasn’t caught any fish for 84 days straight, he is becoming the laughing stock of town referred to by others as ‘salao’ the unluckiest.

To prove them wrong and break this cycle of bad luck he ventures further out on his next fishing trip, into the deeper waters of the Gulf Stream. And it is here he catches a great Marlin, a Marlin so great Santiago has to do battle with it for three days as neither is willing to admit defeat.

The narrative is imbued with biblical and religious symbolism as Santiago is frequently likened to Christ, the ocean is seen as a metaphor for God’s sorrow as well as a motif of power, strength, life hope and truth.

The Old Man and the Sea is the last major work of fiction to be published in Hemingway’s lifetime and is one of his most famous, a fitting end to this list of books like Life of Pi.

Books like Life of Pi can be read and enjoyed time and again, with fresh eyes it is easy to discover new meanings or a new angle on something previously overlooked, they are however still fiction and can be savoured as just that.

Are you searching for more books similar to Life of Pi? Have any recommendations that didn’t make the list? Let us know in the comments! 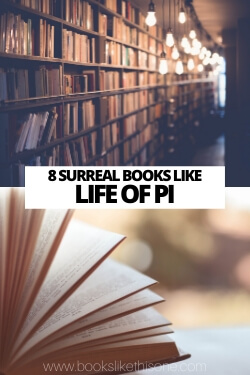