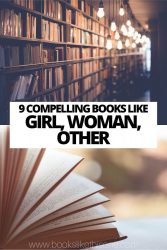 Books like Girl, Woman, Other, Bernadine Evaristo’s 2019 joint Booker Prize-Winning novel, appeal to all sorts of readers. They are character-driven, experimental blurring the boundaries of conventional literature, they are prize-winning with many receiving critical acclaim but above all, they explore incredibly important and relatable themes.

Through twelve different women who are connected in some way, Evaristo expertly dissects issues of feminism, race, immigration, sexuality, gender, abuse, infidelity and family. The first character introduced is the main link to the other characters, Amma a theatre director whose play The Last Amazon of Dahomey is about to open at the National Theatre in London.

Then we meet her daughter — the fiercely opinionated Yazz — and her friend Shirley — a teacher at a school in Peckham who taught other characters appearing in the novel amongst many more women to love, loathe and listen to.

With this list of books like Girl, Woman, Other I’ve tried to choose books that represent different facets of this amazing novel so there should be something here for every reader…

If it is Bernadine Evaristo’s style of writing that has you searching for your next book like Girl, Woman, Other then give her 2014 novel Mr Loverman a try.

On the outside, Barrington Walker is a seventy-four-year-old Antiguan born Hackney local, who enjoys quoting Shakespeare and has a good eye for a retro suit. He is a husband, a father and a grandfather. But on the inside, Barrington is wrestling with his sexuality, a secret he has kept hidden from his family and friends for decades.

Barrington wants to divorce his wife Carmel and live with Morris, his secret homosexual lover, but when you have been living a lie for so long, it isn’t that easy to start living your truth.

Embarrassingly, Evaristo only came on my radar when she won the Booker Prize in 2019 so I have ended up working my way through her extensive repertoire of novels backwards and found Mr Loverman to be an absolute gem.

Evaristo’s expert portrayal of Britain’s older Caribbean community is, in short, trailblazing and depicts the heartbreaking consequences of not being true to one’s self.

Tayari Jones subtly dissects issues of race, prejudice, justice and love with such emotional intelligence in her fifth novel An American Marriage, you are sure to be blown away.

Celestial and Roy are newly married, he’s a young executive, she’s a talented artist, both are on the brink of exciting careers and a lovely life together, they are the epitome of the American Dream. But when Roy is arrested and sentenced to twelve years in prison for a crime he did not commit, their American Dream turns into a nightmare.

Following Roy’s imprisonment Celestial, feeling bereft and alone, seeks solace and comfort from Andre, her childhood friend and Roy’s best man. With each day that Roy is away the pair become increasingly close.

After serving five years in prison, Roy’s conviction is overturned and he is released from prison, eager to pick up where he left off and resume his life with Celestial, never guessing just how much would have changed in his absence.

Jones deftly explores the deep racial prejudice of the American criminal justice system making An American Marriage a sobering read for anyone on the hunt for their next novel like Girl, Woman, Other.

There are a lot of impressive, unforgettable characters appearing in these books like Girl, Woman, Other, but I would say Queenie is probably the most unforgettable of them all.

British-Jamaican Queenie Jenkins is twenty-five years old and already her life is on a downward spiral. She finds herself unfulfilled at work, realises her family will never understand her and she is struggling to get over a man she has just broken up with.

We follow Queenie as she starts seeking solace in all the wrong places, mainly with an assortment of toxic men, and tries to navigate her way back up from rock bottom with a slither of dignity.

Exploring a plethora of weighty issues including mental health, race, class, relationships, pressure and consent in a light and breezy way Candice Carty-Williams has written a truly remarkable debut. As tender as it is candid, prepare to laugh, cry, cringe, relate and root for Queenie.

I find our next novel a wealth of inspiration when developing characters in my own writing, it is Kit de Waal’s Supporting Cast of honest, frank and flawed characters. Each short story in this collection is based around characters that feature in some way in de Waal’s debut novel My Name is Leon.

There’s Sylvia who looks back on happier times with her husband the day she files for divorce. Carol who deserts her children to go in search of the man she loves. Byron Francis just out of prison whose only wish is to see his son again and many many more insightful stories of characters driven by desire, love and loss.

De Waal’s characters are ordinary people and she writes about their lives with depth and insight. If you liked Girl, Woman, Other for all the different characters then make sure you give Supporting Cast a read next.

Diana Evans’ 2018 novel Ordinary People is anything but ordinary. It centres around two couples living in and around South London; Melissa and Michael and Stephanie and Daniel.

Melissa is struggling with motherhood and trying not to lose her sense of self while Michael, though he loves Melissa dearly, can’t quite manage to stay faithful. Stephanie and Daniel are gloriously happy with their three children and their life together until Daniel’s father passes away and his grief throws them into disarray.

Cracks start forming as each relationship begins to disintegrate, becoming loveless over the years but are any of them brave enough to break away and start over or is it braver to stay and keep your family together?

Evans writes about identity, parenthood, sex, grief, friendship, marriage and love so intimately, her distinctive prose is one of the many many reasons you should read Ordinary People, a dazzling book like Girl, Woman, Other.

Cloud Atlas ticks a lot of the boxes for those searching for their next novel like Girl, Woman, Other. There’s a myriad of characters all inextricably linked. It ruminates on deep topics like existence, one will to power, love, greed, identity, the future and reality. Overall it is an experimental, Booker Prize Shortlisted literary feat!

Electrifying and adventurous David Mitchell’s mile-a-minute novel spans decades, from seafaring pasts through to a chilling dystopian future and back again.

It starts with Adam Ewing journaling his journey from the Chatham Isles to his home in California in 1850, then to Belgium in 1931 to meet Robert Frobisher a bisexual composer, then to the 1970s with an investigative journalist on the brink of discovering the biggest story of her life and beyond.

As you read on you realise how all these seemingly unconnected characters connect with interlocking fates and souls that drift through time and through the pages of the book like clouds across the sky.

Each character’s story could form a credible narrative in their own right but linked together make Cloud Atlas a truly explosive read.

Our next novel like Girl, Woman, Other is a modern reimagining of Sophocles’ tragedy Antigone using the plight and discrimination faced by British Muslims, it is the masterful Home Fire by Kamila Shamsie.

After too long spent raising her younger twin siblings — Aneeka and Parvaiz — following their mother’s untimely death, Isma is free.

She is finally able to do all the things she dreamed, including studying in America, yet she can’t stop worrying about Aneeka left behind in London or Parvaiz who disappeared to prove himself to the Jihadist father he never knew by joining ISIS.

When the son of a British Muslim diplomat enters Isma and Anneka’s lives he becomes both a chance at love and a possible salvation for their brother, but anyone who knows the fate of Antigone knows that this sadly will not be the case.

A compelling story of love and loyalty, Home Fire offers an eye-opening look at the life of Muslims living in Britain, a must read.

If you liked Girl, Woman, Other for the the way it reads like twelve separate stories, then what better next book than a collection of short stories by one of the best writers and thinkers of our time, it is Zadie Smith’s Grand Union.

This collection reads across genres, perspectives and across history, the stories are funny, nuanced, thoughtful, chilling and explore important topics yet they aren’t opinionated nor do they read like a lecture.

In the story ‘Downtown,’ Smith dissects African-American history referencing events where Black men have been killed unnecessarily by police all while the Dr Christine Blasey-Ford and Brett Kavanaugh case plays out.

In ‘Big Week’ she makes you empathise with her disgraced police officer character even though he’s unlikable, revealing too much of himself and his past to those who ride in his Uber. In ‘Sentimental Education,’ forty-something mother Monica looks back over her sexual past ruminating on the many facets of desire and love.

Though technically short stories, (though a short story by Smith is anything but short), each one in Grand Union packs a punch and will leave you with plenty to think about as with anything Smith writes.

The Bastard of Istanbul, by Elif Shafak

Migration, feminism, sexism, secrets, religion, troubled histories and abuse are just some of the topics our next book like Girl, Woman, Other covers — it is The Bastard of Istanbul by Elif Shafak.

In discreet Turkish society, Shafak tackles the taboo as her novel opens with her nineteen-year-old unmarried character rushing through the streets of Istanbul trying to make her way to a clinic for an abortion. Fast forward twenty years and Asya Kazanci, the titular bastard, lives with her mother and three aunts, she is headstrong, intelligent, loves Johnny Cash and is eager to learn more about her father.

When her Armenian-American cousin Armanoush turns up on their doorstep one day, she and Asya become fast friends little realising they have a lot more in common than initially realised. As along with Armanoush’s shock arrival, familial secrets long since buried start to emerge.

Colourful, transportive, eye-opening, electric, haunting, bold, powerful, shocking are just some of the many words to describe The Bastard of Istanbul.

Books like Girl, Woman, Other challenge you, they challenge your literacy, your beliefs, your illusions they are compelling and quite rightly deserve the acclaim they receive.

Are you searching for more books similar to Girl, Woman, Other? Have any recommendations that didn’t make the list? Let us know in the comments! 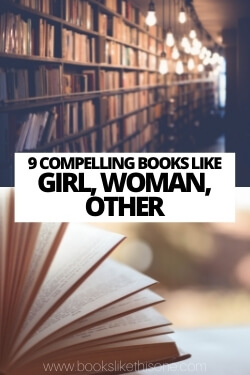