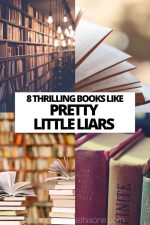 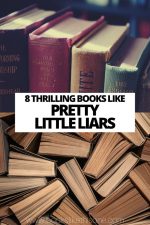 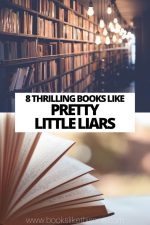 The books were inspired by the author’s childhood living in Philadelphia, which is also the setting for the novels.

There are four arcs to the series which follows each ‘A’ to their reveal. ‘A’ is an unknown character that provides the main plot of the story.

The Pretty Little Liars are best friends Aria, Hanna, Alison, Emily and Spencer. Alison is the cog in ‘the liars’ wheel and she knows all their secrets. One night during a sleepover, Alison goes missing; no body was ever found and the group eventually move in different directions.

The story continues three years later when they all begin receiving messages from someone calling themselves ‘A’ who confesses to knowing each of the girls’ secrets.

If you are hunting for more mysteries to unravel in books like Pretty Little Liars then read on!

The Best Lies, by Sara Lyu

Sharing the complexities of transferring into adulthood is always made easier if you have a best friend to share it with. BFF’s are often more important than family through those confusing times of change but when a third person threatens to disrupt this delicate dynamic, the consequences can be serious or as in The Best Lies – deadly.

The Best Lies is told in alternating narratives between the past and the present. Remy Tsai and her best friend Elise are as close as two friends can be: they share everything including their hopes and dreams. That is, until Jack enters Remy’s life.

Jack is kind and sweet and Remy falls for him but where does that leave Elise?

The inciting incident happens when Jack is shot in the chest and Elise is found holding the gun. She is claiming self-defence but Remy has to figure out the real story and hope that it allows her to save their friendship.

So, if you are searching for books like Pretty Little Liars then this could be a good choice.

All Your Twisted Secrets, by Diana Urban

In this mystery book similar to Pretty Little Liars a collection of our favourite characters from high school including, bad boy, miss popularity, music geek and athletic star are invited to a scholarship dinner but there’s no food being served.

They are trapped in a room with a syringe filled with poison, a bomb, and a note telling them to choose someone from the group to die within the next hour or they will all die.

The story oscillates between the present danger and each student’s own life. This lip-biting thriller will have you questioning your own past indiscretions.

If you enjoy novels like Pretty Little Liars and need another puzzle to solve, then join our protagonist, Amber Prescott, in All Your Twisted Secrets and try to discover what each of the people in the room have done in the past that could possibly connect each one of them to their captor  – whoever they may be.

One of Us is Lying, by Karen Mc Manus

Staying on the theme of secrets and lies, this book like Pretty Little Liars is a mystery based around one dead student and four other students who are suspects in his death.

Five students are in detention at Bayview High:

Simon: Creator of a school app that spreads gossip about the students.

Bronwyn: An excellent student hoping to be accepted into Yale.

Nate: On the road to a life of crime.

Simon drops dead after drinking a glass of water and the police reveal that he was due to publish terrible secrets about each of the other students in detention with him. This makes them all suspects in his death.

What would you be willing to do to stop your darkest secrets from being revealed to the whole school? If you want to know who did it, grab a copy of One of Us is Lying.

Already read this novel? Check out our list of more books like One of Us is Lying!

If you’re a fan of Agatha Christie as well as Pretty Little Liars then Truly Devious will provide you with plenty of intriguing clues to follow. Our heroine is Stevie Bell a first-year student with a love of old crime cases.

When she starts at Ellingham Academy for gifted children, she finds out about an unsolved mystery involving the founder’s wife and child who were kidnapped back in 1936. The only clue found was a note containing a puzzle and signed ‘Truly Devious’. The case was never solved.

Now, Truly Devious is back; a student has been killed, and Stevie has two mysteries to solve.

This book similar to Pretty Little Liars is part of a series and has won several awards so why not download it to your e-reader or maybe if you’re really a fan of old crime novels buy the novel to adorn your bookshelf.

Although better known for his adult crime thrillers, this book like Pretty Little Liars by James Patterson will have you channelling your inner Alex Cross.

Theo Foster has resigned himself to never fulfilling his dreams after a photograph from his hacked Twitter account goes viral, which leads to him being expelled from school.

With his future in the toilet, he gets a job at a mini-mart where the lovely Sasha Ellis informs him that she has also been expelled for something she didn’t do. Theo is keen to impress Sasha and decides to launch his own investigation into who hacked their accounts and why.

Theo finds out that they are not the only students who have been expelled; there are two others. To get to the truth, he uncovers the terrible secrets his suspects are hiding, including parental abuse, suicide and rape. He needs to know who is behind this and he needs their confession on camera to be taken seriously.

If you are a fan of James Patterson then you may want to try Expelled.

The Color of Lies, by C J Lyons

Ella Cleary’s family have a rare condition that jumbles the senses called synaesthesia. Her uncle tastes words; her grandmother sees sounds and Ella can detect people’s emotions through the colours they emit.

Her parents died in a fire when she was young – or so she thought until Alec turns up on her eighteenth birthday enquiring about her parents’ murder.

Ella’s adoptive family have kept this secret from her and now her life feels like it’s been turned on its head. Who has the truth about what really happened to her parents and why doesn’t anyone want her to know?

Ella wants to find out who killed them and why.

If you enjoyed Pretty Little Liars and love a good mystery that will keep you guessing right to the end, then may I suggest, The Color of Lies.

All the Pretty Things, by Emily Arsenault

If you enjoyed Pretty Little Liars then All the Pretty Things will get you captivated all over again. Don’t let the title fool you, this mystery is dark and emotive.

Every summer, Ivy Cork works at her dad’s amusement park, as do lots of her friends from school including her best friend, Morgan.

One day, Morgan comes across the dead body of nineteen-year-old Ethan Lavoie; a park worker with Downs syndrome. It looks like he fell from a train trestle but Morgan ends up in a hospital psych ward and she’s not making any sense. Even ivy can’t get through to her.

It becomes obvious to Ivy that not everyone is telling the truth about the accident and she needs to get to the bottom of what really happened. Even though she might wish she hadn’t.

If the juxtaposition of a murder in the setting of an amusement park floats your mystery boat then give All the Pretty Things a read.

We Were Liars, by E Lockhart

The story is told by our protagonist, Cadence (Cady) Sinclair. She spends her summers with her affluent parents and three of her cousins on Beechwood Island. The four friends are inseparable and are affectionately tagged ‘The Liars’.

It’s idyllic until the summer when Cady is fifteen and she has a horrible accident that leaves her with amnesia. She has no idea what happened and the rest of ‘The Liars’ stop coming around when they get back home to Boston.

What happened on that island is still a mystery. No one will talk to Cady about the accident and the consequence is that her family is being torn apart. There are too many secrets being kept and lies being told. She needs to uncover the truth before anyone can begin to heal.

Pay attention when reading We Were Liars; you’ll need your wits about you for the shocking twist at the end.

A good mystery book like Pretty Little Liars can keep you up at night as you desperately flick the pages trying not to peek at the next chapter to find out what happened. They can infiltrate your days with, ‘I wonder if she did it because…’ and they always leave you satisfied that the mystery is eventually solved. This is why they are my favourite genre to read.

Are you looking for more books like Pretty Little Liars? Have any recommendations that didn’t make the list? Let us know in the comments! 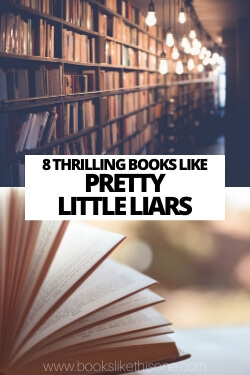