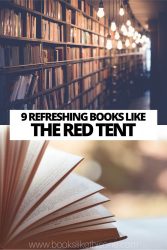 There is more than one way to tell a story and books like The Red Tent are testament to that!

In Anita Diamant’s 1997 novel, readers get an insight into what life was like for women during biblical times by giving voice to a previously voiceless figure, Dinah. Dinah is scarcely mentioned in the Bible, with her name appearing briefly in the Book of Genesis which concentrates on her father Jacob and his twelve sons.

Told from Dinah’s perspective, Diamant’s spellbinding novel not only retells Dinah’s story but also uncovers the traditions of ancient womanhood, such as the titular red tent where women would convene when menstruating or giving birth, as well as the troubles faced by them.

On this list of refreshing books like The Red Tent, I have chosen other retellings which give readers a modern take on well-known stories or events in history, as well as books that give voice to those previously muted. They offer a fresh perspective that will alter the way we view history, religion, legend and so much more.

The Other Boleyn Girl, by Philippa Gregory

Philippa Gregory is a Queen among other historical authors, having written an abundance of novels set during Tudor England concerning notable monarchs such as Mary Queen of Scots, King Edward IV and Henry VIII to name a few.

Gregory has many novels to choose from that readers of books like The Red Tent will enjoy, however, I have selected The Other Boleyn Girl thanks to its look into the role of women during the reign of the Tudors.

At fourteen, Mary Boleyn catches the eye of a young Henry VIII and falls madly in love with him and the idea of one day being his Queen. Unfortunately, Mary loses out to her sister, Anne, quickly realising she is just a puppet in her own family’s ambitions and aspirations for the future.

The Other Boleyn Girl is a compelling read, rich and descriptive bringing to life the politics, motivations and desires of the most exciting and glamorous court in Europe.

Like Philippa Gregory with historical fiction, Madeline Miller is fast becoming renowned for her Mythical retellings and her novel Circe is next on this list of books similar to The Red Tent.

Circe is born to Helios, god of the sun and Perse, a female water nymph, yet she strangely possesses no divine powers herself. Rejected by her family, Circe seeks solace amongst mortals and by learning witchcraft which results in her banishment to a remote island.

Here she perfects her sorcery and becomes entwined with many well-known characters which feature throughout Greek Mythology, such as Hercules, Daedalus and Odysseus, playing a role in their story’s.

As Circe’s own story intensifies, so too do her powers of witchcraft forcing her to make a difficult decision; stay among the mortals or return home to be among the gods.

Fiercely feminist, Circe is the electrifying story of a goddess with a human heart, Miller weaves a startling narrative giving voice to one of Greek Mythology’s most misunderstood female figures.

The Historian, by Elizabeth Kostova

From rewrites of biblical stories, Greek myths and historical events to the legend of Vlad the Impaler, and ultimately Dracula, in our next novel – it is Elizabeth Kostova’s part epistolary novel The Historian.

While exploring her father’s library one night, our narrator finds an ancient leather-bound book and a pile of old letters addressed to “My dear and unfortunate successor…”

Set across different countries and time periods, these letters leave hints that the barbarous Vlad the Impaler, who inspired Bram Stoker’s Dracula, is still alive and continuing his centuries-long reign of terror.

The narrator’s father is embroiled in discovering the truth, as were many esteemed professors and historians before him, so she continues his journey to startling and unexpected ends.

The Historian is so much more than another scary vampire story, it delves into Dracula’s origin story and brings it forwards through the decades with an innovative twist making it the perfect novel like The Red Tent.

The Silence of the Girls, by Pat Barker

If you liked The Red Tent for the female perspective on a formerly male-dominated story then you will enjoy our next book which describes the events of the Trojan War under the female gaze, it is The Silence of the Girls by Pat Barker.

More fully Barker’s novel is a revision of the Homeric epic The Iliad, and stories such as these are dominated by the male aspects of war, the winners the losers, the heroes and villains. But what of the women, what happens to them when their fathers, brothers, husbands, sons are killed in battle? It is this that The Silence of the Girls explores.

Briseis, Queen of a Greek kingdom next to Troy, has her life transformed when she is captured by Achilles becoming herself a spoil of war. Briseis narrates from her new role as a slave and provides readers with invaluable insight and descriptive detail from the front lines of war.

Barker’s prose is breathtaking to read, The Silence of the Girls is a startling narrative highlighting the importance of not only who tells a story but also why.

Our next book like The Red Tent reiterates my previous statement that there are many ways to tell a story, Lavinia is another refreshing retelling of events surrounding the Trojan War.

Drawing inspiration from the last part of Virgil’s Aeneid, Ursula K. Le Guin tells Lavinia’s story bringing her out of the shadows where you will usually find her in other versions.

Fated to marry Aeneas, a heroic Trojan, Lavinia, like many women of the time, was the silent bolster supporting her spouse while he fought and forged empires — that is not the case in this story. Conversing and arguing with Virgil himself, Lavinia takes control of the narrative and rewrites her story herself.

Le Guin is perhaps best known for her Sci-Fi and Fantasy novels however with Lavinia, she weaves a gloriously emotive feminist tale of war, destiny, love, family and duty that is certainly worth a read.

Sometimes it is certain individuals who are remembered from events in our collective history, just like particular characters can dominate fictional stories, and in British monarchy, none are more notorious than King Henry VIII.

But what about the figures close to these infamous faces? Hilary Mantel dissects this in her booker price winning trilogy about Thomas Cromwell, chief minister to the king, and I have included the first in the trilogy Wolf Hall on this list.

Mantel traces Cromwell’s origins, from his childhood spent being beaten by his Blacksmith father all the way to becoming an influential royal aid in a real-life rags to riches tale with all the grit and ambition that goes with it.

Mantel has proved herself to be one of the greatest living writers thanks to the success of Wolf Hall and the two other novels in this trilogy, Bring up the Bodies and The Mirror and the Light. All three are the perfect escape for readers looking for their next novel like The Red Tent.

The Five: The Untold Lives of the Women Killed by Jack the Ripper, by Hallie Rubenhold

Historian Hallie Rubenhold sets the record straight in her powerful and astonishing debut about The Five: The Untold Lives of the Women Killed by Jack the Ripper.

Their names were Catherine, Polly, Annie, Mary-Jane and Elizabeth.

They were composers, ran coffee houses, evaded people traffickers and worked in printing.

They came from London, Wolverhampton, Sweden and Wales.

They were all in the wrong place at the wrong time.

They were so much more than their ends.

Taught widely that they were unsavoury ladies of the night walking the streets, little more is ever disclosed about these five women who never met each other but all met the same unfortunate and violent end.

The Five is a fitting read for any fan of novels like The Red Tent, in writing this book not only does Rubenhold give voice to these women she highlights the misogyny surrounding the case at the time and for decades after.

Kamila Shamsie’s modern-day reimagining of Sophocles Antigone is incredibly timely, dissecting the trauma and turmoil many British Muslims face, it is her seventh novel the searing Home Fire.

After years spent raising her younger twin siblings, Aneeka and Parvaiz, following their mother’s untimely death, Isma is now free to follow her own path.

Despite living her dream studying in America, Isma can’t stop worrying about Aneeka alone in London and Parvaiz who left the UK to follow in the footsteps of his Jihadist father. Both Isma and Aneeka become involved with the son of a political figure and hope he holds the key, and the power, to bring Parvaiz back home.

If you are familiar with the fate of Antigone, you will be able to pre-empt the devastating fate that awaits Isma and her family, despite this Shamsie’s take on the story and style of writing is reason enough to read it.

Beautifully written and compelling in articulation, Home Fire is a tour de force perfect for anyone looking for a book like The Red Tent.

Wicked: The Life and Times of the Wicked Witch of the West, by Gregory Maguire

The story of Dorothy, Oz and the Wicked Witch is famous and recognised by the masses, but in his book, Gregory Maguire explores the question can anyone be born truly wicked?

The answer forms the narrative of Wicked: The Life and Times of the Wicked Witch of the West and offers readers a back story for the titular green witch called Elphaba detailing how this misunderstood character turned out to be one of the most infamous in literature.

Elphaba is born into a world where animals can talk and are struggling for their rights, all they want is to be treated with equality but so many want to return them to their natural habitats. Enter Elphaba who knows all too well what it is like to be judged, persecuted and overlooked.

Rife with allegory, Maguire expertly navigates his way around the nature of good and evil through political, social and ethical commentary.

Wicked is an electrifying read worthy of its acclaim (and long spell on Broadway and the West End), the perfect novel to finish this list of refreshing books like The Red Tent.

What I love most about books like The Red Tent is I get to relive some of my favourite stories again but from another perspective breathing new life into stories I thought I knew so well, I hope you enjoy this aspect and the many more the books listed here have to offer.

Are you looking for more books like The Red Tent? Have any recommendations that didn’t make the list? Let us know in the comments! 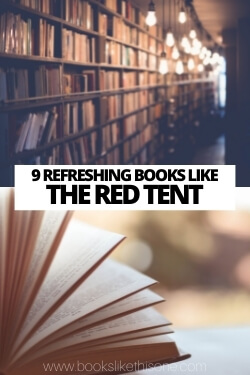