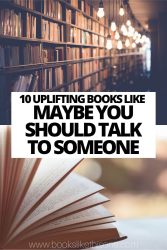 No matter what you’re going through, books like Maybe You Should Talk to Someone will not only help in your self-improvement journey, but they will make you feel understood.

In this book, Lori Gottlieb shares various stories, including her own, about therapy. Because she’s a therapist herself, she knows how important it is to speak to someone, so she seeks out a therapist after a breakup that leaves her confused.

While we learn more about some of her more complex patients and how Gottlieb relates to them, the book also encourages readers to take charge of their lives and get comfortable with asking for help.

Marry Him, by Lori Gottlieb

Written by the same author as Maybe You Should Talk to Someone, Marry Him is an interesting take on dating, finding “The One” and settling for someone close enough.

In this book, Gottlieb interviews women and men of different age groups, some single and others in committed relationships, as well as experts.

Gottlieb shares her own dating stories and how she’s trying to figure out why she’s still single at 41 years old. From her discussions with others, she starts to see that maybe she was too picky and unrealistic in the past like so many other people are.

In her quest, Gottlieb explores some possibly sensitive topics, but she does it with care and to better understand where she has gone wrong so she can fix these issues as well. She gives readers a peek into the modern dating world in hopes of stopping others from making the same mistakes.

Whether you’ve found “The One” or still searching, you can learn many fascinating things from this book and maybe even a few things about yourself.

Untamed, similar to books like Maybe You Should Talk to Someone, inspires readers to choose the path that leads to happiness and to being one’s true self.

The author shares stories about her life and experience as a gay woman, mother and divorcee. She is honest about each topic and about learning that it’s okay to be selfish sometimes.

Doyle knows that most people believe a mother should put her kids first, but she has figured out that people must live for their own happiness to be able to show their kids how to do the same and for them to be kind to themselves.

So here is your wake-up call if you’re ready to trust yourself and become Untamed.

While there are many heartbreaking stories about the Holocaust, Man’s Search for Meaning is filled with so much hope and inspiration.

In the memoir, Frankl recounts his time in the concentration camps and discusses how he learned to cope in this terrible situation.

Even though the devastating circumstances are not comparable, the aspect of searching for meaning to get through suffering is similar in books like Maybe You Should Talk to Someone.

As such a powerful and influential book, readers in any situation or time can take so much from Frankl’s theory to help them improve themselves and their lives.

From the outside, it appears that Marisa and Jake’s relationship is moving in high-speed. From dating to moving in together and agreeing to have a baby within a few months of knowing each other, you might be left wondering why they’re in such a rush.

The two are perfect for each other and everything seems to be going as planned, they’ve gotten pregnant and moved into a beautiful house until they allow a lodger to rent one of their rooms.

Jake promises that Kate, the lodger, will only be staying with them temporarily but Marisa doesn’t trust the woman around Jake and how she crosses their boundaries.

As Marisa investigates Kate’s life, she realises this woman can destroy her perfect world. But there’s more to the story and Kate’s perspective might shine a light on the truth.

Such a Fun Age, by Kiley Reid

Such a Fun Age covers the important topic of privilege and racism with a focus on people who pride themselves on not being racist but on some level still are.

The book starts with Emira, who is a black woman and babysitter, getting accused of kidnapping the child she’s caring for because the girl is white. The whole experience is traumatic to Emira and makes her see her employers in a different light.

We also get the perspective of Emira’s employer Alix, who tries so hard to have the outside world see her a certain way but sometimes her mask slips and you see who she really is.

Like other authors to books similar to Maybe You Should Talk to Someone, Reid includes thought-provoking moments to expose and peel back the layers on each character.

Have you already read this novel? Check out our list of books like Such a Fun Age!

The Farm, by Joanne Ramos

Imagine getting hired to live in a retreat where you have free amenities, which includes personal trainers, massages and healthy meals, and you even get paid to be there? The only catch is that you can’t leave for nine months and must carry someone else’s baby.

The Farm focuses on a few of the “hosts” who were hired to have children for wealthy women and the main retreat director.

As we learn the ins and outs of the Farm, it becomes evident that there is more to the story than meets the eye. Like how the arrangement is exploitative to the hosts, especially when they give so much for this job.

While some of the women paying for this service are career-focused, others may have issues with their age, fertility, relationship status or other reasons.

The discussion of taking charge and going a different route with pregnancy is similar in Maybe You Should Talk to Someone.

Over the Top, by Jonathan Van Ness

As one-fifth of the iconic Fab Five from the show Queer Eye, Van Ness has made so many people fall for him as he grooms and promotes self-care for all.

In his book, he shares stories about his childhood, his dreams of winning an Olympic medal and other moments that led him to become so Over the Top.

While he is the poster child for self-love, it wasn’t always so easy for him but by sharing his story he hopes others will find their spark to love themselves. This theme is similar in books like Maybe You Should Talk to Someone.

You Are a Badass, by Jen Sincero

For people looking to make some serious changes to improve their lives, this book is the inspiring guide you need for the ride.

Through her telling of personal stories and advice, Sincero’s humorous voice is heard loudly throughout the book.

Some of the main points of the book include learning to take risks, setting goals and reaching them, how to make money and trusting “The Force.”

However, one of the most important pieces of advice in the book is to be kind to yourself, which also means to stop doubting that You Are a Badass.

Three Women focuses on Lina, Maggie and Sloane who are all learning to live with certain issues in their lives, along with learning to celebrate the different ways to be women.

The stories of each woman are told similarly to books like Maybe You Should Talk to Someone, with the author having interviewed the ladies over a ten-year period.

Two of the women struggle with intimacy in their marriage, while the other is trying to overcome the fallout of having had an affair with a teacher. Even when they appear fine to the outside world, the women are close to breaking down.

As the years continue and the women learn that they don’t have to fit the mould that was created for them, they can start to become their true selves.

The trio of podcasters who created the Lady Gang wrote a book to empower women to be themselves completely without apologising for it.

The ladies share stories about everything from their dating years, careers, body image, friendships, marriage and all the embarrassing moments in between. While some stories are hilarious, others are cringe, but the point is to show there’s no right way to Act Like a Lady.

Similar to books like Maybe You Should Talk to Someone, the ladies encourage readers to embrace who they are and not to be afraid to ask for help when needed.

This list of books similar to Maybe You Should Talk to Someone are more than just self-help or self-love books. While they are often informative, they are also very entertaining and you will almost always learn something new from the inspiring stories.

Are you looking for more books like Maybe You Should Talk to Someone? Have any recommendations that didn’t make the list? Let us know in the comments! 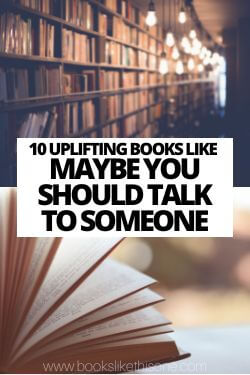