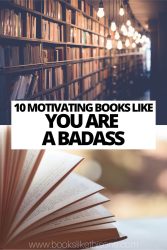 For those looking for some inspiration and a sign to improve their lives, books like You Are a Badass are just what you need.

In this book, you will get an entertaining retelling of the different moments that inspired the author, as well as a guide and advice on how to make the impactful changes you’ve always wanted to make but didn’t know how to.

So if you’re ready to truly believe in yourself and make some serious changes, then here are the books to help you embrace your inner badass.

The Gift of Imperfection, by Brené Brown

For years Dr Brown studied the ins and outs of topics such as shame, courage, connection, compassion and more. In this book, she focuses on embracing imperfection and actively living wholeheartedly.

While some may think that you just learn about living wholeheartedly and are simply good forever, you actually have to work on living this way every day. You have to choose to be courageous, compassionate and connect with others.

Brown explains how shame is all around us but learning to let go of it can help us get closer to feeling worthy and opening ourselves to true happiness.

When you let go of others’ expectations or doing what you think you should be doing but don’t like then you give yourself the chance to receive The Gift of Imperfection.

We Should All Be Millionaires, by Rachel Rodgers

Who says women are bad at managing money? Besides the media and anyone trying to keep women at a disadvantage.

We Should All Be Millionaires breaks down the myths surrounding women and money to encourage more women to work on achieving their goals.

Rodgers discusses moments in history that made it almost impossible for women to succeed in a man’s world but she also includes the stories of those women who beat the odds.

The book gives a realistic guide on how to work towards making more money. Some things are as simple as asking for a raise to match the amount of work you do or even hiring someone to help with housework to give you more time to work on your future.

So don’t worry, you can continue to buy your favourite coffee because we’re making bigger moves, changing our attitude and getting what we deserve.

The Moment of Lift, by Melinda French Gates

Thinking back to the numerous trips she took to better understand people and how to help those most in need, Gates shares her experience and the stories of the people she met along the way.

In The Moment of Lift, we get deeper into the harsh lives people have to endure in some of the poorest places in the world and how women are especially affected.

Gates shares her belief that in order to advance these societies, women should be the core of investments made there. Because when women are lifted up, they lift their communities up alongside them.

The book also includes tips the average person can incorporate to create change, like in books similar to You Are a Badass. Who knew believing in yourself and others could make such a big impact in the world?

While talking about finance can be difficult, thinking about it and taking action to maximise your money can make all the difference.

In Rich Bitch, Lapin acknowledges the issue with many women not being interested or even given information about big topics having to do with their financial decisions. She herself has studied and worked in finance for years so she understands the value of teaching others about it.

The book gives a 12-step plan so people can get their financial life together and by giving advice through her fun, sassy stories she makes it an entertaining but educational read. She also adds some mistakes she’s made which can make the reader feel better about any mistakes they’ve made in the past.

So if you’re ready to save big, pick up this book, open up your spreadsheet and start working towards the financial future you desire.

Similar to books like You Are a Badass, Untamed is meant to inspire readers to believe in and trust themselves to live for their own happiness. Through her stories, Doyle shares her journey to finding happiness and unleashing her true self.

She discusses the importance of being selfish, especially when having kids because they need to learn to put themselves first and to fully live. If kids see their parents loving themselves and doing what makes them happy then they will learn to do the same.

Making mistakes is part of the process as long as you’re staying true to yourself and working on improving any situation that doesn’t add to your happiness.

So if you’re tired of living the way others expect of you and are ready to break out of your cage, then this is a great book to help you get started.

Marry Him, by Lori Gottlieb

While Marry Him is focusing more on relationships, it also encourages readers to take their lives into their own hands similar to books like You Are a Badass.

Through interviews with both women and men of various age groups and relationship statuses, Gottlieb collects stories and research on finding “The One.”

In the book, Gottlieb shares stories from her own dating journey and those she interviews, including failures and advice she’s picked up along the way from experts and successful couples.

Although oftentimes people grow up believing and expecting to find the perfect prince charming we were promised by fairytales, “settling” for Mr Good Enough could make you even happier.

Over The Top, by Jonathan Van Ness

Growing up in the midwest of the United States, Van Ness didn’t always fit in, but thanks to a supportive mother, he didn’t even have to try.

He was free to be Over The Top even when people talked and stared at him. And even though there were moments when he had to work on ignoring others’ hateful comments, he stayed true to himself.

Now, almost everyone knows him from the TV show “Queer Eye”, where he grooms people and encourages self-love, so he didn’t let the haters get to him.

But in his books, we get a front-row seat to his journey to where he is today and to him letting the badass in him out.

Being one of the most influential and iconic women in the world comes with its perks but also some drawbacks that Michelle Obama has had to learn to deal with.

In Becoming, the reader gets a special look through Obama’s life before, during and after becoming the First Lady, along with everything that came with the job.

Through her honest stories and throughout her life, Obama has worked to improve others’ lives. Whether it was through children’s nutrition programs or empowering women to fight for their dreams, she inspired people with her words like other authors from books similar to You Are a Badass.

The Witch Doesn’t Burn in This One, by Amanda Lovelace

Slightly inspired by well-known fairytale witches, The Witch Doesn’t Burn in This One is written with a spin so the author can tell her own stories through the witch.

Similar to books like You Are a Badass, this poetry book shares stories of healing, resilience and becoming powerful after going through trauma.

Through her experience, Lovelace encourages people to be indestructible and fight back against any prince trying to quiet their inner witch.

The poems touch on difficult issues affecting women and show how the witch not only overcomes them but raises from the ashes. And while the witch is safe in this one, anyone trying to get in the way of her happiness is not.

Although fiction, If I Never Met You shows what happens when a person starts working towards their own happiness and realises their own greatness like other books similar to You Are a Badass.

When Laurie is dumped after almost two decades of dating her boyfriend and with him insisting there isn’t anyone else, she is left confused.

Laurie feels that it must be her fault somehow even though she gave him her “best” years and helped him advance at the law firm they both worked at. Now she regrets putting his career before her own and not asking for the raises she worked hard for but didn’t want to be seen as being difficult.

When she starts fake dating the playboy of the office, Jamie, he helps her see how great she is and slowly starts to build her confidence.

Will Laurie finally be able to ask for what she wants in both her career and love life?

Most people probably don’t desire to live unfulfilling and unhappy lives, so why settle when you can work on reaching your goals? If you are looking for a reminder of your greatness and need some motivation then books similar to You Are a Badass have you covered.

Are you looking for more books like You Are a Badass? Have any recommendations that didn’t make the list? Let us know in the comments! 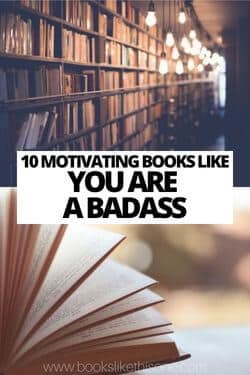