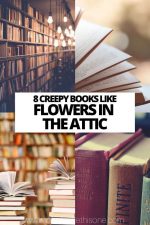 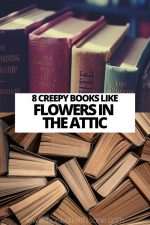 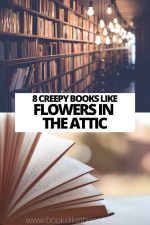 Books like Flowers in the Attic have all the components of a best seller, they have obsession, fatal attraction, mystery, suspense, entrapment, death… They also have an element of horror, a dark incomprehensible edge to the narrative which stays with the reader long after they finish the book, in the case of V.C. Andrews’ gothic novel, the darker edge is the portrayal of child abuse and incest.

In Flowers in the Attic, the four Dollanganger children were happy until their father tragically died and they, along with their mother, had to move in with their grandparents. With their existence unknown to their grandfather and their arrival unwanted by their grandmother, the children are locked away in the attic while their mother sought to repair relationships, allegedly.

The days imprisoned in the attic turn into years until it becomes clear, the children need to leave their mother behind if they have any hope of survival. Luckily for fans of V.C Andrews, she has made a series of books about the Dollanganger children, but for those wanting more stomach-churning compulsive page-turning books like Flowers in the Attic, check out the creepy titles listed below.

The Doll-Master and Other Tales of Terror, by Joyce Carol Oates

Too afraid to indulge in another full-length creepy novel like Flowers in the Attic? Then this collection of shorter stories from one of the queens of horror Joyce Carol Oates may just be the ticket for you as The Doll-Master and Other Tales of Terror is perfect for those who like to be scared in smaller doses.

Comprising of six separate stories, Oates invites readers to explore the abominable, to witness the obscene and investigate the darkest of mysteries. In the titular story, a young boy becomes so obsessed with a doll belonging to his dead cousin that he begins collecting dolls of an altogether different kind.

In ‘Big Momma’ a young girl is drawn to the father of her best friend and their rather unusual house pet then there’s the student who unwittingly accepts to housesit for their favourite teacher only to find themselves fending off a violent intruder in ‘Gun Accident.’

As bold as they are unsettling, The Doll-Master and Other Tales of Terror is a digestible way to get your creep on!

We Need to Talk About Kevin, by Lionel Shriver

Lionel Shriver’s We Need to Talk About Kevin is another gripping story about motherhood gone awry. An epistolary narrative comprised of letters from Eva to her estranged husband Franklin discussing the actions of their son, the eponymous Kevin, in a startlingly frank and honest correspondence.

Kevin was always a difficult child, regarding everyone with contempt and hatred which ran deeper and grew stronger as he grew up, so much so that a few days before his sixteenth birthday, he goes on a killing spree at his high school murdering several fellow students and faculty.

These letters disclose some of the more disturbing details of Kevin’s childhood, Eva’s reluctance as a mother and their relationship now as Kevin approaches his eighteenth birthday and is soon to be transferred to a maximum-security prison. It is easy to blame the parents and Shriver’s novel expertly explores this notion along with the eternal debate on nature versus nurture.

If you liked Flowers in the Attic for the darker familial aspects then We Need to Talk About Kevin will make a great next read for you.

Dennis Lehane said he wanted to create something which blended the work of the Brontë sisters with the film Invasion of the Body Snatchers when talking about his novel Shutter Island, which is rather an odd combination but one that totally works.

U.S. Marshal Teddy Daniels and his partner Chuck Aule have been assigned a case on the illusive Shutter Island home to the Ashecliffe, a hospital for the criminally insane.

A violent hurricane batters the island as Daniels and Aule try to investigate the disappearance of murderess Rachel Solando, they start uncovering evidence of horrifying surgeries, extreme experimentation and soon realise that someone is aggressively working against them.

As the hurricane worsens and their investigation deepens, we slowly start to see that nothing and no-one is quite as they seem, including Teddy… Shutter Island is an eerie and psychologically charged novel that will keep you guessing until the bitter end, a novel sure to satisfy readers of creepy books like Flowers in the Attic.

The neurotic and hypochondriac mother Adora Crellin in Gillian Flynn’s award-winning novel Sharp Objects is reminiscent of some of the other unhealthy parenting appearing in books similar to Flowers in the Attic.

When Camille Preaker, a Chicago-based journalist, has to return to her home town of Wind Gap to report on the strange murder of a teenage girl and the disappearance of another, a lot of old wounds start to reopen (literal and figurative).

Camille’s younger sister Marian sadly died when she was a child and since then her relationship with her family has been strained, her return means she is reunited with her estranged mother and meets her spoilt half-sister Amma, becoming embroiled once again in the toxic household.

When the missing girl’s body is discovered in an alley in the same vain as the other investigations ramp up to find a serial killer, Camille soon realises she must unlock secrets to her past if she ever wants to solve the murders and leave Wind Gap behind for good.

A gripping narrative though unnerving and unpleasant at times, Sharp Objects is truly unputdownable and worthy of its great acclaim.

Have you already read this gripping novel? Check out our list of more books like Sharp Objects!

The Collector, by John Fowles

We return to unwanted captivity in the next novel on this list of books like Flowers in the Attic with John Fowles’ literary debut the psychologically thrilling The Collector.

Due to his lack of social skills, Frederick never formally approaches Miranda but believes that one day she will learn to love him, so he abducts her and holds her captive in the cellar of his rural Sussex farmhouse as part of his collection of beautiful things.

The narrative is divided between Frederick’s point of view as unhinged captor and Miranda’s as his unwilling prisoner, we see the many attempts she makes to escape as she tries to understand and reason with Frederick.

The Collector is an eye-opening look at the differing perspectives of victim and perpetrator, a truly haunting read.

The Haunting of Hill House, by Shirley Jackson

Though we have established that not all creepy stories need ghosts and the supernatural to be scary, in the case of our next book, it certainly gives it its fear factor.

The Haunting of Hill House by Shirley Jackson is said to be one of the best literary ghost stories of the 20th Century and has formed the basis of two films, a play and a recent Netflix series. It tells the story of four seekers of the paranormal who volunteer to be guests at Hill House, a house notorious for its spooky encounters and inexplicable phenomena thought to be responsible for the deaths of its former inhabitants.

All four guests have experienced poltergeists and similar oddities in the past and their stay at Hill House initially proves to be nothing out of the ordinary until, the house begins gathering power to choose one of the guests as its own.

Jackson’s literary talent keeps readers guessing as much as her characters as to what is real and what isn’t, The Haunting of Hill House is scary on a slightly different level but still creepy enough to haunt readers of books similar to Flowers in the Attic.

The Secret of Ventriloquism, by Jon Padgett

Exploring themes reminiscent of the aforementioned Shirley Jackson, The Secret of Ventriloquism by Jon Padgett takes a ghastly and glorious delve into the mysteries of human suffering and the agony of existence.

An incredibly creative narrative formed of interlinking stories with a mysterious presence speaking through all the characters, there’s the story of a young boy, tortured and bullied at school who decides to enact revenge, the ventriloquist obsessed with mirrors, a dummy who reveals its anatomy in 20 simple steps among others.

Padgett himself has experience with ventriloquism and in his debut novel he expertly breaks down the boundaries between puppet and puppeteer with a philosophy questioning our free will and the power behind our actions.

It can be difficult to adequately scare the reader and not lose sight of the plot but Padgett escapes these pitfalls creating a creepy novel that fans of books like Flowers in the Attic will enjoy. Dummies and puppets have always scared me and reading The Secret to Ventriloquism has certainly expelled any hopes of outgrowing this fear!

We couldn’t really compile a list of creepy and scary books without including one by the master of horror himself, Stephen King. I have chosen Misery, a story of obsession, imprisonment and abuse veiled by protection – a great read for anyone looking for a novel similar to Flowers in the Attic.

This time the captor is a woman, Annie Wilkes, a former nurse and avid reader of author Paul Sheldon’s novels.

When Paul has a serious accident, who is on hand to tend to his broken body?

Her refusal to take him to a hospital and the constant supply of painkillers causes alarm bells to ring as Paul quickly realises that Annie is unstable and holding him captive. Her plan, to force Paul to write her a new story, with such chilling motives, surely this isn’t the first time her obsessive and violent tendencies have been used on others?

King expertly explores the relationship between celebrities and their fans and draws on his own experience as a writer to create the incredibly unsettling Misery.

What haunts me most about books like Flowers in the Attic is the relatable vulnerabilities of the characters and the easy inevitabilities that drive them to their fates. The events in these books are what hook us in but they could actually all easily occur and that is why ghosts and the supernatural aren’t always needed to truly creep you out.

Are you searching for more books like Flowers in the Attic? Have any recommendations that didn’t make the list? Let us know in the comments! 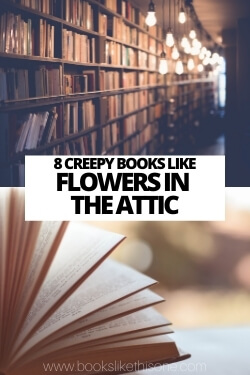