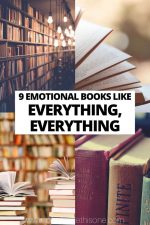 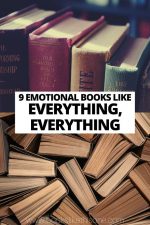 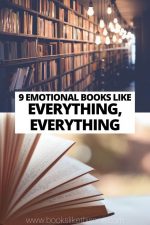 Published in 2015, Everything, Everything is an amazing story about a teenage girl with an immunodeficiency disease that was later made into a film. This book is not just about first love in desperate circumstances; it’s about how your past can affect your future and how far someone is willing to go for the ones they love and it has many readers searching for more books like Everything, Everything.

The story: Teenager, Maddy Whittier, has SCID (Severe combined immunodeficiency) which means if she leaves her small world; made up of her mother, her books and her nurse – she could die. Her mother is incredibly protective but Maddy knows she has her reasons.

She is fairly content with her lot until Olly moves in next door. They begin communicating through the safety of her window until Maddy decides she wants more than her small world can offer.

This is a touching story which follows Maddy’s journey into love and a discovery that will shake her to her very core.

If you’re looking for books like Everything, Everything, peruse this list of candidates for your next read.

This book is similar to Everything, Everything in that the story is about love through adversity. The title was apparently inspired by Shakespeare’s play, Julius Caesar Act 1 Scene 2.

Sixteen-year-old Hazel Lancaster has terminal cancer of the thyroid and is encouraged to join a support group where she meets Augustus Waters and his friend, Isaac. Gus and Hazel form an attachment despite their first meeting being tense.

When Gus agrees to read her favourite book, it leads to correspondence with the author and a trip for them both to Amsterdam.

Although there can be no happily ever after for their relationship, Green manages to tell their story with not only heart-warming emotion but plenty of humour too.

So, if you liked Everything, Everything, then The Fault in our Stars will be a good choice. NOTE: Keep your tissue box handy!

Another novel like Everything, Everything is Five Feet Apart. Like the previous two books, this novel was also made into a film in 2019. Weepy stories are obviously popular, although this one is inspired by a real couple.

The two main characters (Stella and Will) each suffer from cystic fibrosis; because of this, they have to keep at least five feet apart to avoid cross-contaminating each other, which could result in death for either of them.

He’s a rule breaker and she wants to do things by the book. Eventually, she agrees to go on a date. During their date, Stella is notified of an available lung transplant but she doesn’t tell Will and then something terrible happens.

You’ll need to read it to find out what, but whether happy or sad tears, refill your tissue box.

Opposite of Always, by Justin A Reynolds

If you love the fraught romance in Everything, Everything but enjoyed the mystery of time travel in The Time Traveler’s Wife, then this novel by Justin A Reynolds should be on your wish list.

Our young lovers, Jack and Kate, meet at a party and feel an instant connection, although Kate is hiding something from Jack.

There relationship continues to grow until—{Spoiler Alert!!}— Kate dies. She failed to tell Jack about her illness. He falls and hits his head setting off a time loop where he tries to go back and save her, but time travel has consequences.

This story, similar to Everything, Everything, also poses the question: what are you willing to do to save the ones you love?

If ‘fantasy’ and ‘engaging love story’ are in your search engine at the moment, then try Opposite of Always.

A Quiet Kind of Thunder, by Sara Barnard

Falling in love when dealing with teenage angst and social awkwardness is complicated enough but throw in the fact that neither one of you speaks, and you have A Quiet Kind of Thunder.

Rhys is deaf and Steffi is a selective mute. She knows a little sign language so she is partnered with Rhys at school. This extraordinary partnership slowly builds into love.

Steffi works part-time at an animal shelter and has an ambition to become a veterinarian. Will love provide her with the courage to be able to speak to strangers and eventually be able to attend college and fulfil her dream?

As we all know – Love can conquer all, and in this book like Everything, Everything you will be crossing your fingers and rooting for Rhys and Steffi to be triumphant.

The Rest of the Story, by Sarah Dessen

Emma Saylor’s mother died when she was young but she does remember her mother telling her stories about the lake where they lived. In this book like Everything, Everything, Emma Saylor finds a different side to herself when she spends a summer with her late mother’s family.

She reconnects with her best friend from her childhood, Roo, who helps her uncover events in her family history. Their friendship develops into something more and Emma’s three-week visit to the lake is suddenly much too short.

There are things in our family history we discover over the years; small things which may surprise us and some we would rather forget. The Rest of the Story explores the relationships within the family dynamic.

This is a touching story of first love and discovery; a good holiday read to pop in your beach bag.

In this novel like Everything, Everything, Audrey has to overcome her past experiences and the separation of her parents to find love. The plot follows the arc of a romance novel to begin with, but Bourne doesn’t follow all the rules. No spoilers here!

When her parents split, her mother fell apart and this experience has deeply affected Audrey, who works at a local indie cinema. She has seen all the romance films with their cliché moments and happy endings but she has also seen how real love can be.

While working in the cinema, she meets new employee cliché ‘bad boy’ Harry. The book follows their journey via the conventions of a romance novel as seen by those wearing rose-coloured glasses but the results aren’t always as you’d expect.

If you like a dose of realism with your romance, then It Only Happens in the Movies, is one for you.

The Geography of You and Me, by Jennifer E Smith

When Owen and Lucy meet in an elevator during a blackout, they feel an immediate connection — one that refuses to sever no matter what the circumstances.

The story, which is told from both perspectives, begins in an apartment building in New York. A citywide blackout is the instigation for a magical night that bonds our main characters in a way they won’t forget.

Unfortunately, life takes Owen and Lucy in separate directions following their own stories from Edinburgh to Prague, but they continue to reminisce about their meeting and keep in touch via postcards and the occasional email.

This book similar to Everything, Everything asks the question: Can a relationship survive distance?  The Geography of You and Me gives us all hope that the answer is yes!

If I Stay, by Gayle Forman

Told over a period of 24 hours, this book like Everything, Everything tells the story of teenager, Mia, who is involved in a car crash with her family. Her younger brother is critical and both parents are dead – Mia is somewhere in between.

Her out-of-body experience allows her to see everything that’s going on, including herself on the operating table, but she can’t feel her hand being held by her boyfriend, Adam.

If I Stay is a moving story about young love, family and death, told through a series of flashbacks where Mia takes an objective look at her life. She has to face up to what happened before the crash and how she will get through – if she decides to go back.

If you like to live in the in between switching from smiling to sobbing, then this novel like Everything, Everything should be on your bookshelf or in your e-reader.

Every Day, by David Levithan

Winner of the UKLA award for YA fiction, this book similar to Everything, Everything is about first love but our main character ‘A’ has an unusual disability: he’s not male or female he’s more of an entity, and every day he wakes up in a different body.

He follows the rules of not interfering or getting too attached to people in his ‘hosts’ lives, but when he becomes Justin and meets Justin’s girlfriend, Rhiannon, all rules go out the window.  A wants to be with Rhiannon but realising he has no real identity of his own, he begins to seek ways of being with her even though this affects the subsequent bodies he inhabits.

If you read Every Day and want to know how it felt for Rhiannon, then you could follow this with the second in the Every Day series: Another Day.  There is also a third book called Someday which explores the question of what makes us human?

It’s important when writing about any kind of disability, physical or otherwise, to not focus the narrative on the issues but let the story emerge from the adversity. In these books like Everything, Everything the characters may be struggling to overcome difficulties but the stories here are poignant, humorous and skilfully told. And as we all know –Love conquers all!

Are you looking for more books like Everything, Everything? Do you have any recommendations that didn’t make the list? Let us know in the comments! 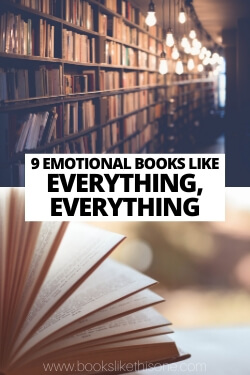