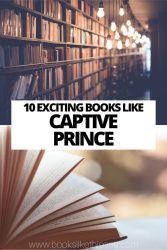 Finding exciting books like Captive Prince can seem a bit tricky considering the big shoes it has to fill.

In the first book of the trilogy, Damen is a prince of Akielos but his life is upended when his brother seizes power and takes the throne for himself. Stripped of his title, his identity and his right to the throne, Damen is shipped off to an enemy country to serve as a pleasure slave to the nation’s own prince.

Prince Laurent of Vere is downright brutal, manipulative and clever, all helpful traits when navigating the political intrigue of his country. A strange but strong bond develops between Damen and Laurent but he can never let Laurent know who he truly is or he may risk his life and their relationship, testing their love for one another.

But when Damen finds himself in a play for the throne, he must help Laurent fight to survive as well as save his own country.

Captive Prince, the first book in the Captive Prince trilogy, is a global phenomenon but if you have already read them, you may be looking for something similar. Well, look no further as I have put together a list of books to satisfy your cravings.

The Foxhole Court, by Nora Sakavik

Perfect for lovers of books similar to Captive Prince, why not pick up The Foxhole Court for your next read? With its slow-burn romance, found family and tons of action, it has something for everybody.

Neil Josten has been on the run from his father, the renowned crime lord and murderer the Butcher, for years. Living under many roofs and many names, he has never stayed in the same place for long.

But when he becomes the newest member of Palmetto State’s high profile Exy team, he’s putting everything on the line, especially when one of his teammates turns out to be someone he knew from his old life.

Maybe it’s time to stop running and allow himself to face his past so he can step forward into his future.

The first book in the Green Creek series, Wolfsong follows Ox whose father abandoned him as a child and left him with little self-worth and confidence in himself.

When he is sixteen, he meets another boy named Joe who moved just down the road and charms Ox and worms his way into his heart.

The boys form a bond stronger than that of friendship which grows more intense and overwhelming as they grow into young men – that of alpha, beta and omega.

When Ox is twenty-three, murder visits the small town in the woods they live in and Joe leaves, looking for revenge.

When he returns three years later, there’s no denying the connection the pair hold between one another. This paranormal romance is a great alternative book to the Captive Prince if you’re looking for something to add to your to-be read list.

A queer, enemies-to-lovers fantasy romance novel, Carry On is perfect for fans of Captive Prince.

Simon Snow is considered the ‘Chosen One’ but he is the worst ‘Chosen One’ around. Studying at Watford School of Magicks, his life is falling apart piece by piece.

Heartbroken after his girlfriend breaks up with him, he finds his mentor is also avoiding him and there is a monster that looks exactly like Simon (but isn’t Simon) that is eating all the magic. To make matters worse, his vampire roommate (and nemesis), Baz, isn’t around.

With life being so unusual, Simon would do anything to have Baz taunt him just one more time.

Another queer romance but this time it’s based in Ancient Greece. The Song of Achilles retells the classic story of Achilles told from the perspective of his best friend and lover, Patroclus.

After being exiled by his father to live in the court of Peleus after accidentally killing a noble boy, young Greek Prince Patroclus finds himself forming a strong friendship with the demi-god Achilles, his host’s son.

As their bond grows stronger, the pair fall madly in love and Patroclus becomes sworn to Achilles as his brother-in-arms. We follow the two through their lives and into war.

For readers looking for something sadder to weep to, this romantic tragedy is a great choice!

Tarnished are the Stars, by Rosiee Thor

A beautiful and action-packed fantasy novel, Tarnished are the Stars is an entertaining story set in a world that lives under the tyrannical laws of the Commissioner.

Anna, also known as the Technician, helps provide illegal medical technology for the sick and dying.

Every day he fights for his father’s respect so he chases after the Technician but when he finds her, he realizes that maybe it is his father who isn’t as good as he says he is.

Then there is Eliah, the Queen’s spy and assassin, who is after the Commissioner too. When the three collide, they realize they must work together despite their differences (and growing feelings) to save their world as they know it before the Commissioner gets them all first.

A similar book to Captive Prince, this dystopian action novel is the perfect queer romance set in post-apocalyptic America.

Wranglestone is set in a community that has survived the living dead pandemic by living in a national park, an island surrounded by water that keeps the monsters at bay. However, winter is fast approaching and when the water freezes over, the dead will arrive at their shores.

We meet Peter, a soft boy who isn’t prepared for the coming winter and when he lets a stranger ashore, he puts everyone in danger. As punishment, Peter is enlisted to help rancher Cooper to keep away the dead before winter arrives.

But throughout their perilous journey, love blooms between the pair and as it does, Wranglestone’s dark past is revealed.

When looking for a book like Captive Prince, why not try the author’s own other works? Fence is not only written by Pacat, the author of Captive Prince, but it is a graphic novel series for fans of other forms of writing.

The novel follows Nicholas, the illegitimate son of a retired fencing champion, who hopes to train and compete for himself. After he gets into Kings Row private school, his life is full of friendships, romance and enemies.

The boys at the school realize there is much more to fencing than what they first realized.

In Cemetery Boys, Yadriel’s family have problems accepting his gender and to prove himself a real brujo, he attempts to perform a ritual himself to summon the ghost of his murdered cousin and set him free.

However, the ghost he actually summons is Julian Diaz, the school’s bad boy, and Julian isn’t exactly happy about ‘moving on’ and now Yadriel is stuck with him.

He agrees to help Julian find out what happened to him so they can both get what they want and Julian can move on in peace.

However, there’s a problem: the more time Yadriel spends with Julian, the less he wants him to leave. A heartwarming and hilarious romance novel that people who liked Captive Prince would love.

The First to Die at the End, by Adam Silvera

A tragic romance, The First to Die at the End is a wonderful story of life and death and love which is a perfect read for fans of books like Captive Prince.

It is the eve before Death-Cast, something that allows people to know their death date, goes live and it’s all people can talk about: can it truly predict people’s deaths?

When Orion and Valentino meet in Times Square, it is obvious there is a connection between the pair.

Orion has a serious heart condition that means he could die at any moment whereas Valentino only signed up for Death-Cast after his twin nearly died in a car accident.

But when Death-Cast goes live and one of the boys gets a phone call, they decide to spend the day together despite how heartbreaking the end of it may or may not be.

Another graphic novel about navigating life as a young adult, this heartwarming queer novel is a much more lighthearted alternative for those wanting a read similar to Captive Prince.

Check, Please! follows Eric Bittle who is an ex-junior figure skating champion turned hockey player who is learning to cope with starting college, moving into contact sport and his friendships and relationships in his life.

In particular, his feelings toward his moody hockey captain, Jack. Much like Captive Prince, this novel follows an unlikely friendship that moves into a romance.

Books like Captive Prince are full of the best romance along with being action-packed thrillers. Try one of the books above for your next read.

Are you searching for more books similar to Captive Prince? Have any recommendations that didn’t make the list? Let us know in the comments! 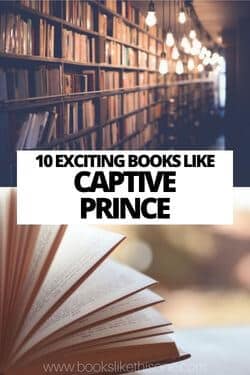