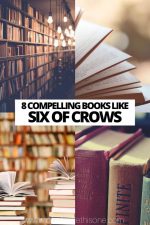 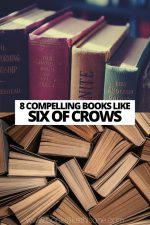 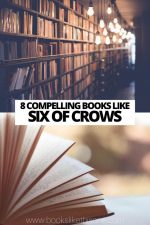 Anyone who’s at all interested in YA and fantasy might have come across Bardugo’s immensely popular Six of Crows series. The tale of Kaz Brekker, leader of the Dregs, a prominent gang in the city of Ketterdam, has had many fans of Bardugo’s work talking since 2015.

On the surface, it’s a story about a daring heist (always fun!), but scratch beneath and you find a motley collection of characters you can’t help but be swept away by. However, if you’ve read Six of Crows one too many times and are looking for something similar to feast on, the books below might sate your appetite.

Books like Six of Crows are only as good as the characters that populate them. In Descendants, we are treated to another collection of strikingly flawed characters.

Mal, Evie, Jay and Carlos happen to be the children of the worst villains of all time. Trapped on the Isle of the Lost for most of their lives, they’re finally offered the chance to leave and attend a prep school where all the ‘good’ kids go. What can possibly go wrong?

Now, usually, I don’t like reviewing novelisations, but the Descendants surprised me. Having never seen the Disney movie, I went in blind and finished pleasantly amused. The idea of having the children of some of the worst fairy-tale villains in history go to school in order to steal the Fairy Godmother’s wand is silly enough to hold the attention.

The answer of whether or not these kids will be as bad as their parents are will shock no one, but as always, it’s the journey that matters.

So many books like Six of Crows delight in playing with your perceptions: what you think you know is not necessarily what is.

Brainwalker is a brain-bender, mostly taking place in the head of a 14-year-old boy’s physicist father… literally. Bernard is a typical troubled 14-year-old. He gets in trouble often and is a headache for his father.

When Bernard wanders into his Dad’s particle accelerator at work, he becomes a very real headache. Transported through a wormhole and straight into his Dad’s head, Bernard finds himself in the middle of a war between his father’s creative side and the tyrannical left half of the brain.

Books don’t come any odder than this, yet the characters are what make it work. The Intuit and Reezon people he meets are fun, devious, nasty and lovely. Some of the names are a bit on the nose, but if you like Six of Crows, you will enjoy this.

The Rest of Us Just Live Here, by Patrick Ness

Books like Six of Crows delight in playing around with interesting questions and focusing on background characters. The Rest of Us Just Live Here plays with a great question: what if you weren’t the chosen one?

Patrick Ness is clearly a fan of Buffy the Vampire Slayer, but instead of focusing on the ‘superhero’, he focuses on the people behind and around the hero. This book is about the kids who aren’t in any ‘scooby’ gang. Mikey is the protagonist we follow and all he wants to do is graduate and ask out the girl of his dreams before the school blows up (again).

All the supernatural stuff happens around him, and watching the soul-eating zombies, ghosts and blue lights through his eyes is a joy. Imagine being one of the kids in the background of Sunnydale High and you’ll have a rough idea of what to expect here. Funny, poignant and with a good heart, The Rest of Us Just Live Here is well worth a read.

A Darker Shade of Magic (Shades of Magic 1), by V.E. Schwab

Having already read Schwab’s excellent Vicious, I was pleased to find another book like Six of Crows that is a real page-turner. Parallel world stories are always interesting to read, and A Darker Shade of Magic is engaging. We follow Kell, one of the last magicians with a rare ability to travel between parallel London’s; red, grey, white and in the past, black.

Like Kaz, Kell is a rogue. He is a smuggler and takes money from people desperate to catch a glance at another world. Of course one of his exchanges goes wrong and Kell finds himself on the run and trying to prevent treacherous magic from destroying all the worlds.

More traditional fantasy than Vicious (which was ostensibly about superheroes), A Darker Shade of Magic takes a good plot and like Six of Crows brings it to bright life with great characterisation. Put it on your reading list.

The Raven Boys (The Raven Cycle 1), by Maggie Stiefvater

Another similar title to Six of Crows, The Raven Boys has a cast of characters that you can’t help but want to know more about. The story revolves around Blue Sargent, the daughter of a local clairvoyant. When Blue starts seeing the ‘spirit’ of Gansey, a boy she’s yet to meet, her mother tells her it’s because he’s either her true love or Blue will end up killing him.

When she meets Gansey in real life, Blue starts to wonder if her mother might be right. Adam, Ronan and Noah are all Gansey’s friends and they all come from the local private school, which Blue knows spells trouble. Yet she can’t help but be drawn to this weird quartet.

The Raven Boys has drawn some criticism for using the trope of ‘loner girl meets rich privileged boys and falls in love’, but the story holds up fairly solidly. This is entirely down to the characters, as without them, I’m not sure the narrative would work as well.

Imagine accidentally raising your brother from the dead? That is the hook of Chupeco’s story, and it hooks the attention well. Many books like Six of Crows play with the dead (so to speak), but The Bone Witch does it with a love for magic systems and rules that make sense in the world created.

Tea is a likeable enough protagonist to follow through her journey from accidental necromancer to accomplished Bone Witch. Some of the descriptions tend to slow down the pacing, especially in the second half of the book, but generally, this is a good enjoyable read about a girl finding her way as a witch.

Bear with me; because Oliver Twist has more in common with books similar to Six of Crows than you think. Bardugo herself cited this classic tale as a companion book to read alongside her own series. Why? Well, she compares Kaz to the first modern rogue in literature; the Artful Dodger.

Like Kaz, the Artful Dodger is a trickster, pickpocketing and charming his way around other people. There is also plenty of resonance with the rest of the cast of Oliver Twist.

Oliver himself has no family, belongs to no one and is searching for a family of his own. He comes from a tragic background, just like Kaz. Kaz is arguably an amalgam of Oliver, the Artful Dodger, and Fagin.

He even has a violent and ruthless streak like Bill Sikes. If you’re looking for a book like Six of Crows with memorable characters that inspired Kaz and his gang, you could do worse than start with Oliver Twist.

The reason books like Six of Crows draw in so many readers is because they hold the door open to other worlds, and then populate those worlds with personalities we can identify from our lives.

Inspired loosely by the Roman empire, in An Ember in the Ashes the Martial Empire rules a hostile world where anyone who doesn’t submit and pledge allegiance is executed. Laia is our lead protagonist along with Elias. Two people from opposite ends of life who meet by chance at the Empire’s military academy.

Laia is there to gain vengeance for her brother’s death by spying for a growing band of rebels. Elias is there to train as a soldier but secretly longs to be free. You can guess where the story might go next, but this tale feels epic and that works really well.

Any fan of Six of Crows is a fan of magic, a certain degree of mayhem and excellent characterisation. The books above are only a few of the hundreds of similar titles, each boasting its own style of magical realism. Of course, there are many more out there.

Have we failed to conjure a book that’s on your own list? Let us know in the comments below. 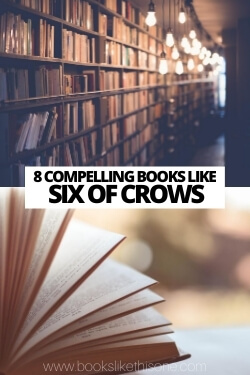