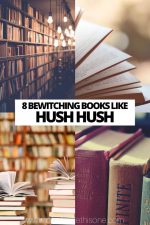 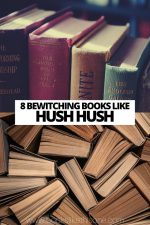 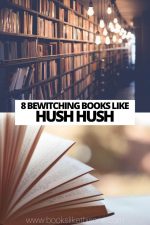 Are you searching for more books like Hush, Hush?

Hush, Hush is a book that has been compared favourably and unfavourably to Twilight. The story of teenager, Nora Grey, as she gradually becomes attracted to the bad-boy fallen angel, Patch, holds many similarities with Edward and Bella’s melodramatic trysts.

In a way, this comparison has meant that Hush, Hush divides opinion with some readers loving it, and others labelling it as ‘appalling’. If you’re reading this, you’ve likely already read the book and enjoyed it enough to look for similar titles.

So below are a few books like Hush, Hush that we think will appeal.

Having one character obsessed with another appears to be common in books like Hush, Hush.

In Beautiful Disaster, readers are introduced to the train-wreck that is Travis Maddox, a lean, muscly and tattooed bad-boy who unapologetically has one night stands with every girl in college he can until he meets Abby Abernathy.

Abby is a young 1st year who has resolved to start afresh as a ‘good girl’. Whilst this book was not really my cup of tea (yes, I’m English and yes, I enjoy tea) it is hard to deny the appeal it holds for a huge group of readers who enjoyed Hush, Hush and Twilight.

There are many sections of this story that have sparked huge debate across the young adult readership; is Travis a controlling stalker, or is he merely a damaged young man that needs psychological therapy? Both could be true from my reading, but if you enjoyed Hush, Hush than Beautiful Disaster might scratch that reading itch.

Books like Hush, Hush like to play with the supernatural and Angelfall is a perfect example to read.

Set on an Earth that was devastated by the apocalypse six weeks ago, we follow Penryn, a 17-year-old girl who’s trying to find and rescue her little sister after she was kidnapped by warrior angels.

Penryn will do anything to get her sister back including making a deal with Raffe, a dangerous enemy angel she finds broken, wingless and alone in the ravaged streets. Angelfall is an engrossing read.

The characters are believable, the story holds the attention and most importantly, the lead protagonist isn’t pining after the ‘bad-boy’ anti-hero all the time.

Whilst an angel-driven after-the-apocalypse is nothing new (see Aliette de Bodard’s The House of Shattered Wings and TV’s Supernatural for earlier examples), Angelfall gives us characters to root for.

Stories about a war between angels and demons will always pique my interest, and books like Hush, Hush play around with this trope a lot… some better than others.

Daughter of Smoke & Bone begins with more mystery than other books on this list. We’re slowly introduced to the supernatural world through Karou, a blue-haired orphaned teenager trying to learn more about her past and why her hair actually grows blue.

Large sections of the book take place in Marrakesh and Paris and the richly imagined detail of both is clear to see on every page.

Very quickly we’re introduced to Karou as someone ‘supernatural’ as she slips between magic portals to run errands in each city. Eventually, an angel named Akiva enters the story, and Karou learns more about herself than she wants to know.

Daughter of Smoke & Bone is a mix of religious mysticism, fantasy and tween romance. Perfect for fans of Hush, Hush.

Doomed romance and forbidden love; two tropes that are sprinkled liberally throughout books like Hush, Hush. Fallen is no exception.

Luce Price is desperate to find out more about the mysterious and aloof Daniel Grigori from the moment she sees him at her boarding school. Fans of Hush, Hush or Twilight will probably be able to figure out the rest of the story from this point on, but if you enjoy those books it really doesn’t matter.

Of course, Daniel doesn’t want to have anything to do with Luce which of course only makes her more determined to find out what he’s hiding. The truth will surprise no one, but Fallen is a YA novel that isn’t trying to surprise you.

Fallen is about the fantasy of forbidden love, reincarnation, angels and romance and in those respects, it succeeds admirably.

Everything feels like it’s the end of the world in books like Hush, Hush. In Beautiful Creatures, both Ethan and Lena make you feel like their world is literally going to end on every page.

Set in the US southern town of Gatlin, Georgia (I think it’s Georgia – there is a town called Gatlin in Georgia so I assume this is the same Gatlin) the story follows Ethan as he becomes drawn to new-girl Lena when she arrives in town.

To be fair, Gatlin is described as the most boring town ever, so you can’t really blame Ethan. It doesn’t take a genius to work out that Lena is not your average girl. Magic is everywhere, and for Ethan, things are about to get complicated.

Supernatural happenings aside, I actually thought this was a rather sweet YA romance novel. Ethan falling head-over-heels for the new girl will be familiar to anyone who’s ever had a crush on someone in school.

And when the connection between him and Lena becomes clear, you are reminded of just how much importance we all used to place on friendships and love when we were Ethan’s age.

Away from Twilight and other books like Hush, Hush, you can find this well-told gem from John Green. Whilst it has the doomed romance element familiar to fans of Hush, Hush, it also has a firm grasp on the reality of teenage love.

It’s hard to know whether you’re going to like a story whose teenaged protagonist tells you she’s dying from cancer on the very first page. Yet, from the moment I picked this up I found it hard to put it down.

Hazel and Gus are believable characters whose tragedy makes every other paranormal YA romance seem trite by comparison. Anyone who’s ever been affected by cancer will immediately relate to the gross injustice of the horrible disease affecting Hazel and Gus. And anyone who remembers what it’s like to fall in love for the first time will laugh and cry along with both Hazel and Gus.

The story is eloquently tragic without being too saccharine. Hazel, Gus and their friends could be any set of teenagers you know; angry and sad, yet hopeful and still innocent in many respects. The Fault in Our Stars is my top pick on this list. If you want to read anything similar to Hush, Hush; start here.

Already know and love this moving novel? Check out our list of more books like The Fault in Our Stars!

Dramatic flourishes are intertwined with the supernatural in books like Hush, Hush. Unearthly appears no different at first.

The story follows Clara Gardner, a young teen who’s just discovered she’s part angel and therefore stronger, smarter and faster than humans. Her visions lead her to a new school and the boy of her dreams before she runs into Tucker, another seemingly ‘dark’ bad-boy who appeals to Clara’s wicked side.

Before you start rolling your eyes, be aware that whilst Unearthly is a teen romance, its characters are better crafted and more rounded than others. Clara, Christian and Tucker are not just two-dimensional mopey cardboard cut-outs desperate to die for one another in despair.

In fact, their developing relationships are more believable in the sense that they talk to each other a lot and aren’t just attracted to each other because the plot says so.

With a wealth of YA angel novels flying around out there (no pun intended), Unearthly is well worth checking out.

Whilst werewolf stories have been around for centuries, adding in the tragedy of doomed romance has given these supernatural creatures a bit more life on the page.

In Shiver, we are introduced to Grace, a young girl who’s watched the wolves living in the woods behind her house since she was little. There is one wolf with yellow eyes that she can’t seem to help but feel drawn to.

Of course, this is no ordinary wolf.

Sam is a wolf for most of the year, but in summer he gets to spend a few precious months as a human. You can probably guess the rest of the story from here, but if you liked Hush, Hush this will serve you well.

Whilst I am becoming increasingly bemused by the number of young adult novels whose lead protagonist can’t help but be drawn to the ‘bad-boy’ supernatural character, Hush, Hush and similar titles do appeal to a substantial enough audience.

There’s a reason Romeo & Juliet is still one of the most widely performed plays of all time. Some of the books on this list I enjoyed more than others, but as always, we’d be interested to hear what you think.

Are you looking for more books similar to Hush, Hush? Do you agree with our choices? Or do you think we’ve missed some better angelic tales? Let us know in the comments! 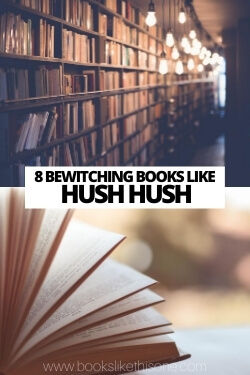