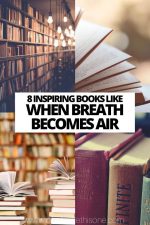 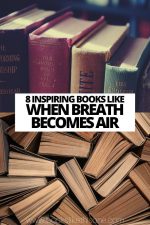 Searching for more books like When Breath Becomes Air?

Paul Kalanithi was a dedicated surgeon; he devoted his life to medicine and in his final year of residency, when he began to experience frightening symptoms, he pushed them to the wayside, determined to continue on with his studies. Only a few weeks later, it became clear he couldn’t keep practising medicine, and he was diagnosed with Stage IV lung cancer.

When Breath Becomes Air is Kalanithi’s memoir of those final few months while he was in treatment; it tells the story of how a doctor must suddenly become the patient and the difficulties that come with that. It is a beautiful piece of non-fiction, if not devastating, and the following memoirs all teach the reader something about the hardships of life, and the necessity to keep going anyway.

Like When Breath Becomes Air, the writers of these stories have been through turmoil and grief, but in learning about their struggles, there lies something for the reader, if not inspiration, then at least the idea that we are not alone in our fears.

This is Going to Hurt, by Adam Kay

This is Going to Hurt is a collection of diary entries from a junior doctor, documenting his experiences in his first six years in medicine. Kay is a witty and sharp writer – this nonfiction book is mostly hilarious, but with some very difficult moments, and deals with a variety of issues such as stillbirth, miscarriage and suicide.

This book also portrays how deeply mistreated junior doctors are, and how much this mistreatment leads to a lessened quality of life for those who do their best to improve that for other people.

Like When Breath Becomes Air, this book is largely set in a hospital, and Kay and Kalanithi have similar narratives, although Kay’s book is much more light-hearted.

After reading both, you will have a newfound respect for front-line workers, perhaps even more so in light of the current climate, and both works are as fascinating as they are upsetting.

Tuesdays with Morrie, by Mitch Albom

Tuesdays with Morrie is very similar to books like as When Breath Becomes Air. They both centre in on the declining health of an individual and the wisdom they hope to impart before their deaths. In this case, the story is told by Albom, who is recounting his last few months with former professor Morrie.

Morrie has been diagnosed with ALS, also known as motor neuron disease, and knowing he has very little time left, he hopes to provide Albom with some well-needed life lessons. The pair share a bond, which only makes Morrie’s condition even more painful, but the time they spend together proves invaluable for them both.

It seems that some lessons in life can only be learned when someone is dying, and both Kalanithi and Albom write this beautifully, and in such a way that is accessible to the common reader. A must-read if you’re looking for books similar to When Breath Becomes Air.

When the war ends, and she and the other inmates are freed, Eger continues to be haunted by the trauma she feels having lived through the holocaust.

As she tries to move on with her life, getting married and starting a family, it becomes abundantly clear that pushing the dreadful memories of the concentration camp to the back of her mind won’t alleviate the pain she feels.

As in memoirs like When Breath Becomes Air, there are tender moments in this book, moments that are emotionally charged and difficult to read, as well as difficult to imagine the author having to experience. Ultimately, just like in Kalanithi’s memoir, the story is an uplifting one and teaches the reader how best to keep on living in the face of tragedy.

Notes to Self, by Emilie Pine

Notes to Self is an essay collection, written by Professor Emilie Pine on various topics such as alcoholism, infertility and sexual assault. She writes with such clarity and honesty, speaking truths that are both uncomfortable but important to be spoken.

Pine also examines her own memories and acknowledges that at times they may not be exactly right, but how a memory appears in one’s self is as important as what actually happened. Just as in memoirs such as When Breath Becomes Air, there’s a lot of heavy material to be digested, but the narrative allows that information to be understood easily.

This is a memoir that can touch the lives of anyone, but predominantly women, as Pine details some of the more excruciating parts of being female, and how the gender continues to battle on each day regardless.

As in Kalanithi’s book, there is a lot to be learned from these essays, and even more to deeply reflect on. So, if you’re looking for more books like When Breath Becomes Air, consider picking up a copy of Notes to Self.

In Constellations, Sinéad Gleeson talks about loss and pain in her memoir, much like what is discussed in When Breath Becomes Air.

Like Kalanithi, Gleeson is no stranger to being poked and prodded – as a young girl barely beginning adolescence, she is diagnosed with monoarticular arthritis, a debilitating disease that affects much of her teenage years, and has her considering the function of the body as a whole in her later life.

Like When Breath Becomes Air, this memoir is very much about the body’s failings, and what that can mean for the owner of such a body, and the people around them also.

Reading about some of Gleeson’s struggles makes the reader wonder how she could bear to continue on sometimes, but her resilience is astounding and inspiring, just as Kalanithi’s was when he wrote his memoir, knowing that he was going to die.

Twas the Nightshift before Christmas, by Adam Kay

If the medical side of When Breath Becomes Air is what fascinated you, then Kay’s second non-fiction novel, Twas the Nightshift before Christmas, is a must-read. Following on from This is Going to Hurt, Kay writes about the Christmases he spent in the hospital and the various shifts he had.

This memoir is much of what he deemed too inappropriate to put into his first book, but given its giant success, Kay had to shed light on what it’s like to work in the gynaecology ward on Christmas Day.

Just as in books like When Breath Becomes Air, there is a sort of dark humour that can only be found in medical tales, and the reader is incited to take in more, even as what they read can at times turn their stomachs.

But just as in Kay’s first book, and When Breath Becomes Air, there are a few heartfelt moments amongst the sarcasm, reminding you of the beauty of birth (even when a woman is screaming that it feels like they’re being ripped apart). A medical memoir that deserves to be read.

In Twelve Thousand Days, Éilís Ní Dhuibhne tells the story of her life from the time she met her late husband Bo at University.

Their love story is an unusual one – Bo sits at nearly thirty years older than Ni Dhuibhne, and yet from this memoir, it sounds like the pair could not have been more perfect for one another.

They go through initial difficulties with their relationship and yet Ni Dhuibhne never talks about giving up, or having regrets, instead relishing the twelve thousand days they got to the spend with one another, building a life and a family when such an idea seemed originally impossible.

Like When Breath Becomes Air, this memoir does not shy away from the difficulties of caring for someone who is not well. As Bo gets older he is unable to do as much and after a series of unfortunate missed signals, he passes away in a hospital due to negligence.

As in Kalanithi’s memoir, there is a sense of how unfair the trials we experience can be, how these so often surround our health and yet memoirs such as these remind the reader that life is precious as well.

The title Educated alludes to more than just the education that Westover fought to receive, but also the education the reader gets from taking up this book. Westover is born to a family of survivalists, only first coming into a classroom at the end of teenage years.

Her father doesn’t believe in education, at least not the kind you receive in school; he is sure that the apocalypse is upon them and the time spent in a classroom will ultimately be a waste of time.

Westover suffers from the constant brutality of her brother, and the estrangement of her family as she begins to grow out of the ideologies that have been thrust upon her since birth.

This is a wonderfully written memoir; it encapsulates Westover’s story perfectly. Just as in other books like When Breath Becomes Air, this story reads authentic and true to the writer, a story that can only be told by the one who has experienced it first-hand.

Have you already read this powerful memoir? Have a look at our list of books like Educated!

The best part of reading memoirs is learning about a life or an experience that is so different from the one you have yourself. When Breath Becomes Air is heart-breaking but it teaches the reader a lot about living while you still can, and not leaving anything to chance. The other memoirs on this list provide something similar for the reader; they are inspiring, emotional, brave and insightful.

Are you looking for more books like When Breath Becomes Air? Have any recommendations that didn’t make the list? Let us know in the comments! 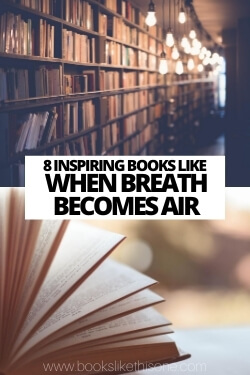