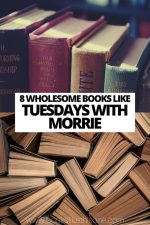 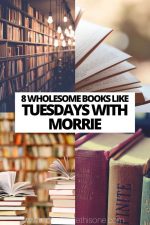 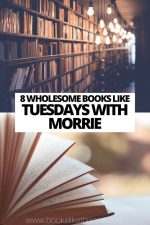 Looking for more wholesome and poignant books like Tuesdays with Morrie?

Tuesdays with Morrie is, in some ways, Mitch Albom’s memoir, documenting the fourteen visits he made to his former sociology professor before he died in 1995. The book became something of a cult favourite, for the important lessons Morrie teaches Albom, and in turn, any of the book’s readers.

Although it is an incredibly sad story, as you follow Morrie’s battle with ACL, it is also inspiring and provides its reader with insights into love, life and death. The following books all provide similar wisdom – some of them are memoirs also, whilst others are pieces of fiction that carry a similar ethos to novels like Tuesdays with Morrie.

The Five People You Meet in Heaven, by Mitch Albom

This novel is fiction but is written by the same author of Tuesdays with Morrie, it reads very similar at times.

Eighty-three-year old Eddie works in a theme park until one day he is killed trying to save a young girl and ends up in Heaven. Before he can fully pass over, Eddie must encounter five different people he knew when he was alive, each of whom had a significant impact on his life in one way or another.

The novel is reminiscent of Tuesdays with Morrie due to how it’s structured into episodic chapters, where each chapter introduces a new lesson to be learned.

Like Tuesdays with Morrie, The Five People You Meet in Heaven evokes a series of rattling emotions and though it is often devastating, the overall tone of the novel is uplifting, as Eddie learns who really mattered to him, and who he really mattered to.

Twelve Thousand Days: A Memoir of Loss and Love, by Éilís Ní Dhuibhne

In this memoir, Professor Ní Dhuibhne tells her story from the moment she met her husband Bo, and the life they went on to lead together.

Though Ní Dhuibhne and her husband had a significant age gap, this becomes one of the least interesting parts of their relationship – they jump through a series of obstacles and difficulties, their goal on being together never wavering, which only makes the memoir more heart-breaking, as it is clear that Bo is no longer around.

Like Tuesdays with Morrie, Twelve Thousand Days focuses on one pinnacle event in the writer’s life, and yet tells their entire story around it – both books are written eloquently and with a clear description of how grief takes hold of one’s self.

However, it also serves as a reminder, whether the author meant to write it this way or not, on how important it is to take life as something that is unguaranteed from one moment to the next.

Undoubtedly one of the best memoirs I have ever read, The Choice emphasises the human capacity to choose how they live their life – in fear, in regret, in jealousy, in hope.

Edith Eger entered Auschwitz when she was just seventeen, discovering both her parents have been killed and nearly dying during the year she lived there. When the war ends, and she is eventually freed, Auschwitz never fully lets Edith go; instead, it takes root in her heart and her head, refusing to be forgotten.

As Edith becomes educated and begins a family she begins to realise that she needs to process her trauma and grief from her time in Auschwitz if she is ever going on living, and the choice to overcome her demons, through study, perseverance and love, is what the novel is all about.

As in books like Tuesdays with Morrie, there are lessons to be learned here, often in the form of anecdotes, or after reading a particularly terrible extract from Edith’s memory of the concentration camp. As difficult as some of the extracts are to read, the overall message of The Choice will change your life if you let it.

The First Phone Call from Heaven, by Mitch Albom

As the name of this novel would suggest, a small town on Lake Michigan begins to receive phone calls from the departed – many believe it is a hoax, but how does the caller know so much about those they are calling or those they are claiming to be? Could they indeed be these people?

A grieving father can’t make up his mind on the phone calls and sets out to get to the bottom of it, but disrupting people’s beliefs is never an easy task, and often the truth is more hurtful than a lie. Like Tuesdays with Morrie, the novel’s main focus is on grief and loss, and Albom’s storytelling is just as entrancing in The First Phone Call from Heaven as it is in his memoir.

The novel also deals heavily with the theme of faith, and where we often place our beliefs and though it can leave us vulnerable to be taken advantage of, it is more important to believe in something than nothing at all.

Before I Die, by Jenny Downham

Sixteen-year-old Tessa is dying, and she has known this for as long as she can remember. Sick of being sick, she makes a list of all the things she hopes to do before she dies, and number one is sex.

On the path to feel something, Tessa puts herself into dangerous and often illegal positions in an attempt to have a normal teenage experience, knowing she is unlikely to reach full adulthood.

Before I Die is a quirky story about what it means to be alive, Downham creates Tessa’s stream of consciousness perfectly, evoking all the fears, desires and randomness of being a teenage girl, coupled with an overwhelming and unavoidable sense of death.

The novel’s narration is simple and straight-forward, able to be enjoyed at any age group and as in books like Tuesdays with Morrie, this story portrays that sometimes someone needs to be dying in order to grasp the importance of living.

When All Is Said, by Anne Griffin

When All Is Said is very like Albom’s novel The Five People You Meet in Heaven, for the very fact that the protagonist, Maurice, prepares a toast for five significant people in his life on one evening in a dark pub. Like in Tuesdays with Morrie, this novel is about bereavement and the lessons that are learnt through the traumas that we suffer.

That Maurice has suffered through his long life is clear through each of his toasts. He toasts to his brother, his daughter, his sister-in-law, his son and his wife, and each monologue is illuminating and devastating in equal measures.

It taps into men’s difficulty with expressing their emotions, and Maurice’s loneliness is palpable through the pages, his regret tangible.

Maurice isn’t the most likeable character – in many ways he’s probably one of my least favourite protagonists that I’ve ever read, but his flaws and mistakes are what make the novel so real, without which no lessons would be learned.

Like Tuesdays with Morrie, Restless Souls deals with comradery and grief. Three best friends Tom, Karl and Baz have grown up, but they haven’t moved on from their pain. As teenagers, they dealt with the death of their friend Gabriel, and now as adults, they must deal with Tom’s trauma.

Travelling back from Sarajevo where he spent years as a war correspondent, Tom is shell shocked and bereaved. Karl and Baz find themselves unable to help him, enlisting the help of a miracle facility in California that promises to pull their friend out of his darkness.

But will they survive the trip there and back? In Restless Souls, there is a hint that there’s something larger at play, something outside of our common understanding of the world, something Tom has been exposed to and must make peace with before he can return fully to the land of the living.

This is not unlike the wisdom and truth that Morrie tries to pass onto Albom in the hopes he will live a full life and never have any regrets.

When Wade and his wife Jenny go on a trip with their two daughters, they don’t expect the tragedy that is to fall upon them, destroying their family in one fatal swoop. Years later, Ann, Wade’s second wife, is determined to understand the disaster, in a race against time as Wade’s memory is beginning to fail.

Loss pervades the pages of Idado and just as in novels like Tuesdays with Morrie, the truth lies in the hands, or in the head of someone who is not long for this world. The truth is not always what you want it to be, or where you want to find it and this novel portrays the difficulties of negotiating with a painful memory, and also putting it to rest.

The way Ann seeks healing is not unlike how Albom seeks it with his conversations with Morrie, making this a beautiful, if not tough read to follow up Tuesdays with Morrie.

These books, whether they are non-fiction or fiction, all teach lessons through anecdotes, just as in Tuesdays with Morrie. They often offer the reader difficult truths, about life, about death, about themselves, but if one is willing to take them on, they will change you irrevocably.

Are you searching for more books like Tuesdays with Morrie? Have any recommendations that didn’t make the list? Let us know in the comments! 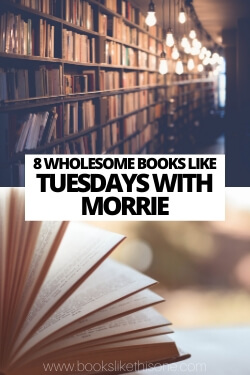