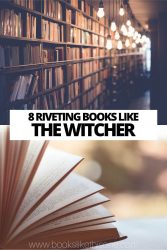 Are you looking for books like The Witcher series?

Meet Geralt of Rivia, a mutant and monster hunter for hire known simply as ‘a witcher’. Hated and revered in almost equal measure by sorcerers, kings, elves and dwarves, Geralt is a highly-skilled fighter trained to kill the various beasts and nasties that sometimes plague human lands.

However, not all monsters are evil. Not every human is good, and Geralt is forced to endure bigotry, racism, hate and more.

This series of dark and often humorous fantasy tales is perhaps best known to western audiences via the award-winning videogames and the Netflix TV adaptation. However, The Last Wish was first published in 1993 and pre-dates big hitters like A Game of Thrones (1996) and The Name of the Wind (2007).

If you’ve already accompanied Geralt on his journey and are looking for other books like The Witcher series, then perhaps a few of the following titles will interest you.

The Monster of Elendhaven, by Jennifer Giesbrecht

Books like The Witcher series delight in subverting a reader’s expectations. Monsters are called ‘monsters’ because we fear the unknown. In The Monster of Elendhaven, a thing without a name is stalking the seaside city of Elendhaven.

Sent out on errands by his sickly master, the monster is evil and vicious, hiding under the name of Johann as he stalks his victims. Yet things begin to change when one of his intended victims turns out to be just as much a monster as Johann.

This is a book that will dig its claws into you from the very first page and refuse to let go until you’ve finished the story. The interplay between Johann and Florian is where the narrative truly sings, but the world and the various other characters that populate it are superb.

If you liked The Witcher series, you must read this.

There are some books like The Witcher series that feel like a bard is singing the story to you. Smiler’s Fair is one of them.

We are introduced to five separate characters all wrestling with their own demons. Following so many different people can be draining but Nethmi, Dae Hyo, Eric, Marvan and Krish will keep you thinking long after you’ve turned the final page.

The ‘Smiler’s Fair’ is a travelling medieval-style carnival but is used more as a tool to help ground the characters in this rich fantasy world and give the reader access to their intertwined stories. I really enjoyed reading this and am a little sad that it doesn’t receive as much attention as some other heavily marketed novels.

Nevertheless, I would highly recommend this well-told grimdark fantasy.

There are some books like The Witcher series that on the face of it, bear little resemblance to the eponymous mutant monster hunter. Yet many of the themes Clark explores in The Unbroken can be found in The Witcher series.

Whilst the setting of Touraine and Luca’s world is steeped in the blood-drenched history of white colonialism in Africa, there is a lot here that readers of The Witcher will relate to. Racism, sexism, homophobia and more flow throughout both stories.

The chemistry between Touraine and Luca even bears a similarity to that of Geralt and Yennefer as the two dance around each other, both desperate not to be distracted from their goals, yet unable to pull away.

The Unbroken is filled with diverse characters, many of whom are queer, gay and bi-sexual. The narrative feels seeped in Clark’s own lived experience and study of history-making the story at turns horrifying, wonderful and painful.

Anyone that claims fantasy cannot examine real-world history and the horror it continues to inflict on people today would be well advised to read books like The Unbroken. Plus, it’s a great read!

There are similar titles to The Witcher that enjoy playing with standard monster tropes. Octavia Butler is an author who does this very well.

Fledgling follows Shori, a 53-year-old amnesiac who can’t remember anything of her former life and has some very inhuman abilities and needs that lead her to understand that she is some sort of vampire.

This story veers firmly away from books like Twilight, instead choosing to focus on the themes of abuse and horror as Shori gradually uncovers the truth about her past along with her mental age. The biggest difference in the vampires here lies within the relationships they have with humans.

Rather than vicious hunters who slaughter their prey, the ‘Ina’ have a symbiotic relationship with humans who share their blood as Ina saliva offers longer life amongst other things. Some readers might feel uncomfortable reading Shori’s story, but I recommend you persevere.

The Court of Broken Knives (Empires of Dust 1), by Anna Smith Spark

Anna Smith Spark has become known as the ‘Queen of Grimdark’ in recent years, and reading The Court of Broken Knives you can understand why.

Books like The Witcher series sometimes focus in on certain details that leave your mind filling in very nasty blanks that haunt your dreams. Bad stuff happens to innocent people here and the different style of Spark’s writing brings it to the forefront of your mind.

Story-wise, we follow a company of decent, ordinary soldiers sent on a mission to cross the desert, reach the city of Sorlost and kill the decadent Emperor. Marith is a peculiar boy marching with the soldiers and trying to escape a past he can’t forget.

However, as we all know, history has a way of catching up with you. If you enjoy Sapkowski’s unhurried but perfunctory style of writing, there is a lot to like in The Court of Broken Knives.

Best known for his horrific and often boundless imagination, The Gunslinger is the first book in King’s The Dark Tower epic. Books like The Witcher series often have a loner at the centre of the story and Roland of Gilead is the ultimate loner.

Determined to catch The Man in Black, Roland’s journey starts here but eventually takes him on a trip to parallel worlds (including several that are virtually identical to our own) as he seeks to stop The Man in Black and find the Dark Tower that haunts his dreams.

Roland is much like Geralt: gruff, introverted and often monosyllabic in his conversation. It is the characters he picks up along his journey that make this series worth reading and Jake, Odetta/Susannah and Eddie help bring colour to Roland’s gruff exterior.

The Gunslinger itself is not the strongest entry, but it does represent a fascinating start to the saga. If you like the sometimes dreamlike and gentle pace of The Last Wish then you might enjoy The Gunslinger.

There are books like The Witcher series that have you grinning from ear-to-ear as you read. David Mogo, Godhunter is one of these. Like a cross between American Gods, The Witcher, Rivers of London and so many other dark fantasy/urban fantasy novels, David’s story is one worth reading.

Set on the streets of a modern-day Lagos filled with thousands of gods, David Mogo, a demigod, trudges around the underbelly trying to earn money as a freelance Godhunter (can you spot the similarity to Geralt yet?).

Things begin to go very bad when David captures a high god for an Eko wizard who in turn conjures a legion of Taboos (feral godling hybrids) to take control of the city.

Knowing he needs help, David teams up with his foster wizard, the twin sister of the high god he captured and a Muslim teenager whose speech is impaired. David Mogo, Godhunter is a welcome change to the standard western (white) urban fantasies that dominate bookshelves.

A realistic portrayal of a popular city, an entertaining cast of characters and a sharp study of Nigerian police brutality. Read it now.

Trail of Lightning (The Sixth World 1), by Rebecca Roanhorse

Whilst much of the world has been drowned by rising sea waters, the former Navajo reservation of Dinétah has been reborn. Gods and heroes walk the lands again, but so too do the monsters of legend.

Maggie Hoskie is very much like Geralt of Rivia. She’s a supernaturally gifted killer and prefers to be left alone where possible. Unfortunately, there’s a small town that needs help to find a missing girl and Maggie is their last hope.

Fans of The Witcher as well as general urban fantasy and post-apocalyptic novels should enjoy Trail of Lightning, the first adventure in The Sixth World series.

The tales of Geralt of Rivia have reached a mass cross-over market with the mega-successful series of videogames and the highly popular Netflix adaptations. The gruff, seemingly emotionless witcher, has become a global sensation with all his flaws and strengths exposed to millions of people who have never read the books.

If you enjoy The Witcher books, games or TV show (or perhaps all of them?), the titles above have a lot for you to like.

Are you searching for more books like The Witcher? Have any recommendations that didn’t make the list? Let us know in the comments! 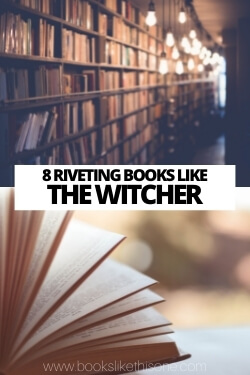