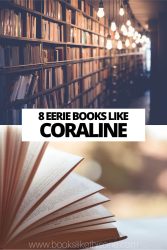 Coraline is one of those books that just creeps you out. Neil Gaiman specialises in the twisted and creepy, and with Coraline he plays expertly on childhood hopes and fears.

Gaiman has been incredibly successful in his career largely because of his ability to convince the reader that all is not quite well if you peek behind the curtains at night. The Other Mother of Coraline remains one of literature’s greatest villains and is frightening in her believability.

There may not be monsters under your bed, but there might be some lurking behind a little door leading to a duplicate world. If you’ve already shivered yourself to sleep from Coraline, what other books like it are out there?

The New Mother and Other Stories, by Lucy Clifford

The Other Mother of Coraline was reportedly inspired by the new mother in Lucy Clifford’s Victorian era tale. Blue-Eyes and Turkey are sisters who meet an odd girl with an odd instrument she calls a ‘peardrum.’

The girl tells them there is a little man and a little woman inside who come out and dance and tell secrets. The catch? The girl says she only shows it to ‘naughty children.’

When the girls go home and tell their mother of their plans to be naughty, their mother sighs and tells them if they are naughty, she will have to go away and send home a new mother, one with glass eyes and a wooden tail.

If you’ve read Coraline this will sound oddly familiar. The New Mother is a wonderfully creepy folktale and it is easy to see how it inspired books like Coraline and similar titles.

Through the Looking-Glass and What Alice Found There, by Lewis Carroll

Books like Coraline enjoy exploring dark reflections of our own world. In Through the Looking-Glass and What Alice Found There is another story that explores this theme literally.

Set after Alice’s trip to Wonderland, Alice is watching her kitten play with a ball of string before snatching Kitty up and telling her about “Looking-Glass House” a world on the other side of the mirror.

It’s not like our world as everything is backward. And before you can say “Hey Presto!” Alice finds herself on the other side of the mirror.

What happens next is pretty trippy to say the least. Games of chess, encounters with the Red Queen, trying to save the White Queen’s daughter, insulting flowers and a non-sensical poem called “Jabberwocky.”

There have been many film and television adaptations of Alice’s Adventures in Wonderland but not so many of Through the Looking-Glass (I don’t count the Disney film adaptation, which was a mangle of both stories). This is a shame, as if you liked Coraline, there is plenty to enjoy here.

The Thief of Always, by Clive Barker

The 1990s was filled with incredible fantasy stories for children and adults alike, and books similar to Coraline were among them.

The Thief of Always is a wonderfully creative story that follows Harvey, a clever ten-year-old who is experiencing what we would now class as Seasonal Affective Disorder (SAD).

It’s the middle of winter and Harvey is tired of school, tired of homework and tired of the winter months. Up pops a strange creature who tells Harvey about a place called the Holiday House, where Harvey can have anything he wants and it’s Christmas every evening.

For Harvey, this sounds wonderful, but of course there is a darker edge to the creature’s promise. If you’ve ever spent your days always looking forward to things, you will connect with this story.

Harvey’s journey reminds us all of the importance of living in the present and remembering that every day is precious.

The Mostly True Story of Jack, by Kelly Barnhill

Like Coraline, Jack feels invisible. People rarely remember his name as Jack floats through life, a faint breeze amongst the gales of people. His parents have got divorced and as his home life falls apart, he’s sent to live with his aunt and uncle in Hazelwood, Iowa.

But strange things begin to happen when Jack arrives.

For the first time people seem to notice him. He makes friends, but the town bully beats him up and the richest man in Hazelwood appears to want Jack dead. Jack has to figure out what’s going on and why.

The Mostly True Story of Jack is a confident novel and whilst there has been some critique from readers wishing the POV had been switched to the character of Wendy, it is easy to become drawn into Jack’s tale.

The Girl from the Other Side: Siúil, A Rún, Vol. 1, by Nagabe

The Girl from the Other Side is a grotesque, yet sweet fairy tale that is addictive to read.

In a faraway land, there are two kingdoms, the Outside and the Inside. The Outside is filled with beasts who can curse you with a touch. The Inside is where humans live in safety and peace. When one girl meets a beast, a magically sweet tale begins set in the twilight where day and night collide.

I’m a sucker for stories like this, and whilst I don’t read as much fantasy manga as other readers, Shiva’s story really hooked me from the start. This is only the first volume, so I would encourage you to read on if you want to know more about the world.

A Monster Calls, by Patrick Ness

Sadness is an essential part of human nature. We rely on sorrow to help define our happiness and vice-versa. You cannot be a complete human without both. Life just isn’t like that.

Books similar to Coraline often draw out the painful as well as the frightening sides of life and A Monster Calls is no exception.

Ever since Conor’s mother fell ill, he’s been having the same dream every night, but this night is different because there’s a visitor at Conor’s window. This is no ordinary visitor. It’s an ancient almost elemental creature that may or may not appear to people in need. And it promises to tell Conor three stories in exchange for the truth.

Forced to confront all the painful things that have and are happening to him, Conor begins to learn that life isn’t black and white.

Based on an original idea by the late Siobhan Dowd A Monster Calls might leave you crying by the end, but you’ll feel better for it.

For me, the late Diana Wynne Jones has always felt like an old friend who’s held my hand in life since I was at school. To this day, her books make me feel warm and comforted with their humour and magic. There aren’t many books like Coraline that deal in humour as well as darkness, but Enchanted Glass is one of them.

Andrew Hope’s magician grandfather has just died leaving his house and field-of-care to Andrew. But when young Aidan Cain turns up from an orphanage requesting sanctuary, Andrew is left wondering who this boy is and why he feels familiar?

What makes Enchanted Glass work is Wynne Jones’s ability to not create a barrier between child and adult in the reader’s mind. She treats both equally as people, just people at different stages of their lives. When you look closely, you see this throughout her work, and it is a skill few writers have ever matched.

Enchanted Glass is also another fine example of how to do magic in a believable way; natural, and instinctive to each individual practitioner. In short, believable, with rules that make sense.

Are you a fan of Diana Wynne Jones’ novels? Check out our list of books like Howl’s Moving Castle!

The Witches, by Roald Dahl

A few years ago, I sat on a panel at BristolCon (pre-pandemic) next to Jasper Fforde, Anna Smith Spark and a few other highly successful fantasy writers and authors. We had been asked which book we would choose to take with us if we were stranded on a desert island. “Desert Island books”, if you will.

My high-profile contemporaries chose books that firmly belong in the adult category, I chose The Witches for three reasons:

1. It is one of the first books I recall reading ill in bed as a seven-year-old and the story lodged itself in my brain.

2. It took me through a range of emotions, from fear, to humour, to joy and beyond.

3. It didn’t treat the reader like a child. In fact, it showed children just how stupid and nasty adults can be (not including the unnamed boy’s grandmother of course).

Whenever comparing books to Coraline, it is hard to avoid mentioning The Witches in my view. Dark, devious and a lot of fun. I understand that there have been challenges against The Witches over the years accusing it of promoting a misogynist view of women. I can only respond by saying that my seven-year-old brain never read the book in that way.

In fact, The Witches did the opposite, encouraging my curious mind to wonder if there were any witch hunters like the boy’s grandmother in our neighbourhood.

This list could go on for a long time. There are many books like Coraline ready to scare you across bookshelves worldwide. The ones above are just some that you can look for, but if you think we’ve missed an important title, let us know in the comments below. Just pray that The Beldam doesn’t appear to challenge you…

Are you looking for more books similar to Coraline? Have any recommendations that didn’t make the list? Let us know in the comments! 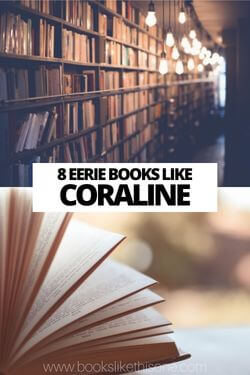