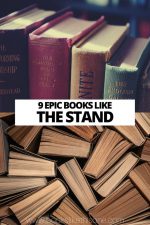 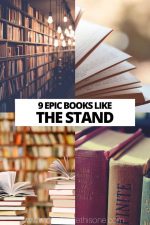 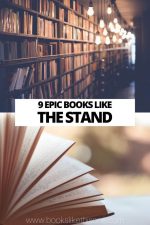 Stephen King’s 1978 post-apocalyptic epic The Stand is one of the prolific writer’s most notable and popular works, transporting millions of readers over the years to a world where 99.4% of the world’s population has been killed due to the accidental release of a weaponised strain of influenza. The Stand follows a number of themes around rebuilding society and, despite its great length, it continues to compel readers to this day. However, if you’ve finished this Stephen King masterpiece and are on the hunt for more books like The Stand, you’ve come to the right place.

Whether you enjoyed The Stand because you liked the themes of rebuilding a society and the battle between tyranny and democracy or for the psychological aspects of being some of the last humans on Earth, these nine books like The Stand are sure to move you much in the same way.

Where Stephen King’s novel covers the end of society due to the outbreak of a weaponised disease, Max Brooks’ World War Z: An Oral History of the Zombie War takes a stab at the effects of a zombie apocalypse.

Originally written as a follow-up to Brooks’ more lighthearted Zombie survival guide, World War Z has a solemn tone and is told through the perspective of a number of different witnesses to the Great Zombie War.

Much like in The Stand, this zombie apocalypse is caused by the release of a pathogen into the world and the uninfected citizens must deal with the repercussions and rebuild the society after the threat has been vanquished. Turned into a feature film starring Brad Pitt in 2013 and following very similar themes, World War Z is a great novel to read if you’re looking for books like The Stand.

The first instalment of a trilogy, Margaret Atwood’s Oryx and Crake is an excellent addition to your reading list if you’re looking for books similar to The Stand.

This post-apocalyptic work of speculative fiction is set in an indeterminate amount of time after the demise of a society that was run entirely by multinational corporations. Told through a series of flashbacks, the reader follows the protagonist and learns about how the world got to the way it is in the present-day of this novel.

Following the same themes as a global pandemic resulting in the loss of the majority of human society, Onyx and Crake and its sequels The Year of the Flood and MaddAddam are excellent choices for you if you enjoyed reading about the post-apocalyptic world of The Stand.

If you enjoyed the post-apocalyptic nature of The Stand and were especially fond of each character’s respective odyssey to Boulder or Las Vegas, then Cormac McCarthy’s 2006 novel The Road is a great choice for you.

Set in the US after an apocalyptic event that wiped out the majority of the population, The Road follows an unnamed father and son and they travel across the country in search of the sea. As both characters are very sick and have limited means for survival, the journey is a harrowing one.

The Road, though much shorter in length, explores many of the same themes as The Stand and was also turned into a feature film in 2009. It is a great addition to your reading list if you are interested in the psychology of human survival after the apocalypse.

I Am Legend, by Richard Matheson

If you’re looking for an excellent novel like The Stand and you interested in the aspect of human survival after the majority of the population has been wiped out, then Richard Matheson’s 1954 novel I Am Legend is a fantastic choice.

In the present day, this novel is probably best known of the 2007 film adaptation starring Will Smith, however, I Am Legend did a lot to establish the well-known tropes of the vampire/zombie apocalypse genre that is so prevalent today.

The novel follows Robert Neville as he goes about his daily life in Los Angeles after he is the last known man surviving from a horrible pandemic. The novel explores many of the same themes as the others on this list of books like The Stand, such as human resiliency, survival, and the psychology of society.

Written by one of the mother’s of the science fiction horror novel, Mary Shelley’s 1826 post-apocalyptic novel The Last Man is one of the best additions to your reading list if you’re looking for books like The Stand.

As one of the first works of fiction to explore what might happen to society after an apocalyptic event, The Last Man follows the history of the world before, during, and after the apocalypse (until the year 2100) and the reader can truly see the decline of civil society.

Though not nearly as popular as Shelley’s most notable work (that would be Frankenstein, for those who are not familiar with this particular literary genius), The Last Man actually explores many of the same themes as her more famous novel. Most notably, the effects that science and medicinal knowledge in the wrong hands can have on society.

Often the most cited novel for readers looking for more books like The Stand, Robert McCammon’s 1987 apocalyptic novel Swan Song is an excellent read if you’re looking for something similar to Stephen King’s novel.

Set in the world directly after a complete nuclear war and the subsequent destruction of society as we know it, Swan Song is of the same epic proportions as The Stand, clocking in at nearly 1,000 pages.

Because of the nuclear radiation, this provokes an evolution in the human race amongst the survivors of the devastation and the novel follows the society and how it functions after its almost complete and total destruction.

If you are keen to crack open another epic novel with similar themes to The Stand, then Robert McCammon’s Swan Song really is a fantastic choice for you.

Children of Men, by PD James

Though not entirely post-apocalyptic in the sense of The Stand (meaning there is no disease that wipes out a population), PD James’ 1992 dystopia Children of Men examines an England that has been gravely affected by mass infertility.

Set in the year 2021, this novel focuses on a society that has developed in reaction to massively declining birth rates due to mass infertility and how they are training everyone for the survival of the human race. It explores how an intervening government has gone to great lengths to test for fertility in both men and women and the strange behaviours and trends that society has taken to in reaction of there no longer being any children.

Though more of a pre-apocalyptic novel, Children of Men is still a great choice if you’re looking for books like The Stand, especially if you enjoyed the beginning of the novel and reading about the decline of society before it was entirely wiped out. The book was also turned into a feature film in 2006.

Straying away from the post-apocalyptic genre and moving over to dystopian epics, David Foster Wallace’s nominal work Infinite Jest is a good choice for you if you’re looking for novels like The Stand, especially if you are more interested in the human psychological and societal aspects of the book.

Set in a not-so-distant future where the president of the USA is a former pop star who is unlikely to ever be removed from office, there is a movie that has people completely unable to look away from it for the rest of their lives, and each calendar year is no longer numbered but sponsored by multinational corporations for tax revenue (ie, The Year Whisper-Quiet Maytag Dishmaster), Infinite Jest is a monster read (over 1,000 pages!) that brings every bit of modern society to questions, despite its 1996 publication date.

Touching on themes like mental health, addiction and how a society functions, Infinite Jest may not be in the same post-apocalyptic genre as the previous novels on this list, however, it is an excellent addition to your reading list if you want to explore similar themes in a different context.

It, by Stephen King

If you aren’t looking for books like The Stand because you liked the post-apocalyptic society and more because you enjoyed Stephen King’s famous writing style, then you can’t go wrong with reading another of his most famous novels, and It is a fantastic choice.

Set in the seemingly idyllic town of Derry, Maine, It follows the story of some Derry residents as the town is repeatedly terrorised by a murderous clown called Pennywise.

Known for its epic length and incredibly captivating writing, It is not for the faint of heart or for those who are already battling with a fear of clowns. It seriously will not help you get over it and you may develop coulrophobia after reading. Nevertheless, if you’re a Stephen King fan or a horror fan, then It is a great book for you!

There are numerous books like The Stand that you could add to your reading list. Whether you’re interested in how society will function after the apocalypse or you’re just looking for another great Stephen King read, you’re sure to find another novel that moves you in the same way.

Are you searching for books like The Stand? Are there any of your favourites that didn’t make the list? Let us know in the comments! 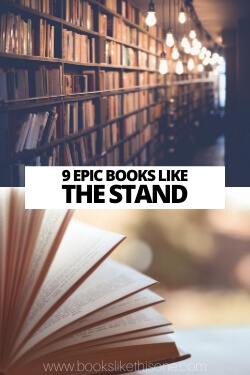