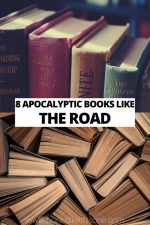 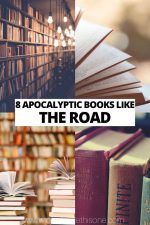 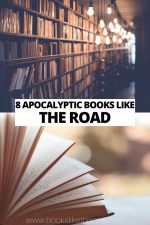 The Road follows a father and son who have been travelling a path, a path they must continue upon but have no idea where it leads, in the midst of a barren world torn apart. There are distinct themes of isolation coupled with companionship, and the novel has won many awards, including the prestigious Pulitzer Prize. The following books like The Road portray similar stories of world destruction, and how people survive in its wake.

Best known for her classic horror novel Frankenstein, Mary Shelley wrote The Last Man nearly a decade after her first novel and it is an excellent choice for those looking for books like The Road.

It holds many of the same themes of Frankenstein, such as isolation and the clash between science and religion, but it stands up in its own right, and in 1960 was given the credit it is due. Shelley uses the novel to mourn her late friends; her husband Percy Bysshe Shelley, and Lord Byron – some seem to think the novel is a tale of how the Age of Romanticism came to an end.

The novel follows Lionel throughout his life, beginning in 2073. As a plague begins to spread throughout the world, Lionel watches the people he cares about fall victim to it, or the anarchy that comes in its wake. Just as in novels like The Road, The Last Man examines relationships and the frailty of humanity in the face of a greater force.

The Stand, by Stephen King

Reading The Stand may make the reader obsess, and adopt conspiracy theories, particularly with what’s going on in the world at the moment, but it is a masterful story of a post-apocalyptic world.

When a dangerous strain of influenza is accidentally released from a lab, it claims the lives of 99% of the population. The novel’s main focus is how the world deals with this pandemic, and in a nutshell, things go from bad to worse. Society begins to crumble, with people dying not just from the influenza, but from the violent actions of terrified people.

The novel could read as a prequel to The Road, at least, The Stand provides more of a lens into the anarchy that could have led to the end of the world. The Road is more about how to survive the apocalypse, and the companionship required to do so, as opposed to the events that led there.

And this is what the beauty of the novel is, but for those who may have been more curious about the destructive events themselves, The Stand is for you.

I am Legend, by Richard Matheson

I am Legend has spurned several film adaptations, the most recent in 2007, with the movie keeping the name of the novel, starring Will Smith.

It is a post-apocalyptic novel, similarly to The Road, about one man who has survived the epidemic that has swept the world, turning regular humans into vampiric beings. Robert Neville, having lost his wife and daughter to the virus, spends his days both killing these vampires, as well as learning all he can about the plague that seemed to turn them to begin with.

This novel plays on one of humanity’s deepest fears – what happens if something infects us all – could vampires or zombies really be possible due to a manmade or natural virus? Is this a form of natural selection or something more sinister?

The novel has its faults but poses many interesting scenarios and is a true vampire story for anyone who is interested. It zones in on the theme of loneliness, just as in books like The Road.

The Children of Men, by P.D. James

The Children of Men is about the disarray of society in the midst of a fertility crisis. When the rate of fertility plummets via male sperm count being reduced to zero, a civil war breaks out. The novel is narrated in part by Theo, who documents these events in a diary.

His cousin takes over as the dictator of this version of England, eliminating democracy in the process. The last people to be born are referred to as Omegas, and due to their somewhat elite status, they act recklessly and without consequence. When a woman turns up pregnant after years of no new-borns, it sends this broken society into a frenzy.

The novel, just as in books like The Road, imagines a world like our own, but how it would fare against something destructive, that undoes centuries of progress, and reduces humans to their instinctive state.

Oryx and Crake opens with the introduction of the elusive Snowman, who has been wandering the barren landscape that is now the Earth alone for the past few years, amongst a new species called Crakers, who aren’t quite human but aren’t quite inhuman either.

Like the father and son in The Road, Snowman must learn to live in this new environment, in isolation, and the dangers he must face. In The Road, there is less emphasis on what was, whereas the memories of the world pre-apocalypse and people lost plague Snowman, as we are taken back to the time when he was Jimmy, spending time with his best friend Crake, and falling in love with the indefinable Oryx.

Just as in novels like The Road, there is an emphasis on loneliness and vulnerability, and the importance of human contact.

The Passage, by Justin Cronin

The first in a trilogy about a post-apocalyptic world, The Passage portrays how this epidemic came to be. When a young girl called Amy Bellafonte is taken in order to be used for an experiment, it becomes the catalyst for a series of events that dooms the entire planet.

With fears of a virus spreading, a team of American scientists, coupled with the help of the government, work to create a cure, a cure they have already used on twelve subjects, who begin to display alarming symptoms. This novel spans over a period of several centuries, documenting the dissolve of society, as these new beings come to wreak havoc on the Earth.

The sterility of the new world reflects the same emptiness of the one that is seen in The Road and once again emphasises on the importance of close relationships in the absence of all else. If you liked The Road and the effective use of world-building that appears in its prose, then you’ll love The Passage, and the two novels that follow, The Twelve and The City of Mirrors.

The Host, by Stephanie Meyer

Best known for her young adult vampire novels, The Twilight Saga, Stephanie Meyer excels in her dystopian novel The Host, building a world in which an alien life form invades Earth and must take up host within a human’s body in order to survive.

This process is normally very straightforward – the host gets stronger as the original owner of the body gets weaker. However, in the case of Wanderer, a “soul” who has just inhabited a new body, the owner of said body, Melanie, refuses to go away, remaining alive and well, making Wanderer’s transition difficult.

Like The Road in how it imagines what could become of the world, The Host provides a frightening depiction of what could await humanity in the future and makes it clear that we never quite know exactly what’s around us.

Like many of these other novels, this novel takes the route of world destruction through a medical pandemic, an influenza called the “Georgia Flu.” The novel centres on several characters, and where they all were when the flu broke out, as well as after, and how they were affected by the events that spiralled afterwards.

Station Eleven focuses on the resilience found in humans – the instinct to survive above all else. These characters still fall in love and try to remain cheerful in the face of great darkness, proving that even in the face of great adversity, there is still so much to live for.

This message is conveyed rather differently in most of these books like The Road, but the memo is the same – there is always a desperation to keep on fighting.

The Road is a dark novel, full of terrifying imaginings, but its focus on human connection is touching, if only you seek it out in this frightening tale. Like The Road, all these novels depict people who are willing to keep fighting, whether that be for themselves or other people, and perhaps this is why they are so fascinating for us to read.

Are you looking for more books like The Road? Have and recommendations that didn’t make the list? Let us know in the comments! 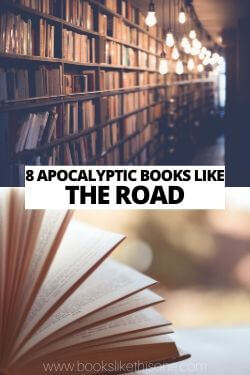