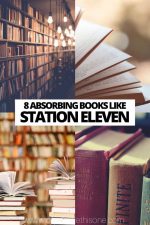 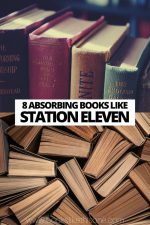 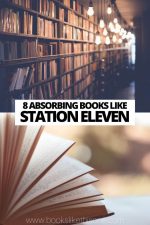 What will become of the human race in the wake of a pandemic is not only topical, but something writers have been fascinated by for years and books like Station Eleven by Emily S.J. Mandel is some such novels that investigate these circumstances.

In Station Eleven, an actor suffers a heart attack on stage, and despite the intervention of an EMT, he dies – the novel then informs its reader that within three weeks, everyone else in the theatre will have died as well.

“Georgia flu” wreaks havoc on the globe, claiming the lives of most of civilisation, and this is only further depicted when the novel jumps ahead twenty years, portraying factions of the remaining people in their pursuit of survival.

The following novels each portray a dystopian world, one where civilisation has crumbled in one way or another, and just as in books like Station Eleven, the depths humanity is willing to go to in order to continue on.

Becoming a widely successful series of films, this trilogy begins with The Hunger Games, named so after an event that takes place every year where twenty-four young people are put into an arena with the one goal of fighting to the death.

Panem, what is left of North America, has been divided up into districts, each specialising in an industry, and providing it for The Capital, where people live in luxury.

As a punishment for past rebellions, a boy and a girl from each district are chosen at random to participate in The Hunger Games, in an act to consolidate The Capital’s power, and that of their leader, President Snow.

When Katniss Everdeen volunteers herself in place of her younger sister, she must learn to fight if she has any hopes of returning home – but when it comes down to it, can she really kill someone else in order to survive herself? Just as in novels like Station Eleven, in the wake of global disaster, a new civilisation has risen in its place and a dangerous one at that.

Just like in Station Eleven, The Road portrays a world that has been ruptured by some sort of pandemic, although it is less clear about what.

A man and his son walk The Road, only hoping to survive long enough to discover some solace. Like The Symphony in Mandel’s novel, they hope to avoid running into other gangs, as the world McCarthy has created is one where it is every person for themselves.

This novel doesn’t shy away from the darkest potentials of an anarchistic society, one that’s fallen into complete chaos – cannibalism and what you should do if you fall into the hands of a gang of cannibals is a huge part of the novel, but it is this brutality that makes McCarthy’s novel so brilliant, so glittering, so unafraid of telling it how it is.

The Road, like Station Eleven, stands apart from other novels in its genre.

Have you already read this haunting novel? Check out our list of more books like The Road.

The Wall, by John Lanchester

John Lancaster’s take on civilisation breaking down is very reminiscent of Trump’s ideals for America – in The Wall, a literal wall has been built around Britain, that must be watched at all times in order to stop invasions or refugees from coming into the country.

Everyone must serve a two-year sentence, after which they are free to live their lives; that is, of course, as long as you don’t get caught letting anyone in on your watch. As portrayed in books like Station Eleven, when faced with the collapse of civilisation as we know it, drastic and dramatic decisions are made, and often not for the better of society.

Joseph is the protagonist of this novel, serving his time on The Wall, and praying his time will pass quickly so he can return to a semi-normal life, even become a breeder with another watcher he becomes close to. But in a society such as this, it is never that simple.

The Passage, by Justin Cronin

Just as in Station Eleven, The Passage depicts a virus that is inflicted upon the world and wipes out much of civilisation. Unlike Station Eleven, this virus claims its victims by turning them into Virals, or what we perceive to be vampires, in a government experiment gone terribly wrong.

A hundred years later, what’s left of humanity has rebuilt, keeping within the safe walls of a compound, unable to find a way to kill off the Virals.

The novel is ultimately about survival, and the best way to achieve this, not unlike in novels like Station Eleven. It depicts the strength of human connection even in the darkest of places, and both novels succeed in drawing the reader into caring about the characters.

The television series of The Passage flopped massively, and largely missed the point of the novel – in this case, as is often, the book is much superior to its visual adaption, so if you have watched it, don’t let it put you off reading the series.

Like the previous novels on this list, and other books similar to Station Eleven, something has wiped out human life as it was previously known, but what exactly has happened remains a mystery.

Snowman, a loner living out in the desert, and a survivor of this incident, journeys back in his memory to discover where it all went wrong, focusing in on Crake, his former best friend, and Oryx, the woman he loved.

What he remembers is Crake’s involvement in the pharmaceutical industry, as well as his work on genetic engineering, and slowly, the tale of the world’s demise comes to pass.

Much like Station Eleven, those left in the world are nomadic, trying to survive in the best way that they can, with the exception of Snowman, who seems to have given up on life, ready to pack it all in, consumed by his grief.

If you enjoyed Station Eleven, Oryx and Crake, and the two novels that follow, The Year of the Flood and Maddaddam are definitely for you.

By far the oldest novel on this list, Shelley introduces another radical idea about humans and survival in The Last Man. Following up from Frankenstein, which she boldly published eight years previously, The Last Man depicts maybe one of the first portrayals of human damnation in literature.

Like Station Eleven, Oryx and Crake, The Road, a flu is spreading throughout the continents, claiming the lives of millions, with the likely conclusion being complete human extinction. The novel follows Lionel primarily, who is anarchic and wild, and his friendship with Adrian, a member of the nobility.

The novel seemed to represent at the time an end to the Romanticism era in literature, with the death of Shelley’s husband, Percy Bysshe Shelley. Simply that it was written nearly two hundred years ago and reads as a modern-day dystopian novel makes it worth a read.

Another amazing dystopian novel by Atwood, The Heart Goes Last was written in 2015 and depicts America in ruins, where husband and wife Stan and Charmaine are struggling to survive, scavenging wherever they can.

When they are offered a new life at Positron, a kind of sanctuary/prison, they are at their wit’s end and take it without fully understanding what it might mean for their marriage.

Just as in novels like Station Eleven, Positron is a kind of faction that has been erected in the wake of chaos, in the hopes of bringing some order back to civilisation, but these attempts are not without sacrifices, and often those sacrifices are made by those most vulnerable.

Margaret Atwood always says her novels are not dystopian or science fiction, but merely speculative of what could happen, based on what she is already witnessing in the world – this only makes the ideas in her novels even more chilling.

The Children of Men, by P.D. James

The Children of Men is slightly different to Station Eleven in the pandemic it deals with – in P.D. James’ novel, the world is steadily coming to an end as there have been no children born in 25 years. England is now controlled by a totalitarian Warden, as they prepare for someone to eventually become the last person on Earth.

The novel is told through Theo, either in first-person narration or third-person omniscient narration – Theo is the cousin of the Warden and seems quite content to live out the last years of his lonely life without intervening. Until a rebellion group approaches him, looking for his unique connection to the Warden, in the hopes of changing some of the atrocities taking place with the older generations.

Just as in books like Station Eleven, there is a desire to create a new way of life, but it appears no one knows exactly what the right way of achieving this is. If you enjoyed Station Eleven for this reason, you’ll also enjoy The Children of Men.

These dystopian/speculative novels are so intriguing for the exact reason that we can only speculate as to what the end of the world would mean for the human race. Novels like Station Eleven, and the ones on this list, just depict one version of this, and that there are so many ways it could go is exactly what makes it so terrifying, and fascinating.

Are you searching for more books like Station Eleven? Have any recommendations that didn’t make the list? Let us know in the comments! 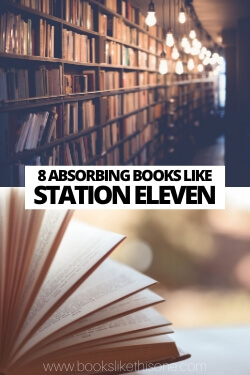