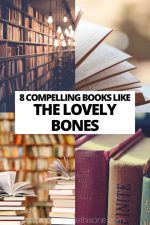 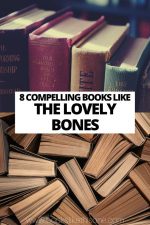 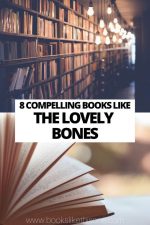 Alice Sebald’s 2002 novel The Lovely Bones is a powerful novel that tells the story of a family as told through the eyes of their daughter, Susie Salmon, who was brutally raped and murdered and narrates the novel from the afterlife. The novel follows the Salmon family as they grapple with Susie’s death and strive to find justice, along with the turmoil that losing a loved one can have on the dynamic. Met with much critical acclaim upon publishing, this was Sebold’s first novel and though it is not an easy read, it has many people looking for more books like The Lovely Bones.

While a number of books have been published in the years following Sebold’s, many of the books with similar themes to The Lovely Bones do fall short on things like compelling plot, good writing, or sympathetic characters. However, there are also a number of books that don’t sacrifice quality in the name of commercial success, especially with subject matter that is so important to be portrayed well. If you read and liked The Lovely Bones and are looking for more books like it, then make sure to check out these eight titles.

If you’re looking for books like The Lovely Bones, then a good option for you would be Alice Sebold’s 1999 memoir Lucky.

This powerful memoir recalls the events of Sebold’s life as a first-year university student who was raped and beaten as she was walking home through a park at night. After going to the police and reporting her rape, one of the officers told her that she was “lucky,” due to the fact that he had seen women in similar circumstances murdered.

Sebold’s memoir expertly covers the trauma that women face not only with a brutal rape, but also the struggle with finding justice and pressing charges. Sebold wrote the memoir to give a voice to the numerous women who had been in similar situations, to normalise talk about rape, and to make people feel less alone.

Though it is a true story and not a novel, Alice Sebold’s Lucky is a very good choice if you’re looking for a book like The Lovely Bones because it doesn’t trivialise or minimise the trauma of sexual assault.

Laurie Halse Anderson’s 1999 novel Speak is an excellent novel to read if you’re looking for books like The Lovely Bones. This young adult novel follows the story of high school freshman Melinda Sordino, an outcast who is painfully withdrawn to the point of being mute.

At the beginning of high school, she struggles to connect with her old friends and has been ostracised by the student population on a whole due to the fact that she is known to have called the police at a house party the summer before.

Throughout the novel, it becomes known that Melinda had been raped at that party and must continue to go to school with the boy who did it. When her former best friend began dating that boy, Melinda slowly regains her voice and learns how to speak out about her trauma.

Speak isn’t an easy book to read, but it does offer some respite to young women who may be scared to come out about assault or trauma and can provide some context to those who want to understand more.

Stephen Chbosky’s 1999 novel The Perks of Being a Wallflower is a book to read if you’re looking for novels similar to The Lovely Bones.

Set in the early ’90s, this epistolary novel follows the introverted Charlie as he begins high school in the aftermath of the suicide of his closest friend. At first withdrawn, Charlie begins to make friends and form relationships, all while coming to grips with some trauma from his own life.

Subject to both a lot of critical acclaim and controversy (if often finds itself on the ALA’s list of most frequently challenged books), The Perks of Being a Wallflower is a beautiful coming-of-age story that has offered respite to many teens struggling to make connections in the world. It also explores many of the issues that young people may face in high school, told through an empathetic narrator to help people struggling not to feel so alone.

The Fault in our Stars, by John Green

Though diverging from the themes of sexual assault in Sebold’s book, John Green’s 2012 novel The Fault in our Stars is a good read if you’re looking for books like The Lovely Bones.

The novel follows Hazel Grace Lancaster, a 16-year-old girl with terminal cancer as she meets and falls in love with Augustus Waters, a survivor of cancer that is now in remission.

The novel deals with many of the same themes as in The Lovely Bones, most notably, about familial relationships, searching for closure, and how young death can affect those who are closest to us.

The novel has received much critical acclaim since its publication and is perhaps, unfortunately, best known for the film adaptation released in 2014. Though the film version left a lot to be desired, the novel is beautifully written and incredibly powerful and is an excellent addition to a reading list if you’re looking for books like The Lovely Bones.

Already read this novel? Have a look at our list of books like The Fault in Our Stars!

Kim Edwards’ 2005 novel, The Memory Keeper’s Daughter, tells a compelling story of twins that were torn apart at birth and is a great book to read if you’re looking for novels like The Lovely Bones.

The book follows the story of Paul and Phoebe, twins born in the mid-1960s. Paul was born healthy whereas Phoebe was born with Down’s Syndrome. So as not to deal with the trials of raising a child with a disability, the father informs the mother that Phoebe dies upon birth and he intends to have her raised at an institution. However, the nurse who assisted in the delivery decides to raise Phoebe as her own.

The Memory Keeper’s Daughter tells an incredibly moving and compelling story of a family torn apart and the implications that a “death” of a child can have on a marriage.

The Virgin Suicides, by Jeffery Eugenides

Perhaps best known for 1999 Sofia Coppola film adaptation of the same name, Jeffery Eugenides’ 1993 novel The Virgin Suicides is a great book to read if you’re looking for titles similar to The Lovely Bones.

This novel follows the Lisbon family as they grapple with the suicide of one of their five daughters. Rather than address the reasons why their daughter may have killed herself, the parents instead isolate their remaining four daughters from their community, pulling them out of school and restricting them to their home.

Throughout the span of the book, the girls attempt to make connections with the boys across the street and the boys must deal with the emotional toll it takes on them when the four sisters all fulfil a suicide pact.

The Virgin Suicides follows similar themes as The Lovely Bones as it follows how the death of a young innocent girl (or, in this case, girls) can affect an entire community and shape the lives of many.

Emma Donaghue’s 2010 novel Room is a powerful book that is also most well-known for the critically-acclaimed 2015 film adaptation. It is, however, a great choice for you if you’re looking for books like The Lovely Bones.

Room is told from the perspective of five-year-old Jack, who has lived his entire life trapped in a small room with his mother and has only ever interacted with her and, occasionally, another man called Old Nick. It is revealed later that Old Nick is his mother’s captor and had abducted Jack’s mother years earlier and has kept her confined with her son in this room since then.

Jack’s mother, however, is able to conceive of a way to help Jack escape by pretending that he has died and this leads to their rescue from their prison. The rest of the novel follows Jack and his mother as they adjust to life on the outside, a life that Jack has never experienced.

Much like The Lovely Bones, Room deals with strong themes like the recovery from an intense trauma and the familial relationships stemming from that.

Before We Were Yours, Lisa Wingate

Lisa Wingate’s 2017 novel Before We Were Yours tells the compelling story of a dark part of American history through two storylines set decades apart.

The first storyline follows the life of a young girl Rill, who was living with her mother, father, and siblings on a riverboat in Tennesee. Through the events of the novel, Rill and her siblings are kidnapped by authorities working for Georgia Tann, who was known to run a black market child trafficking market in plain sight, where she ripped young children from their disenfranchised homes and essentially sold them to the wealthy and famous.

This novel exposed the horrors that children in the Tennesse Children’s Home Society were subjected to and follows a story about how victims of Tann’s child-trafficking ring had to piece together their lives in order to deal with the trauma of their upbringing.

Though not entirely the same, those who are looking for books like The Lovely Bones will likely enjoy the themes and story in Before We Were Yours.

Finding compelling and well-written books like The Lovely Bones can be difficult, but these eight titles will be sure to evoke the same emotions as Alice Sebald’s novel.

Are you searching for some books like The Lovely Bones? Any that didn’t make the list? Let us know in the comments! 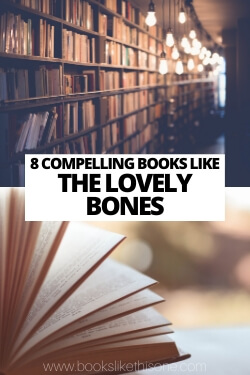