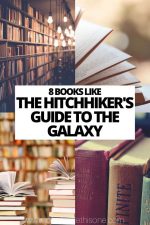 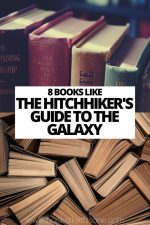 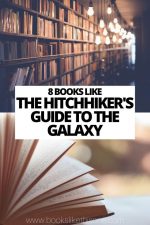 Douglas Adams’ 5 book trilogy has spawned a legion of fans and admirers. Yet there are many books like The Hitchhiker’s Guide to the Galaxy that are just as funny. If you have never read The Hitchhiker’s Guide to the Galaxy, then I strongly recommend you do so. Arthur Dent’s tale is eminently re-readable and still relevant to modern life. When looking for similar titles, do take a look at the list below.

The Eyre Affair, by Jasper Fforde

Books like The Hitchhiker’s Guide to the Galaxy remind you that life is funny. Published 2 years after Douglas Adams sadly died, The Eyre Affair is an excellent example of irreverent imagination.

In an alternate 1985, time travel is part of life, cloning is normal and literature is taken very seriously. So seriously in fact that there is a whole police department (SpecOps 27) dedicated to rooting out literary crime.

Our protagonist is Thursday Next, a literary detective with SpecOps 27. The literary detectives prevent criminals from kidnapping literary characters from novels. Amongst other crimes of course. When Jane Eyre is targeted by Thursday’s former University Professor (now arch-criminal and 3rd most wanted man on the planet), Thursday must use her Uncle Mycroft’s Prose Portal to enter Charlotte Bronte’s novel and save the day.

The Eyre Affair is the first in Fforde’s long-running Thursday Next series and is funny, poignant and an excellent reminder of just how great a good book can be for the soul.

To Say Nothing of the Dog, or How We Found the Bishop’s Bird Stump At Last, by Connie Willis

Comic Sci-Fi is often overlooked and books like The Hitchhiker’s Guide to the Galaxy can get lost amongst more serious titles. To Say Nothing of the Dog, is as funny and mischievous as it sounds.

Published back in 1997, the book follows Ned Henry, a time traveller currently studying Coventry Cathedral in 1940. Ned is looking for the Bishop’s bird stump, something that is never really defined by Willis making the tale even more hilarious. ‘Time lag’ (jet-lag but for, you know, time travel) happens frequently to Ned, leading our hero on an ever more confused journey to help the Lady Schrapnell rebuild Coventry Cathedral in the future.

So many things in this book will make a reader laugh (unless you’re dead or lost in time). Mismatched lovers, boat rides on the Thames and important cats and dogs are all part of Willis’ clever and funny story. If you’re looking for a laugh or 70, start here.

The next book like The Hitchhiker’s Guide to the Galaxy remains one of my favourite comic novels. Pratchett had introduced the character of Sam Vimes (Commander of the Ankh-Morpork City Watch), books earlier in Guards! Guards! Yet this title (along with Thud! Snuff and Jingo) is one that keeps making me smile.

Sam is zapped back in time whilst chasing a criminal and ends up encountering himself as a young plod on the beat. With little time to catch the culprit, Vimes has to change the course of a bloody revolution without altering history. On top of this he has to ensure his actions don’t prevent young Sam from becoming the man Vimes knows he is today… and possibly last week… time travel, eh?

Pratchett always had a gift at meshing comedy poignantly with drama and death. Night Watch is no exception. And Vimes is a character anyone who ever feels put upon can identify with.

Books like The Hitchhiker’s Guide to the Galaxy come in all shapes and sizes. Clovenhoof was recommended to me back in 2015 and I haven’t stopped laughing since. Fired for gross incompetence, Satan is banished to earth and forced to live amongst humans. In Birmingham, England.

Taking up the name of Jeremy Clovenhoof, Satan begins trying to live as humans do. Making friends (sort of) with his neighbours. Learning the joys of Findus crispy pancakes and discovering that Lambrinis are the best drinks ever. He also becomes overjoyed with the free money credit cards provide. All the while a takeover plot is brewing in Heaven, and Jeremy might have to wait a bit before he can hang up his pitchfork for good.

Clovenhoof has a rich cast of characters that see Satan as just another annoying neighbour with disgusting habits. Yet people can’t help but be drawn to him. The first in an ever-expanding and hilarious series of books, Clovenhoof delights, appals and snorts with laughter. Often at the same time. What more can you want from a book?

All Systems Red, by Martha Wells

A similar, yet slightly different title to The Hitchhiker’s Guide to the Galaxy is this gem from Martha Wells. The first of a series, All Systems Red follows a self-aware security android that hacked its own settings.

Dubbing itself ‘Murderbot’ (though it never says that out loud around humans) because it maybe-sort-of killed some people, the android just wants to be left alone. Murderbot is content to live apart and watch soap operas. Then something goes wrong to protect scientists on an alien world, and Murderbot becomes drawn to the humans.

Even if they’re nothing like the humans it watches on soap operas. This is unquestionably a superb novel. Funny, heartfelt and at times very tearful, All Systems Red captures the human condition perfectly. Soap operas and all.

The Martian, by Andy Weir

Books like The Hitchhiker’s Guide to the Galaxy often have a ‘fish-out-of-water’ style protagonist. The Martian is no exception. Mark Watney is left behind on Mars when his fellow crew assume he is killed in a storm. Alone, Watney decides not to give up.

Using the power of math (and poo), Watney endeavours to survive. At the same time he delivers his thoughts of life on Mars, often with hilarious results. When NASA discovers their presumed-dead astronaut is still alive, Watney becomes the centre of a huge rescue operation. Can they reach him in time?

The Martian has achieved an almost cult status. The film, starring Matt Damon and directed by Ridley Scott is good but doesn’t quite match the humour of the book. Weir was one of the first commercially successful self-published authors, achieving huge sales online before being picked up by a traditional publisher.

The story veers between drama and comedy, but it is the comedy that makes the drama work. Watney’s communications with NASA are particularly hilarious as they back and forth with text messages. Yet at the core of The Martian is a beating human heart that can’t help but win you over.

In 2019, a large % of the non-reading public was exposed to the comedic sensibilities and dark leanings of Terry Pratchett & Neil Gaiman. Good Omens is a book that feels like a Discworld novel but plays like a Neverwhere.

All the signs point to the impending apocalypse when the Anti-Christ is born. Bad news for Aziraphale (Angel and former guardian of the Eastern Gate of Eden) and Crowley (Demon and former serpent responsible for convincing Adam and Eve that apples were actually a really nice fruit).

Aziraphale and Crowley have grown rather fond of their life on earth, and don’t fancy the idea of it coming to an end. Cue one of the funniest team-ups in history as an Angel and Demon do their very best to avoid… well… angels and demons whilst saving the world from itself.

Neil Gaiman considered getting the TV series commissioned, filmed and distributed one of the best accomplishments of his life. His only regret is that Pratchett didn’t live long enough to see it. Both the show and the book are extremely well written and very funny. If you’re looking for books like The Hitchhiker’s Guide to the Galaxy, Good Omens will help scratch that itch.

Diana Wynne Jones was a YA and children’s author long before people knew what the term YA meant. Deep Secret was a companion book to The Merlin Conspiracy and showcased Jones’ wit and sense of humour. Written more for an adult audience, the characters are a joy to accompany and you can’t help but laugh out loud (especially if you’re an SFF fan).

Principally set at a science fiction convention, the plot revolves around Rupert Venables (incumbent Magid of our world) and Maree Mallory (potential Magid in training if she could just stand still and be less bloody annoying). Protecting our world from the multi-verse whilst trying to select a new ‘Magid-in-training’ is just one of the headaches Rupert must deal with. Science fiction attendees are the other. Especially when it’s hard to work out if that’s actually cosplay they’re wearing.

Filled with fun and laughs, Deep Secret offers a fascinatingly hilarious insight into the ‘convention’ mindset.

Are you a fan of Diana Wynne Jones? Check out our list of more books like Howl’s Moving Castle!

Books like The Hitchhiker’s Guide to the Galaxy are more numerous than you think. Anyone who says science fiction and fantasy can’t be funny would do well to read some of the titles above. Let us know what you think of our choices.

Are you looking for more books similar to The Hitchhiker’s Guide to the Galaxy? Have any recommendations that didn’t make the list? Let us know in the comments! 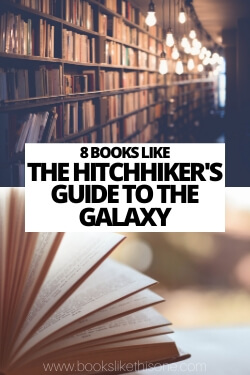