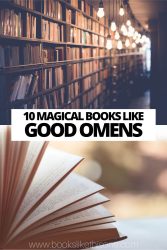 Books like Good Omens are humorous and filled with fun adventures and characters who you surprisingly care a lot about. The novel by Neil Gaiman and Terry Pratchett is loved by all ages and all types of people and it has even a television miniseries based upon it.

The Nice and Accurate Prophecies of Agnes Nutter are probably the only true predictions of the fate of the world and its inhabitants. Which is why when the Judgement Day aka. The end of the world is predicted, things are set in motion that cannot be stopped.

The four Bikers of the Apocalypse (War, Famine, Pollution and Death are gathering, the angles and demons of the world are gathering their armies and somehow, the Antichrist is missing.

One angel named Aziraphale and one demon named Crowley – two unlikely friends – may be the only two people in the world attempting to stop the apocalypse.

If you have read Good Omens already and find yourself with a void to fill, then why not try these other similar books I’ve found for you! Pick up one of these ten titles to find your next great read!

To find a book like Good Omens, the best place to start off this list is by looking at the other works of the authors of the novel themselves!

One standout book by the author Neil Gaiman is Stardust, which the famous movie of the same name is based on.

In Stardust, we meet a young man named Tristan Thorne who would do anything to win over the heart of a cold-hearted yet beautiful woman named Victoria.

When Tristan proclaims he would do anything for her, he finds himself on a journey to bring Victoria a star they both saw fall from the sky.

In order to collect Victoria’s gift, Tristan must venture over the wall that separates his small town from the unexplored lands beyond, where he finds nothing is what he thought it was. If you loved Good Omens then Stardust is the next best thing!

Much like Good Omens, Mort contains characters who personify things we know as certain in life such as Death, Pollution, War and Famine.

In the novel, we meet Mort who is greeted by Death and is given a chance to join Death as an apprentice. On his journey, Mort helps Death collect souls across the world.

Mort is warned, however, that every death is predetermined therefore to prevent a death from occurring and interfering with fate will cause devastating consequences.

So, when Mort begins to collect souls on his own, whilst Death galivants across the world and enjoying human experiences, things go wrong.

When Mort is meant to collect a soul of a princess, he accidentally kills the assassin who is meant to take her life creating an alternate reality. Now, he must make amends to right his wrongs.

This humorous, satirical book is the perfect read to add to your TBR!

In The Hobbit, we meet Bilbo Baggins who is just like any other hobbit – his home and the Shire is all he needs to be happy and comfortable in life. But when the wizard, Gandalf, turns up at his door with a dozen dwarves and is told he is the burglar they need to complete their company.

The company is on a quest to reclaim the dwarven home of Erebor, the Lonely Mountain which was taken by the dragon, Smaug.

Bilbo reluctantly accepts his position as burglar and is sent off on a mission where he gains friends and foes as well as a shiny ring that has more importance in Middle Earth than Bilbo could ever have imagined.

This classic is the perfect book similar to Good Omens for readers who haven’t read it already!

The first book in the His Dark Materials series, Northern Lights (published as The Golden Compass in the United States) is the perfect book for your next read after Good Omens.

A genre-defining fantasy novel beloved by many, in this book we meet Lyra and her daemon Pantalaimon.

Living at Jordan College, Oxford, Lyra witnesses the attempted poisoning of her uncle and finds out about mysterious particles named Dust. Shortly after, her best friend Roger is kidnapped by people named Gobblers.

When Lyra is adopted by a woman named Mrs Coulter, Lyra finds out through the use of a device that allows the user to know when someone is telling the truth that Mrs Coulter is the leader of the Gobblers.

Lyra is sent on a journey to find Roger and find out the trust about Dust and those with bad intentions with its use.

The Quiet at the End of the World, by Lauren James

When a virus leads to worldwide infertility, children and youngsters are hard to come by.

Lowrie and Shen are the youngest people left on Earth and live in a mansion where they are doted upon by the remaining community in a part of London and spend their days looking for pieces of history to decorate their home with.

But their life is torn apart when a secret is revealed that not only threatens the peace of their family but of humanity. Now, they must make an impossible choice.

The Quiet at the End of the World explores the difficult and ethical choice of life and death and is an entertaining dystopian read.

Dirk Gently’s Holistic Detective Agency is about Dirk Gently a man who investigates obscure cases that are based on the interconnectivity of all things.

His current case is that of a missing cat which unravels into a mysterious murder that he attempts to solve, all whilst saving humanity from extinction.

This time-travel detective novel is humorous and adventurous and its themes and characters are something I would recommend to fans of Good Omens!

The Letter for the King, by Tonke Dragt

In The Letter for the King, Tiruri has dreamed of becoming a knight since he was just a boy so he does what every knight has to do and waits in silent contemplation whilst locked in the chapel.

But when he hears a knock and a voice cry for help, his chivalry can’t stop him from opening the doors.

Given a letter for the King, Tirui must venture across the mountains to deliver the letter which the fate of the kingdoms lies upon. His journey takes him on highs and lows and he meets many people, but most importantly, he must keep his identity a secret.

A story about adventure and having the fate of the world within your hands, this book like Good Omens is great for those looking for their next read!

Harry Potter and the Philosopher’s Stone, by J.K. Rowling

Everyone knows the story of the boy who lived, but have you read it?

Nothing beats reading or re-reading the story of Harry Potter and the trials and tribulations he faces throughout his years at Hogwart’s School of Witchcraft and Wizardry.

Harry lives with his abusive Aunt and Uncle when he receives a letter inviting him to Hogwarts and soon after, he finds out that not only is he a wizard but his deceased parents were too, killed by the most powerful dark wizard in history who Harry somehow survived.

Starting his first year at the school, he makes friends and enemies and finds out that Voldemort’s plans are not quite over.

The Hazel Wood, by Melissa Albert

This fantasy novel tells the story of seventeen-year-old Alice who lives on the road with her mother.

Never staying in one place too long, this all changes when her grandmother (famous author of dark fairy tales) dies on her estate alone.

Her mother is then kidnapped by someone who says they are from the Hinterland, a cruel and supernatural place Alice thought only lived in her grandmother’s books and mind.

Her mother leaves one note: ‘Stay away from the Hazel Wood’. But in order to save her mother, she must do the one thing she was told not to.

The Hazel Wood is a story that takes the darkest parts of fairy tales and brings them to life, a story of good vs bad and walking the line between the two.

The Night Circus is a story set within Le Cirque de Reves, a circus that appears overnight and only opens when the sun has set.

Magic has no pity so the pair must navigate the game they were forced into and find a way to stay together and alive.

An interesting, more fantastical read for lovers of Good Omens, The Night Circus is both haunting and beautiful.

Books like Good Omens are full of characters and stories that can only thrive in our imaginations. The books above all tell a story about a world slightly different to our own where characters face difficult situations. I hope you found something for your next read!

Are you looking for more books similar to Good Omens? Have any recommendations that didn’t make the list? Let us know in the comments! 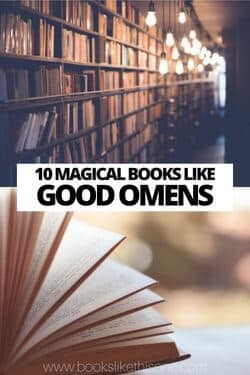