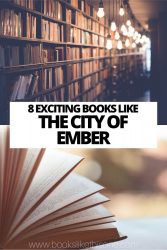 Are you searching for more books like The City of Ember?

Technically targeted towards children and young adults, The City of Ember series can be read by anyone at any age. The story of a girl living in an underground and entirely self-contained city created by the mysterious “Builders” is one that will appeal to anyone wanting to escape the real world right now.

In a way, this book is almost like another version of the Wool trilogy by Hugh Howey. If you’ve already read the series and are looking for other books like The City of Ember, some of the titles below might interest you.

Like The City of Ember, Wool is the story of an underground community, but unlike Ember they live in a silo. A huge concrete city that goes down for hundreds of levels. No one can go outside, unless you are sent to clean.

Cleaning is a death sentence and is used by the mayor as punishment for crimes committed within the silo. The story follows Holsten, and eventually Jules as they begin to wonder if all they are told about the outside is true.

Originally written as a short story, Wool has spawned 5 books and a TV series due to air in 2022. Well worth a read if you enjoyed The City of Ember.

Some books like The City of Ember surprise you in their setting and format. Holes weaves together past, present and ancient history as young Stanley Yelnats is tried and convicted of a crime he didn’t commit.

Sent to a boys’ detention centre at Camp Green Lake, he joins the other boys who spend all day, every day, digging holes exactly five feet wide and five feet deep. The lake has long since dried up, but there’s plenty of holes and the warden of the centre is looking for something buried underneath.

Cleverly, Holes shows kids that you don’t always get rewarded for doing the right things. Life can be hard and cruel, as well as magical. The important thing is learning to make the right choices amidst all of the challenges.

Holes is a great read for anyone (adult or child) who enjoyed The City of Ember.

Out of my Mind, by Sharon M. Draper

Moving a little off the fantasy track comes Out of my Mind, a book like The City of Ember that takes place in a different underground city: the human mind.

Melody cannot walk. She cannot talk. But Melody does have a photographic memory. She’s smarter than most adults and most of her classmates who dismiss her as mentally challenged because she cannot respond in a way they understand.

Yet, Melody is determined not to be defined by her cerebral palsy, and she’s going to find a way to let everyone know it, no matter what. The joy of this read is in learning more about what Melody is thinking as she narrates her story.

The part where she talks about how she can do anything she likes in her dreams is superb and is relatable to any kid who lives with a mental health condition. This is a great story.

Bridge to Terabithia, by Katherine Paterson

Grief, trauma, and magic are all part of growing up. Many books like The City of Ember deal with these subjects well and Bridge to Terabithia is one of them.

The story follows Jess Aarons who has been practicing all summer to be the fastest runner in the fifth grade. When new girl, Leslie Burke outpaces him the two become friends and spend a lot of time behind Leslie’s house exploring their made-up magical world of Terabithia.

It’s when Leslie goes to Terabithia without Jess one morning that something bad happens. Jess is left reeling and has to rely on the courage Leslie has given him to deal with his grief.

There are parts of Bridge to Terabithia that might make you cry. There are parts that make your heart sing too. As Jess learns to manage his grief and trauma, the magic of his imagination bleeds through to the reader. Read it now.

The Voice in my Head, by Dana L. Davis

Faith, magic, and life combine in Davis’s follow up to Tiffany Sly Lives Here Now. Books like The City of Ember throw readers headlong into a maze of confusion, tragedy, and enchantment, and The Voice in my Head is no different.

Indigo is trying to come to terms with a decision her twin sister Violet has made. Violet is terminally ill and in just a few hours, plans on ending her own life on her own terms. Indigo doesn’t know how to face life without her sister, until she starts hearing a mysterious voice in her head claiming to be God.

The voice instructs Indigo to take Violet to a remote rock formation in the Arizona desert because if she does, Violet will live.

The Voice in my Head has garnered mixed reactions from readers. It’s left up to the reader to decide whether you think the voice in Indigo’s head is just an auditory hallucination brought on by trauma, or if the voice is something else entirely.

I think that’s a good way to encourage readers to think about faith and mental health whilst leaving enough room for you to explore your own feelings and beliefs.

Children of Blood and Bone, by Tomi Adeyemi

Flinging us headlong back into the realm of fantasy, comes Children of Blood and Bone.

Zélie Adebola has been left without a mother and with people who have no hope thanks to a ruthless king who ordered all maji killed. Magic has disappeared but Zélie has the chance to bring it back and take vengeance on the king and monarchy.

This is a really engaging book that riffs on Nigerian mythology, the Yoruba people and star-crossed love. Yes, it is told very much in the vein of a lot of epic fantasy novels.

Grand vistas, sweeping statements, melodramatic encounters, but that is where the strength lies. If epic fantasy is not to your taste, then you might not enjoy this. But if like me, you enjoy running away into a magical world with epic stakes and vibrant settings, then this book is for you.

Already read this book? Check out our list of more books like Children of Blood and Bone!

Boarding school books often fill me with a rising dread. Harry Potter has glorified boarding school life, and there have been so many copycats over the years.

The Yam Po Club is very different, though.

For a start, it’s a book about boarding school that kept me reading. This is in large part due to the lived experience feeling you get from the narrator. Books like The City of Ember deal with painful rites of passage and memories that stay with you long after you’ve moved on. The Yam Po Club showcases this well.

Leaving home and going to a boarding school is daunting and exciting for Onyebuchi. The all-girls secondary in Enugu is where she meets what turn out to be her life-long friends, Funke and Nnenna, girls who, like Onyebuchi, feel very much the outsiders.

A coming-of-age story that showcases what boarding school is actually like away from the fictional halls of Hogwarts. Charming, painful, funny and sad.

The Girl of Ink & Stars, by Kiran Millwood Hargrave

The Girl of Ink & Stars won the Waterstones Children’s Book Prize in 2017 and despite my avoidance of award-winning novels (my tastes are usually the opposite of awards judges), I can see why.

When Isabella’s closest friend disappears from the island they both live on and are forbidden to leave, Isabella volunteers to lead the search into the Forgotten Territories. Secretly Isabella is also hoping to find her long-lost father along the way. But life outside the island is filled with monsters and a fire demon is beginning to wake up.

The maps, the characters, the magic, the monsters… all are handled extremely well by Hargrave and if you liked The City of Ember, you will love this.

Books like The City of Ember, are filled with magic, terror and adventure. Any of the above titles will help you find something you enjoyed about Ember.

Are you looking for more books similiar to The City of Ember? Have any recommendations that didn’t make the list? Let us know in the comments! 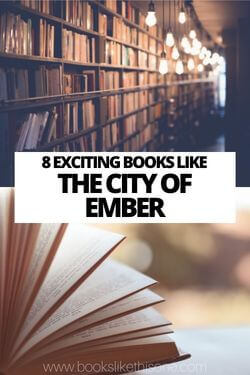