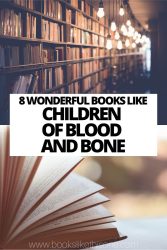 When I was younger books like Children of Blood and Bone introduced me to reading. Magical tales steeped in mysticism and cultures so unlike the one I grew up in. They were like a gateway drug into reading.

Now that I’m older (and hopefully wiser), I still love books similar to Children of Blood and Bone. Nigerian mythology, the Yoruba belief and more are all twined around Zélie as she struggles to bring magic back to her world after a cruel king does his best to eliminate anyone who practices… including Zélie’s mother.

This is a tale packed with danger, star-crossed romance, oppression and the horrors of racism and misogyny. If you’ve already read the first book in Adeyemi’s saga though, what others are out there?

The Jasmine Throne, by Tasha Suri

Never underestimate younger readers. Books like Children of Blood and Bone come in all forms, and whilst The Jasmine Throne is marketed for an adult audience, younger readers will love it too. Malini has been imprisoned by her dictator brother.

With only a few maidservants who visit to clean every night, Malini is alone. But when she witnesses the true nature of a maid called Priya, their paths become intertwined.

And a quest for vengeance begins. There are over half a dozen points of view to follow in this character-led story, but Suri succeeds where some authors fail, making you care about each person in different ways.

If you love morally grey queer fantasy, you will devour this novel. Suri writes with a confidence that is intoxicating. This is a true page turner set against a backdrop of Indian mythology and culture.

Beasts Made of Night, by Tochi Onyebuchi

Imagine being able to throw away all the bad things you’ve done and have them manifest as beasts. Now imagine being someone who can take on your sins by killing those beasts, a process that can drive you insane.

That is the premise behind Beasts Made of Night. And what a premise it is!

Books like Children of Blood and Bone enjoy torturing their main characters, and poor Taj is put through the wringer in Onyebuchi’s novel. As an Aki (a sin-eater), Taj is paid to take away sins. But when he consumes the sin of a member of the royal family, things get quickly out of control.

Read this if you like interesting twists on magic influenced by Nigerian culture.

Forest of a Thousand Lanterns, by Julie C. Dao

Would you choose power over love? This age-old conceit lies at the centre of Dao’s novel inspired by East Asian culture and mysticism. Books like Children of Blood and Bone often present their protagonists with terrible choices and this is no different.

Xifeng is a peasant living in a village no one knows of. Her Aunt Guma has told Xifeng that she can rise to be Empress of Feng Lu, but to do so would be to turn her back on love, and exploit the magic that runs in her veins; primarily by eating the hearts of people recently killed.

If you don’t like anti-hero stories, you probably won’t like Forest of a Thousand Lanterns. But if like me, you love a story where the protagonist is the opposite of ‘yet-another irritating-do-gooder’, you will enjoy this book.

There are many books similar to Children of Blood and Bone that draw on the bloody history of humanity as inspiration. An Ember in the Ashes draws on the brutally civilized world of ancient Rome as its inspiration.

Elias is a soldier and Laia is a slave, yet both feel trapped. When her brother is imprisoned, Laia agrees to enter the military academy to spy for rebels who promise to rescue him. There she encounters Elias, a soldier who hates the tyranny of the Martial Empire he is a part of.

If you like big sweeping epics that make you angry and sad, joyful and outraged, then An Ember in the Ashes is for you.

Flame in the Mist, by Renee Ahdieh

I was lucky enough to travel around large parts of South East Asia in 2019 (pre-Covid). My final two weeks were spent in Japan, a country I dearly want to visit again. Books like Children of Blood and Bone cloak their cultural influences in fantasy and legend.

Flame in the Mist blends magic with historical fiction, introducing us to Mariko, the daughter of a prominent samurai as she quests for vengeance against the bandits who attacked her clan. Disguising herself as a boy, you can’t help but fall in love with Mariko as she journeys and twists her way towards an ever-changing goal.

Bloodshed, love, secrets, blood-sucking trees, forest spirits, betrayal and counter-betrayal await if you choose to follow Mariko on her quest.

The Reader, by Traci Chee

A world without reading or books sounds like a nightmare where the NAZIs won the second world war. In The Reader, we are introduced to Sefi, and the world of Kelanna where books and reading just aren’t a thing. Or are they?

Sefi and her aunt Nin have been on the run ever since Sefi’s father was murdered and they spend their time hunting and thieving. Things take an interesting turn after Nin is kidnapped and the only clue Sefi has is the odd rectangular object her father left behind before he died.

If you enjoyed Children of Blood and Bone, add this one to your list.

Skin of the Sea, by Natasha Bowen

Mermaids vs. Gods. It’s easy to imagine this as the elevator pitch for Skin of the Sea, a tale steeped in salt, legendary creatures and vengeful deities. Simi serves the Gods as a mermaid, collecting the souls of everyone who dies at sea. Things go pear-shaped when she saves the life of a living boy thrown from his ship.

To protect the other Mami-Wata (mermaids), Semi has to find the Supreme Creator all whilst keeping a shadow that’s trailing her and the boy she rescued off her back.

Skin of the Sea celebrates all the positive and uplifting aspects of Black African culture and history during awful times. Not only is it a thrilling adventure in its own right, it is also an encouraging sign of the future of publishing, I hope.

The Hunger, by Alma Katsu

History and fantasy blend again in this disaster-on-wagon-wheels tale of the American West. I’ve enjoyed much of Stephen King’s work, so was intrigued to see his endorsement on the front cover of The Hunger.

Whilst it starts slow, you soon become pulled into the Donner party, especially when the supernatural elements reveal themselves. Drawing on the historical tragedies of this wagon train (bad snow, starvation, general deprivation, failing mental and physical health), Katsu uses the supernatural to truly terrify the reader. Is there something sinister in the dark? Or is it all in the character’s heads?

If you enjoy the creepier psychological elements in books like Children of Blood and Bone, you will eat your way through this novel.

Books like Children of Blood and Bone offer magic, romance, horror, tragedy, betrayals, and adventure. If you enjoy any or all of these story-telling elements, then the books above will have something for you.

Are you looking for more books similar to Children of Blood and Bone? Have any recommendations that didn’t make the list? Let us know in the comments! 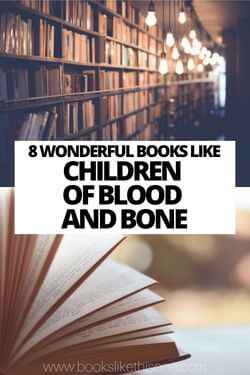