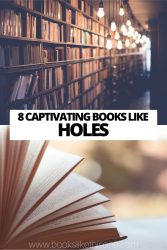 Are you looking for books like Holes by Louis Sachar?

It is hard to make an impression in a crowded children’s and young adult market. Yet Holes made a huge impact on adults and children alike when it was first published in 1998.

Wrongly accused of a crime he didn’t commit, young Stanley Yelnats thinks he’s cursed. Sent to the Camp Green Lake boy’s detention centre, Stanley is forced to spend every day digging holes that are exactly five feet wide and five feet deep along with the other inmates.

Holes and other books like it, teach children that life is not like a novel. You don’t always get rewarded for good behaviour and you don’t always make the right choice. Life is about dealing with adversity, coping with failure and learning from it. Holes explores these themes admirably.

But if you’ve already followed Stanley on his journey, what other books like Holes can you read…

Remember Armpit from Holes? Well, Louis Sachar did because he wrote this companion piece to his acclaimed novel.

Small Steps is set two years after Armpit has been released from Camp Green Lake, the young man is desperate to stay clean and has even set himself some goals to help him achieve this:

Books like Holes work because they don’t coddle their readers. Armpit is trying desperately to remain on the straight and narrow, but Sachar interweaves all the challenges that life throws at us into Armpit’s struggles.

The Silence of Murder, by Dandi Daley Mackall

Anyone who knows anything about neurodiversity will relate to The Silence of Murder. Books similiar to Holes are less concerned with magic and focus more on the realities of life’s challenges.

This is the story of Hope Long and her brother Jeremy. Jeremy has been accused of killing their town’s beloved baseball coach. Yet, Jeremy hasn’t spoken for 9 years, collects empty jars and does other things that make him an easy scapegoat for people to fixate on.

Even his lawyer thinks the best defence strategy is to convince the jury that Jeremy is not guilty by way of insanity. Hope has other ideas and is determined to prove Jeremy’s innocence. Trouble is, she’s also terrified at who the real killer is, and why they’ve framed Jeremy.

If you know nothing about neurodiversity and how horribly easy it can be to take advantage of anyone who is autistic, you should read this book.

Some books like to ask ‘what would you do?’ questions. What would you do if a bag of money dropped into your lap? Would you return it or would you spend the money knowing you only had a few weeks to do so?

Damian and Anthony are two brothers who have just had £1,000,000 drop literally into their hands from the sky. The money also has an expiration date as England is about to join the Euro, so the £ is about to become worthless.

Together, Damian and Anthony must decide what to do, all whilst grieving for their dead mother and trying to stay ahead of the crooks who stole the money in the first place.

At heart, Millions examines the cruel reality of capitalist economics, how grief affects everyone in different ways, and the joy of being in a position to help people you couldn’t before.

Child prodigy? Or simply just a very bright little girl? In Matilda, Roald Dahl plays with both questions. Books similiar to Holes love pitting children against adversity and Matilda is made to endure some very harsh lessons.

Her parents are cruel, self-centred, and foolish. They don’t understand Matilda’s obsession with books. Her blank older brother is about as useful as a wet dishrag and her fearsome Headteacher, Miss Trunchbull is about as caring as a bulldozer running amok.

Matilda finds solace in her books along with small acts of revenge against her parents and the Trunchbull. Only Miss Honey, Matilda’s class teacher, seems to recognise Matilda’s intelligence and compassion.

But when the Trunchbull threatens Miss Honey – the only person Matilda feels truly understands her – our five-year-old hero must summon all her wits and immense ‘brain power’ to beat the Trunchbull and win the day.

Warm, funny, witty. Matilda has charmed generations of children and continues to do so, both on-page and in the incredible musical theatre production.

There is No Dog, by Meg Rosoff

What if God was a nineteen-year-old boy called Bob? That question alone got me reading. Books like Holes play with lots of different ideas, but none quite like this.

Bob got the job of God of Earth after his mum won it playing intergalactic poker. Bob initially relishes the challenge, creating the world in six days, except he doesn’t do the best job and soon finds the Earth a lot harder to build and manage than he thought.

And like a lot of sex-mad, irritable, and easily-distracted teenagers, Bob begins to lose interest in his project. Fortunately, Bob’s middle-management side-kick Mr. B takes the opportunity to sort things out and basically spend his time cleaning up after Bob.

Now, millennia have passed, and Mr. B is tired of Bob’s laziness, mess and general ingratitude. So, Mr. B resigns. Bob falls in love. And chaos ensues.

There are books that wear their heart comfortably on their sleeve. Stargirl is one of them. Any young adult who’s ever felt out of place in school, will find a lot to enjoy here.

Teenager Leo tries not to stand out at Mica High. He doesn’t want to be picked on or though to be ‘different’ in any way. He just wants to fit in. But then Stargirl Caraway bursts into his life. A girl who sticks out in every way that Leo doesn’t.

Stargirl wears kimonos, buckskin, 1920s clothes and more. She plays the ukulele and brings it to school proudly unafraid to display her personality and differences.

Students don’t know what to make of her at first, but Stargirl’s growing popularity soon brings its own challenges and Leo must confront what’s more important; fitting in, or being yourself?

Stargirl is a great read for any teen struggling to discover and get comfortable with their own identity.

Books like Holes like to hint at magic and sometimes bring it in with full force. Inkheart is such a fun read, that it’s impossible not to include it here.

Like The Eyre Affair, Inkheart plays with the idea of what would happen if characters in books were real and escaped from the pages of their books?

Meggie reads a lot. Her father, Mo, is a bookbinder so Meggie has always had access to books since she was tiny. One night, Mo reads aloud from a book called Inkheart and before Meggie knows what’s happening, an evil ruler escapes from the book and lands in their living room.

Now Meggie has to learn how to use the power of magic to save the world before it’s too late. Charming, imaginative and engaging, Inkheart should delight readers of Holes.

The BFG, by Roald Dhal

Humans versus Giants. But humans and a Big Friendly Giant? Roald Dhal’s classic endures to this day.

The tale of orphan Sophie, who after witnessing the BFG blowing good dreams into children’s windows, is snatched away to live with him in Giant country, continues to enthrall children and adults alike.

Sophie soon learns of the other ‘chiddler-eating’ Giants and why the BFG is trying to protect her. But it’s when she witnesses the blood-curdling disgusting child-snatching antics of the other giants that Sophie decides they need to be stopped. And the BFG agrees to help her.

The BFG will bring a smile to your heart at whatever age you happen to be at.

Books like Holes are witty, poignant and magical in different ways. Whether you’re a young teenager or a fifty-year-old adult, there will be something in this list for you.

Are you looking for more books similar to Holes? Have any recommendations that didn’t make the list? Let us know in the comments! 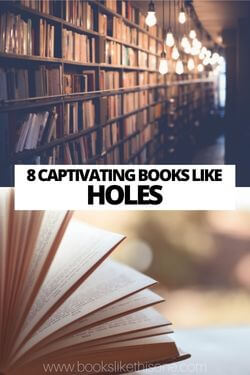