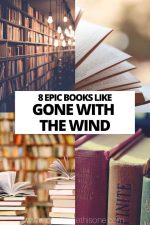 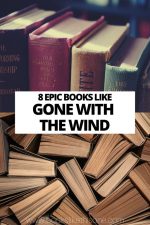 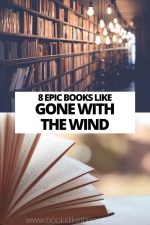 Margaret Mitchell’s 1936 epic novel Gone With the Wind was met with almost immediate success upon its publication and it continues in notoriety to this day. Though it is perhaps most famous for the 1939 film adaptation starring Vivien Leigh and Clark Gable, the novel still continues to transport its readers to Georgia plantations during the American Civil War and Reconstruction Era. Gone With the Wind certainly has some incredibly problematic elements, however, and it shamelessly glorifies the antebellum south and even paints organisations like the KKK as simple men’s “political” organisations. Because of these aspects, there is substantial debate about whether we should still be reading (and watching) Gone With the Wind at all. However, there are still many people who love the novel for its glimpse into a society lost and the harrowing journey of survival in a changing world and it has many people looking for books like Gone With the Wind.

Despite its numerous problems, Gone With the Wind still remains a pinnacle of American literature and cinema and it is a book that, despite its epic length, certainly wants you to read it. Somehow, it will get you rooting for one of literature’s most unsympathetic protagonists from one of America’s most shameful periods. Though there is a lot of controversy surrounding the novel, it is undeniable that Gone With the Wind is a masterpiece. If you’re looking for more epic novels that very clearly define the nostalgia and life of a time that has past, then take a look at these suggestions.

The Thorn Birds, by Colleen McCullough

Colleen McCullough’s 1977 novel The Thorn Birds is often hailed as the Australian Gone With the Wind and no list of book’s like Margaret Mitchell’s iconic novel would be complete without including it.

The Thorn Birds follow the Cleary family as they navigate their lives in the early 20th century (the novel spans from 1915 to 1969) in an Australian outback sheep station called Drogheda. The novel specifically follows protagonist Meghann “Meggie” Cleary from the time she is a young girl in New Zealand, to her family moving to work for a rich relative in Drogheda, Australia and following the trials and tribulations that life threw during that time in history.

The Thorn Birds remains the best-selling book in Australian history and has sold over 33 million copies since its publication. It was also adapted into an American TV mini-series in 1983 which still prevails as the second-highest-rated mini-series in United States TV history. The epic nature about the beginnings and endings of a small town and the people who live in it are reminiscent of Margaret Mitchell’s novel and The Thorn Birds is a great book to read if you’re looking for something similar to Gone With the Wind.

Published in 1976 (the year of America’s bicentennial), Alex Haley’s epic novel Roots: The Saga of an American Family is one of the most important works of American literature and an excellent choice if you’re looking for books like Gone With the Wind. Roots is especially important to read if you’re looking for an epic narrative similar to Margaret Mitchell’s novel that will take you away from the enormous whitewashing of history that is prevalent in Gone With the Wind.

Roots follows title character Kunta Kinte, an 18th-century teenager in the Gambia who is sold into slavery and taken to the United States. It also subsequently tells the story of seven generations of Kinta Kinte’s family as they navigate slavery and racial relations in the USA. The final bit of the book follows the last generation of Kunta Kinte’s line, author Alex Haley.

Roots is an important American epic to read, especially if you’re looking for books like Gone With the Wind. Where Mitchell’s novel glamourises slavery and perpetuates the trope of the faithful and devoted slave, Roots puts into perspective the actual realities of slavery in America and how the country to this day is dealing with systemic racism directly as a result from this.

Roots was adapted into a TV miniseries in 1977 and was (and still is) the highest-rated miniseries of all time.

East of Eden, by John Steinbeck

If you liked Gone With the Wind because of the themes of surviving as a family through numerous trials and tribulations, then John Steinbeck’s 1952 East of Eden is an excellent choice for you.

This epic novel, following two families living in the Salinas Valley in Central California, is considered to be Steinbeck’s magnum opus and is one of the greatest works of American literature. Set after World War One, East of Eden is more or less a modern retelling of the Book of Genesis, mostly concentrating on the story of Cain and Abel. It follows many similar themes to Gone With the Wind including fighting for survival and struggling to build a new life in changing times.

While the books are inherently different and East of Eden doesn’t contain the problematic elements of the Confederate lost cause mentality that is prevalent in Margaret Mitchell’s novel, there is no doubt that it is an excellent option for those looking for books like Gone With the Wind.

Published in 1929, William Faulkner’s The Sound and the Fury is considered to be one of the best English-language novels ever published and it is a particularly good choice for readers looking for books similar to Gone With the Wind.

The Sound and the Fury — a groundbreaking novel for its time — follows the Compson family. They are former aristocrats in Jackson, Mississippi who have fallen out of glory and into harder times. The novel, told in four distinct parts, follows them (mostly) throughout events taking place during the span of two days in April of 1928, except for one part that takes place on a day in 1910.

Though the scope of this novel is certainly much smaller than Gone With the Wind, it does follow similar themes, especially when it comes to the loss of Southern aristocracy and the decline of fortune.

F Scot Fitzgerald’s nominal 1925 novel The Great Gatsby may not be the first novel that springs to mind when thinking of books like Gone With the Wind, however, the two novels follow incredibly similar themes and do have a great focus on the cultural excess in American society (though set in wildly different time periods).

While Gone With the Wind is always looked at as a Civil War novel (though only a small portion of the book actually takes place during the Civil War), it is more of a story of survival, of excess, of building something of nothing, and an intense nostalgia of what is past. The Great Gatsby is about the exact same things — it also happens to be 80% shorter! They are also both known for having deeply selfish, self-serving, and unlikable protagonists despite both being lauded as literary greats.

So if you’re looking to read something like Gone With the Wind because you enjoyed exploring the themes it covers, The Great Gatsby might be one of the best choices!

Have you already read this? Then make sure to check out our list of books like The Great Gatsby!

If you liked Gone With the Wind because you like reading books set in the American South and liked the coming of age aspect of it, then Harper Lee’s classic work To Kill a Mockingbird is a great option for you.

Published in 1960, To Kill a Mockingbird is told through the eyes of 6-year-old Jean Louise “Scout” Finch as she observes her father, Atticus, defend a black man who has falsely accused of raping a white girl in their small Alabama town in the 1930s. The novel brings to attention such themes as a loss of innocence and coming of age, however, it also examines the fraught race relations, injustice, and systemic racism that has plagued the United States since before the era of Gone With the Wind.

Have you already read this? Then make sure to check out our list of books like To Kill a Mockingbird!

If you’re looking for books to read like Gone With the Wind and you haven’t spent the time to read any sort of slave narrative or depiction of what life was like for black Americans in the Antebellum south, then make sure that Kindred is your next choice.

With the revisionist history and apologetic Confederate lost cause mentality that Gone With the Wind is written in (especially with the way it depicts slavery and the KKK), it becomes especially important to read a book from another viewpoint in order to get a well-rounded idea of the horrors that occurred throughout the most shameful period of American history.

Octavia E Butler’s Kindred is a fascinating and compelling book that follows 26-year-old Dana, a young black woman living in 1976 Los Angeles until she is inexplicably called back in time to a Maryland plantation in 1815. Throughout the novel, Dana is called back and forth to the modern-day and has to come to grips with what slavery was actually like for her ancestors.

Though it is not comfortable to read, it is also an important piece of literature when it comes to understanding the culture and attitudes toward black people in the antebellum south — something that is not even touched upon in Gone With the Wind.

As stated in the entry above, if you’re looking for books like Gone With the Wind then it is incredibly important to read some narratives that tell the story of slavery from the other perspective. And one of the best novels to read about that is the late Toni Morrison’s 1987 novel, Beloved.

This novel follows the protagonist Sethe and her daughter Denver as they put a life together in Ohio after escaping from slavery. Sethe is repeatedly haunted by a ghost of who they believe is Sethe’s eldest daughter, who died when very young during the escape from slavery.

The novel is incredibly moving and haunting and adeptly examines not only fraught mother-daughter relationships and the modern ideals of masculinity, but it also studies the psychological effects of slavery. Again, though not an easy read, Beloved is one of the best novels to pick up if you’re looking for books like Gone With the Wind.

Finding great books like Gone With the Wind can be tricky, especially if you are looking to read something that examines slavery and the culture around it with more nuance than Margaret Mitchell’s titular work does. However, there are numerous books that follow similar themes and ideas to Gone With the Wind that are very much worth adding to your reading list.

Are you looking for books like Gone With the Wind? Do you have any additions? Let us know in the comments! 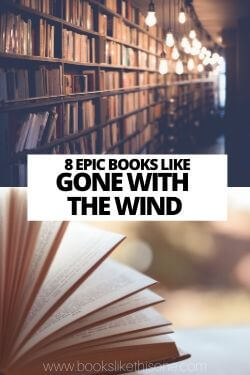