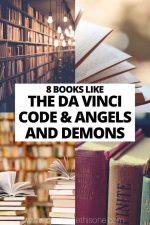 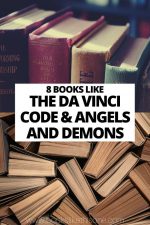 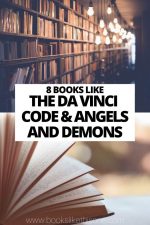 Being a great writer isn’t all about literary prose and correct punctuation – it’s the ability to tell a story and tell it well. This is the genius of Dan Brown.  Books like The Da Vinci Code and books like Angel and Demons take an extraordinary amount of research and Dan Brown prides himself on providing us with facts in his stories.

I remember reading The Da Vinci Code and learning fascinating stuff like your forearm is the same length as your foot. I checked – it’s true!

This author actually increased the tourism in Paris and especially the Louvre after The Da Vinci Code was released. How many authors have that as a legacy?

If you liked The Da Vinci Code or are looking for a book similar to Angel and Demons, I have an excellent selection for your next read.

8 Books like The Da Vinci Code and Angels and Demons

I chose to include Indisputable Proof in this books like The Da Vinci Code and Angels and Demons list because of the religious aspect of the story along with a helter-skelter ride to the pursuit of truth.

The story is ultimately about one of mankind’s most pondered questions – Is there life after death?

It begins in Spain when a sacred piece of cloth (the sudarium), believed to have covered Jesus’ face after his death on the crucifix, is stolen.

CIA operative, Samuel Tolen along with a Spanish inspector and a British archaeologist, Dr Jade Mollur, are given the task of returning the sudarium. Their assignment isn’t made any easier when someone begins killing in the same manner the Apostles were executed.

Indisputable Proof is similar to Angels and Demons and The Da Vinci Code as it too is a fast-paced journey through various exotic settings and integrated historical facts to keep the reader’s eyebrows raised.

Don’t try analysing this book – just enjoy the ride from Jacksonville and Costa Rica to our denouement in Egypt.

The Atlantis Code, by Charles Brokaw

This book takes the religion, ancient secrets and mature, attractive professor, as in The Da Vinci Code and sets them in a story about the lost city of Atlantis.

The plot follows professor of linguistics, Thomas Lourds, along with a Russian police officer, Natashya, and British journalist, Leslie Crane, in an archaeological version of a Rat Race to find the lost city of Atlantis.

Their opponents are a secret branch of the Catholic Church who believes Atlantis holds the secret of how man originated and they have no intention of letting such information fall into the ‘wrong hands’.

There is some romance in The Atlantis Code in the form of a love triangle, but don’t expect any x-rated scenes — Brokaw has kept the steamy stuff for the main story.

So, if you’re looking for novels like The Da Vinci Code and Angels and Demons but with some added sexual tension, then The Atlantis Code could well be your next purchase.

The Map of the Lost Memories, by Kim Fay

When looking for books similar to Angel and Demons and The Da Vinci Code, we are seeking mystery and adventure. The Map of the Lost Memories differs slightly in that the story is not only set in 1925 but the main characters are women. Fay still provides mystery, adventure and the satisfaction of feeling like you have learned something by the end.

Our main character, Irene Blum, an expert in the Khmer Empire, is distraught when she is overlooked for the position of museum curator because she’s a woman. She embarks on a journey which begins when a friend of her late father presents her with clues to search for the copper scrolls, believed to contain the lost history of the Khmer civilisation.

She engages the help of Simone, an archaeologist and treasure hunter, and they begin looking for the ancient temple in the Cambodian jungle. In this novel like The Da Vinci Code and Angel and Demons, there are many obstacles for the women to overcome and lots to discover; their biggest discovery being about themselves.

This story is not about a race to the end – it’s about the journey.

The Babylon Rite, by Tom Knox

One of the reasons why books like The Da Vinci Code are so popular is not only the factual fragments of history they unveil but the thrilling chase that takes us readers on a bumpy ride over more than one continent.

In The Babylon Rite, a Knights Templar historian commits suicide in the Rosslyn chapel. His daughter is determined to find out the truth about what happened.

She joins journalist, Adam Blackwood, and anthropologist, Jess Silverton, on a quest to find the secret that links her father’s death with several strange suicides in London, and the sacrificial rituals of the Moche people.

If you like Angels and Demons because of the ritual killings, The Babylon Rite is sure to ring your ‘gross’ bell. This story has gory deaths, drug cartels, kidnapping, suicides and ancient sacrificial rituals; all in one novel!

The Last Templar, by Raymond Khoury

Raymond Khoury originally began his career as a screenplay writer; he wrote Waking the Dead and BBC spy drama, Spooks; so if you’re a fan, you know what you’re getting in his debut novel, The Last Templar.

Obviously you can guess from the title that this book is similar to The Da Vinci Code and Angels and Demons in that it involves the Knights Templar. The tale begins in Acre, Jerusalem 1291 when a small band of knights set sail to escape an attack. On board, they have a chest, which has been entrusted to them by the Grand Master.

The story then moves to present-day New York where four men dressed as Knight Templar raid the Metropolitan Museum of Art and steal an ancient decoder.

This event is witnessed by archaeologist, Tess Chaykin, who teams up with an FBI agent in a cat and mouse pursuit across three continents for answers and maybe a treasure that could alter the human race.

The Armageddon Conspiracy, by Mike Hockney

If you love novels like The Da Vinci Code and Angels and Demons, you probably enjoy a rollicking good conspiracy theory. This one by Mike Hockney, a pen name for several authors, leads the reader on a quest to reveal the answer to the biggest biblical mystery: did God exist?

The Armageddon Conspiracy tells a thought-provoking tale and reveals factual details about the Illuminati, and King Solomon’s plan to reveal the answer to God’s existence.

There are twists and turns a-plenty to keep the reader compelled to the final outcome and similar to Angels and Demons and The Da Vinci Code will leave you thinking about the questions it raised long after you have finished reading.

The Grecian Manifesto, by Ernest Dempsey

Author Ernest Dempsey is a prolific writer of archaeological thrillers. If you are seeking more on ancient riddles and across-the-continent adventures in novels like Angel and Demons and The Da Vinci Code, read on.

In The Grecian Manifesto, Adriana Villa is searching for The Eye of Zeus, but as with all archaeological exploration, there are bad guys after the treasure too.

When she goes missing, Sean Wyatt, a former agent, and his faithful partner, Tommy Schultz, begin the search to bring her home. Their search is sanctioned by The President who is particularly interested in what Villa was seeking before she went off the grid.

This razor-sharp thriller is fuelled by flying bullets, ancient treasure and a touch of romance. Oh, and the search for a device which could cause the total collapse of the European (maybe the world’s) economy!

If you love a well-written adventure with lots of beautiful description, then pick up a copy of The Grecian Manifesto.

The Holy Blood and the Holy Grail, by Michael Baigent, Richard Leigh and Henry Lincoln

Last in this selection of books is the novel that apparently inspired Dan Brown’s The Da Vinci Code. Originally published in 1982, The Holy Blood and the Holy Grail plot hypothesises that Jesus married Mary Magdalene had several children who later moved to France and that the Holy Grail was not a chalice but the womb of Mary Magdalene and the royal bloodline she produced.

This is a controversial detective story guided by our main character, Henry Lincoln, where the reader needs to stay alert.

If the threat of world collapse and the Knights Templar is why you enjoy books like The Da Vinci Code and Angels and Demons, then The Holy Blood and the Holy Grail will definitely float your biblical boat.

All of the authors in this list have not been afraid to tackle the big questions about faith, humanity and how our past could affect our future. So, if you are looking for books similar to The Da Vinci Code and Angel and Demons, this is a good place to start.

Are you looking for books like Angels & Demons or The Da Vinci Code? Have any suggestions that didn’t make the list? Let us know in the comments! 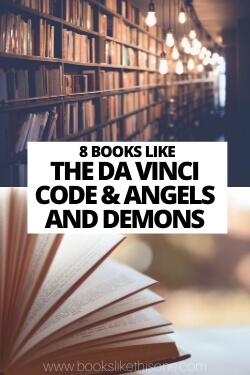