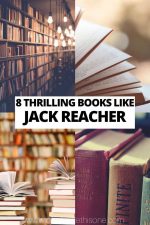 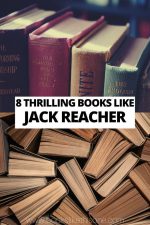 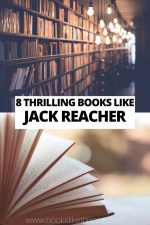 I wonder if Lee Child (real name Jim Grant) ever realised how many books he would write when he first created the character Jack Reacher. Two of the books One Shot and No Way Back have been adapted for film where there was much controversy over the 5’8” Tom Cruise playing the role. Personally, I thought he made up for his lack of height by being awesome! For this selection of books like Jack Reacher, it felt more appropriate to use the character name rather than randomly select one of the 24 books in the series. If you don’t know who he is then read on . . .

Jack Reacher is 6’5” and built like the proverbial outhouse. He is a former major in the United States Army Military Police Corps and when trouble finds him, he doesn’t mind being part of the solution.

A nomad who takes odd jobs where he can get them, Reacher’s travels have taken him from Paris and New York to the quiet towns of the American Midwest. He’s the sort of man men should be afraid of and women swoon over.

If you have devoured the entire series and are searching for more books similar to Jack Reacher by Lee Child, then I have a thrilling selection for you.

Andy McNab is the author of the number one bestseller, Bravo Two Zero. Remote Control is the first in the Nick Stone series by this author.

When one of his missions as an SAS trooper goes awry, his regiment cut Stone loose but he is soon approached by British Intelligence who require his services. Whilst on a mission, Stone decides to visit an old friend and colleague, Kevin Brown.

Suburbia isn’t quite what he was expecting: the whole family have been brutally murdered except for the seven-year-old daughter. Stone takes the girl with him but they are being followed. This sets off a chase from Washington to London. He wants to protect the girl, but he may have to use her to get the answers he needs.

As an ex-SAS soldier for seventeen years, McNab’s books are hailed as being so close to the truth they have to be vetted by the Ministry of Defence. This is a fast-paced exhilarating thriller that will leave you sweating. If you enjoy books like Jack Reacher, then Remote Control should press your thrill-seeker button.

A Brewing Storm, by Richard Castle

For any fans of the television series Castle, you’ll know that Richard Castle is a novelist who follows NYPD detective Kate Beckett gathering ideas and research for his books. In the beginning of the series his books are about an ex-CIA agent, Derrick Storm.

The series was so popular, someone had the excellent idea to actually write those fictitious novels and A Brewing Storm is the first in the Derrick Storm trilogy. The ghost author is screenwriter, Tom Straw.

In this book like Jack Reacher, Storm – who faked his own death so he could retire from the CIA – is taken out of retirement by his old boss and teamed with FBI agent April Showers ( yes, really) to find the people responsible for kidnapping the stepson of a US senator.

This book has a James Bond, Jack Reacher vibe that takes our hero on a twisted journey involving old flames, political agenda and puzzling ransom notes.

This book is similar to Jack Reacher with a little of Jason Bourne thrown in. Our protagonist is John Frisk, a soldier who was discharged after experiencing an IED attack. Angry and disillusioned he carries out an unforgivable act on the US and is sent to Guantanamo Bay.

Whilst doing his time in Gitmo he is recruited by Eric Wise, an ex-Delta Force Operator now working for the office of Threat Management and running Project Strike Force. Frisks genes are manipulated and his memories erased and replaced. He is turned into a super-soldier.

Wise has to deal with his own demons during the process but the ultimate aim is to ensure Frisk doesn’t remember his past and to stop the next terrorist threat to the US.

This is a nail-biter of a book that will keep you up to the wee hours frantically turning pages. So, if you are still looking for novels like Jack Reacher then Project Strike Force should be in your checkout basket.

A Dangerous Man, by Robert Crais

Robert Crais used to write scripts for some excellent television series like Hill Street Blues and Miami Vice. He also wrote the novel Hostage which was adapted to a movie where Bruce Willis played the lead.

This novel is number 18 in the Elvis Cole and Joe Pike series. A Dangerous Man begins when Joe Pike is on his way to the bank and sees one of the tellers, Isabel, being pushed into a car. Being a book similar to Jack Reacher, Pike gives chase and gets the girl back and the men are arrested.

If this sounds like a really short, slightly boring book, read on . . .

Once released, the kidnappers are found murdered and Isobel is missing once again. Is she in danger or to be considered a suspect?

Even though Pike himself is being considered a suspect, he engages the help of Elvis Cole to help find Isobel and the truth about what happened.

If you enjoy books like Jack Reacher, you’ll enjoy the gung-ho exploits of Joe Pike and Elvis Cole in A Dangerous Man.

Hard Road, by J B Turner

This razor-sharp thriller is the first in the Jon Reznick series. Reznick works for the US government as a ‘ghost’ operative and in Hard Road, he is assigned to perform a hit on a target and make it look like he committed suicide.

The ‘hit’ is a high-level security risk but when Reznick comes to do his job, he realises that everything isn’t as it appears. He takes the guy with him which sparks off car chases and Reznick’s daughter being captured to be used as ‘bait and bargain’.

At this point, in comes Assistant Director Martha Meyerstein from the FBI whose job it is to bring in Reznick and his travel companion – even though she isn’t exactly sure who the bad guys are any more.

If you enjoyed Jack Reacher and prefer your thrillers hard-boiled, then look no further than Hard Road for your next book.

How a Gunman Says Goodbye, by Malcolm Mackay

You can guess from the title that the action man in this book like Jack Reacher is a gunman for hire. This is the second book in the Glasgow Trilogy; the first being: The Necessary Death of Lewis Winter.

How a Gunman Says Goodbye is set in the criminal underworld of Glasgow, the story follows Frank MacLeod who is no newbie to the job and is determined to prove he’s still the best gunman around. During his last job something goes wrong and he has to be rescued by the younger, fitter version of himself which is hard for Frank to take.

This is a gritty crime thriller about being the best at what you do regardless of age. If you prefer the staccato narration in novels like Jack Reacher, then I think you’ll enjoy the writing style of Malcolm Mackay.

No Man’s Land, by David Baldacci

This novel is the 4th in the John Puller series. John Puller is a former Ranger now working for the Criminal Investigation Division of the Army and in this book he has to dig through his own memories when he investigates why his mother, Jackie, went missing thirty years ago.

The plot is written from two narrative viewpoints: Puller and former military and ex-con, Paul Rogers. It begins when an old friend of Puller’s mother writes a letter on her deathbed declaring that John Puller senior – a well-decorated, well-respected military man now suffering from dementia – was responsible for Jackie’s disappearance.

In this book like Jack Reacher, we follow each of their stories to Forte Monroe where something terrible involving Paul Rogers happened on the same night Jackie Puller disappeared.

Was there some sort of conspiracy by the military or government which drove the events of that night? You’ll be wondering until the very end and if you want to find out then grab your copy of No Man’s Land or listen on audio as I did whilst painting the staircase!

The Bourne Identity, by Robert Ludlum

This is probably one of those occasions where you’ve seen the film and now want to read the book. First published in 1980, The Bourne Identity, is an edge-of-your-seat thriller that will have you questioning the morality of military experiments.

We first meet Jason Bourne when he is pulled out of the sea after a gun battle in the Mediterranean. He has no memory of who he is or how he ended up in the sea. His only clue is a tiny film negative which has been implanted in his hip. The information on it gives him access to a bank in Zurich.

He finds out he has a large amount of money in his account and his name is Jason Charles Bourne. A situation at the bank and hotel leads Bourne to taking hotel guest, Canadian economist, Marie St. Jacques, as a hostage. Circumstances change their relationship when Bourne saves her life. She decides to help him and they follow clues to Paris and New York in the hope of finding out who he is and why people are chasing him.

So there we have it, 8 thrilling books for your wish list. Honestly, there were so many excellent novels like Jack Reacher that this list could have filled an entire toilet roll!

Are you looking for more books like Jack Reacher? Have any recommendations that didn’t make the list? Let us know in the comments! 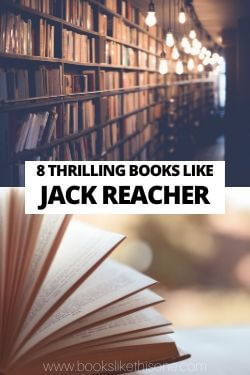