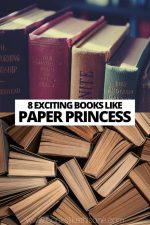 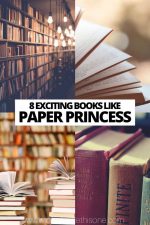 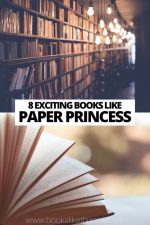 On the hunt for more books like Paper Princess? Well, you’re not alone.

Paper Princess is part of The Royals series by Erin Watt and quoted as ‘This generation’s Cruel Intentions. There is steamy stuff amid the pages of this innocently titled novel. This story about poverty, prejudice and privilege is definitely more for the older teens or those of us adults who still think we are!

Ella Harper lives with her mother and is used to the hardships they face on a daily basis. Then her mother dies and, although a tough survivor, Ella is totally alone until Callum Royal takes her in.

Callum lives in a mansion with his three sons – none of whom want Ella living with them. Reed Royal is particularly keen to see her return to the slums and makes it abundantly clear. The boys have no respect for their father and less for Ella who is trying to deal with fitting in at high school and with a new family. As a stripper in her former life, she can handle most of what is thrown at her but is there a limit to her tolerance.

Over time, the passion between herself and Reed grows but passion can often be destructive.

If you love the fervour, fire and ice in this tale of wealth and excess, you will soon be searching for more books like Paper Princess.

It seems only fitting that after reading a book like Paper Princess, you’ll want to know if there was a happily ever after. I give you the second book in the series, Broken Prince. This is your ticket on the roller coaster ride of emotions that this book provides.

The story continues between the sassy Ella Harper and the arrogant Reed Royal who fell for Ella and then royally messed things up.

This book has a slightly darker feel than Paper Princess digging deeper into the lives of the Royals revealing more about how they came to be the broken family unit that Ella experiences – although Watt does include plenty of humour too.

If you don’t finish this novel like Paper Princess wide-eyed and glowing with sweat, you were probably speed-reading and missed some good bits – slow down and take it all in.

Stealing Cinderella, by A Zavarelli

I’m sticking with the fairytale plot in this book similar to Paper Princess. Stealing Cinderella is the re-telling of a classic but with a darker, sexier vibe. Read on  . . .

Ella’s mother dies (sounding familiar?) when she is young and her father moves them both from their home in France to England. He remarries a woman (Narcissa) who brings her two daughters into the family. All three dislike Ella on sight.

Things are made worse when Ella’s father is killed leaving her only outlet from her horrible home life the time she spends volunteering at the animal rescue farm. Unfortunately, the farm is in dire need of funds to survive and Ella attends a charity ball in order to meet Prince Thorsen to ask him for help.

Ella soon finds out Thor’s reputation as being despicable is true and he drugs and kidnaps her whilst visiting the farm.

Will this dominant and broken prince be able to resist falling for Ella? And is this Cinderella quite the ‘good girl’ we remember from the storybooks of our youth?

This is one fairytale I wouldn’t read to children as a bedtime story but if you’re seeking out books like to Paper Princess then Stealing Cinderella should be on your list.

This book by Elle Kennedy is more suggestive than overtly sexual. The Deal follows Hannah Wells and her crush on the college ‘bad boy’. The only way she can think of to get him to notice her is to make him jealous.

The captain of the hockey team is Garrett Graham. He’s confident and brash but he wants to play professional hockey more than anything but his academic scores need to improve if he is to stay on the team.

Hannah thinks Garrett is a misogynistic arrogant a-hole but she agrees to tutor him as he convinces her that pretending to be with him will improve her social standing. Although they initially have a healthy disdain for one another, the more time they spend together the closer they become.

This book similar to Paper Princess is a college romance that will have you swooning over the main characters.

Crash Into You, by Katie McGarry

When looking for books like Paper Princess, anything by Katie McGarry is worth a mention. Crash Into You is number three in the Pushing the Limits series.

Rachel Young and Isaiah Walker have one thing in common: cars – or more precisely – street racing.

Rachel is beautiful; a star pupil with wealthy parents and her own secrets. She loves to race her beloved Mustang along the back roads for fun. One night at a race she meets Isaiah; he’s covered in tattoos and comes from the wrong side of the tracks. One night things go wrong and Isaiah needs to step in to help Rachel.

Their relationship grows as they both try to deal with what’s happening. They come up against resistance from Rachel’s family but they need each other. All the obstacles and drama pale in comparison to the feelings growing between them.

So if you enjoyed Paper Princess and are need of more teenage angst and passion, then look no further than Crash Into You.

Travis Maddox is not the sort of guy you can bring home to meet your family: he has too many tattoos and he fights for money. All the girls at college are attracted to him except one.

Abby Abernathy lives a well-ordered ‘good’ life. She has few vices and wants to keep her dark past exactly where it is. Guys like Travis Maddox are not in her sightline – she’s not interested.

Travis is curious about Abby’s indifference towards him and decides to trick her by making a bet with her that she can’t refuse. The bet ensures she is in his life, this way he can convince her how cool he is. Abby takes the bet but she isn’t quite the amiable rival Travis was expecting.

If you are desperately seeking more novels like Paper Princess then give Beautiful Disaster room on your e-reader.

During adolescence, our hormones can dominate everything including our sense of morality. In my next book, Forbidden our lovers are normal teenagers in the throes of first love: Maya is an inexperienced sixteen-year-old with talent and a pretty face; Lochan is a good looking seventeen-year-old with a promising future. So what could be wrong with this perfect picture of first love?

Maya and Lochan are brother and sister.

Practically abandoned by their alcoholic mother and no sign of their father in their lives, Maya and Lochan take on the role of parents to their younger siblings. Lochan is socially inept – Maya is his best friend and confidant. Their whole world revolves around each other day after day eventually turning brotherly/sisterly affection into much more.

This book like Paper Princess is a tragic and powerful account of how the human heart will cling onto love where it can find it.

For my next selection, I have chosen Easy by Tammara Webber, a New York Times bestseller published in 2012. Webber’s books have been translated into twenty-five different languages.

Jacqueline follows her boyfriend when he goes off to college but just two months into her sophomore year, she finds herself single and wishing she had chosen to attend a music conservatory.

One day she is rescued from being sexually assaulted by Lucas. He is a reformed bad boy with secrets but he’s also given himself the position of Jacqueline’s protector.

The themes in this plot are interlinked with flashbacks, giving meat to the bones of the story as you progress through Jacqueline’s journey.

If you enjoy books like Paper Princess and are searching for more then I would recommend this heart-pounding novel for your collection.

The story centres on Lady Chatterley (Constance Reid) whose husband comes home from the war injured and unable to move from the waist down. He neglects her emotionally so she finds physical comfort in the married gamekeeper, Mellors, who works on her husband’s estate.

As their adulterous affair continues, Constance begins to realise that she needs a relationship that satisfies her body as well as her mind to be completely happy. A relationship her husband cannot provide.

Their affair results in Constance becoming pregnant; she and Mellors have to separate whilst they set about divorcing their spouses so they can eventually be together.

So Lawrence not only dared to push the barriers of propriety with an adulterous affair, sex scenes and swearing, he included pregnancy out of wedlock and divorce!

You won’t be surprised to hear that this book was banned in many countries and was the subject of an obscenity trial in the 1960s when the unexpurgated edition was published by Penguin Books. Man those were wild times!

There you have it; a list of steamy, heart-pounding romance novels like Paper Princess to engage your passion and question your sense of morality.

Are you searching for more books like Paper Princess? Have any suggestions that didn’t make the list? Let us know in the comments!