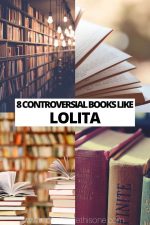 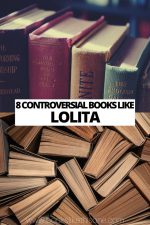 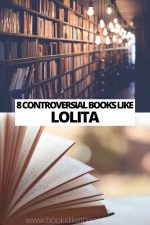 Initially censored, Vladimir Nabokov’s 1955 novel Lolita is now considered to be one of the greatest literary works of the twentieth century and has many readers search for more books like Lolita. A fictional memoir, written by a former lit professor using the pseudonym Humbert Humbert, he tells his story of infatuation and obsession with his teenage stepdaughter Dolores Haze whom he nicknames Lolita.

With the sudden death of Dolores’ mother, Humbert takes Lolita travelling across the country, desperately attempting to gain her interest by bribing her for sexual favours all while trying to keep their ‘relationship’ hidden, which of course was always going to end badly.

Coined by Nabokov as his favourite novel, Lolita truly is a piece of genius due to Nabokov’s portrayal of an unreliable wretch like Humbert and his talent with wordplay, use of puns, anagrams and double entendres which helps to soften the problematic subject matter.

The following list of books like Lolita has been compiled based on deceptive narratives, characters living by their own sets of rules and where the author has influenced those around them with their genius, despite being condemned for the story they’ve told. If you have marvelled at Lolita you are sure to applaud these too.

First on the list of books like Lolita is another novel which caused quite a stir with the author Brett Easton Ellis allegedly receiving death threats after American Psycho was published in 1991. The novel has been criticised for its gruelling depictions of violence, especially against women, and the potentially disturbing nature of the events in the book.

The story is told by another unreliable narrator in the form of Patrick Bateman, successful Manhattan businessman by day and a sadistic murderer by night. After his first kill, the reader sees Bateman’s killing tendencies spiral into savagely drawn-out sequences of torture. No one believes him when he recklessly confesses as his sanity starts to slip, leaving the reader to determine what is and maybe isn’t real.

The novel is set in the midst of the Wall Street boom in the 1980s and expertly compares the power-hungry, money-grabbing, tunnel vision of the American Elite with mental health problems which is what makes American Psycho one of the greatest books of our time.

Gustave Flaubert’s debut, Madame Bovary is considered his masterpiece, featuring the eponymous Emma Bovary who deceitfully lives beyond her means in a bid to escape the banalities of provincial life in Northern France.

Emma Bovary has an incredibly romantic outlook craving the excitement of high society, wealth and passion which results in a rocky journey down a road to debt and destruction with her poor husband, Charles Bovary tragically left to pick up the pieces.

The novel was attacked publicly for obscenity due to the depictions of adultery — which in 1856, the time of publication, was considered a scandal — which resulted in Flaubert being put on trial for his art.

Fortunately, he was acquitted and Flaubert’s Bovary has not only gone on to be a best-seller but also one of the most influential literary works in History, making Madame Bovary the perfect addition on this list of novels like Lolita.

A Clockwork Orange, by Anthony Burgess

Set in the near future, A Clockwork Orange is a dystopian black comedy, portraying a youthful subculture of extreme violence and barbarity.

Alex the teenage protagonist narrates, subjectively describing his violent and maniacal exploits and experiences with state authorities who are hard intent on his reform. Anthony Burgess’s 1962 classic is a story of free will, untouchability and the evils and oppression of the government which highlights the importance of both the good and bad sides of human nature.

The book was condemned for its descriptions of gang violence, delinquent behaviour and sadistic brutality but has since gone on to inspire many adaptations including multiple plays and theatre performances, but most recognisable is the 1971 film by Stanley Kubrick which came with its own wave of notoriety.

If you like Lolita because you enjoyed Humbert’s subjective realities, then you are sure to be riveted by Alex in A Clockwork Orange, too.

Breakfast at Tiffany’s, by Truman Capote

Also the basis for a well-known movie by the same name starring Audrey Hepburn, Breakfast at Tiffany’s is a tragic narrative describing a free spirit who both passionately craves, and resists a home.

An unnamed narrator tells the story of Holly Golightly, a country girl turned New York society girl who lives in the same building as them. She has no job and survives by entertaining wealthy men who give her money, expensive gifts and take her out to clubs and restaurants, the narrator soon becomes just as captivated by Golightly as her other suitors, as much for her frankness as her beauty.

Truman Capote describes Golightly as an ‘American Geisha’ and therefore not a prostitute, yet his character shattered conventions at the time by portraying a woman with such a strong sexual appetite and openly using men for money which was criticised at the time with objections being made to the language used and the subject matter.

Now immensely popular, Capotes original typed manuscript sold at auction in 2013 for upwards of $306,000, Breakfast at Tiffany’s is a great choice for anyone looking for books similar to Lolita.

Another classic novel and the basis of a well-known film by the same name, Chuck Palahniuk’s Fight Club is a psychologically charged, brilliantly unsettling, creepy and gut-wrenching story which makes a thrilling read for anyone looking for more books like Lolita.

Told in flashbacks and narrated by an unnamed, unreliable insomniac, we follow his story of underground bare-knuckle fighting since meeting Tyler Durden, a mysterious and charismatic soap salesman. Together they set up Fight Club and a series of rules to fight by including fighting without shirts and shoes and never talking about Fight Club which does little to stop the club getting out of hand leaving the reader to determine who and what is real.

Despite the backlash of criticism the novel faced upon publication in 1996 for the descriptions of extreme violence, Fight Club is an accurate depiction of repression and the unconscious mind taking over which is not only a subject hard to talk about but also one hard to tackle convincingly and coherently which Palahniuk does incredibly well.

Notes on a Scandal, by Zoe Heller

Notes on a Scandal is the closest portrayal of forbidden, predatory love to appear on this list of books like Lolita. In Zoe Heller’s 2003 novel we see a female teacher, Sheba Hart, take on this role, told from the point of view of an elderly, lonely History teacher, Barbara Covett, who works at the same school, this is a tale of intertwined scandals, jealousy and obsession.

Sheba turns out to be not your typical predator, falling victim to the advances of her fifteen-year-old student love interest and that of Covett who is determined to maintain their friendship no matter the cost.

Shortlisted for the Man Booker Prize in 2003 and turned into an academy award winning film starring Judi Dench and Cate Blanchett, Notes on a Scandal has succeeded despite the sensitivity surrounding the subject matter still apparent, even though it was published some 70 years after Nabokov tackled a similar subject. Heller’s novel is certainly worth your time if you are looking for a modern take on Lolita.

Heart of Darkness, by Joseph Conrad

Published in 1899, Heart of Darkness is Joseph Conrad’s most famous, most controversial and most influential work and a compelling read for anyone looking for more novels like Nabokov’s Lolita.

The narrator describes a night onboard a ship docked on the Thames where he meets Charles Marlowe who tells of his story journeying down the Belgian Congo on a quest to meet the elusive Kurtz, an ivory trader turned leader of a savage tribe. Conrad’s novel demonstrates there is little difference between apparent “civilised societies” and savagery.

Despite criticism for it’s deplorable and offensive content, Heart of Darkness has gone on to be an inspiration to many, including director Francis Ford Coppola who directed the 1979 popular motion picture Apocalypse Now and T. S. Eliot who appropriated Conrad’s famous line “Mistah Kurtz-he dead,” for his poem The Hollow Men in 1925. This demonstrates the importance of pushing boundaries with your subject matter like a lot of the authors on this list of books like Lolita.

Arundhati Roy’s debut novel The God of Small Things is a personal favourite of mine, it took the world by storm upon its publication in 1997, winning the Booker Prize and dividing opinion across the globe, since then it has been translated into 42 different languages and sold an estimated 6 million copies worldwide.

It has been praised for its elaborate plot and portrayal of particularly harrowing subject matter with masterful, poetic finesse, yet it has also been criticised for its uninhibited descriptions of sexuality and violence with a disregard to cultural contexts by Roy’s native India which resulted in her being taken to court.

The God of Small Things is a multi-faceted, complex novel demonstrating the effects of trauma on a family hell-bent on keeping up appearances, the loss of innocence in children and forbidden attraction defying the Love Laws which lay down who should be loved, and how, and how much.

If you like Lolita because of Nabokov’s clever uses of languages then you are sure to hypnotised by The God of Small Things, too.

Initially, it was hard to choose how to compile this list of books like Lolita because of the controversy and portrayal of a sexual predator but looking past this, the novel is a work of pure genius so I decided to compile a list based on authors who aren’t afraid to tackle subjects considered ‘taboo.’

This list shows some of the most controversial and influential books and contains some of the most prolific authors across the centuries, and the globe, which are sure to keep fans of Nabokov’s Lolita enthralled.

Are you looking for some books like Lolita? Do you have any recommendations that didn’t make the list? Let us know in the comments! 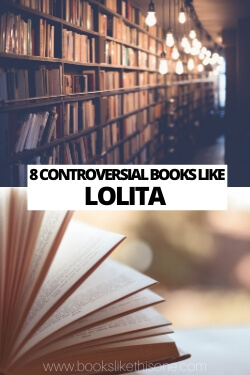