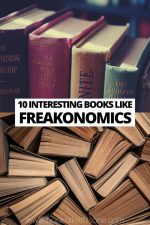 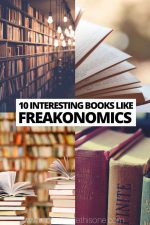 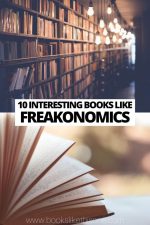 The best selling book Freakonomics: A Rogue Economist Explores the Hidden Side of Everything written by Steven D.Levitt and Stephen J. Dubner was a revelation when it was written. It took economic concepts considered boring and dull by most people and made it accessible to millions of people by applying these ideas to interesting issues such as drug dealing, baby names and cheating partners. Ever since I first read this groundbreaking book I have constantly been on the lookout for more books like Freakonomics.

Wondering what some of the best books like Freakanomics you should read after finishing Levitt’s & Dubner’s monumental work? These ten books which are similar to Freakonomics will be sure to hit the spot for what you’re after!

If you’re after more books like Freakonomics, you’d be happy to know that the success of Levitt’s and Dubner’s first book ensured they followed up a few years later with Superfreakonomics: Global Cooling, Patriotic Prostitutes and Why Suicide Bombers Should Buy Life Insurance.

Following essentially the same format to Freakonomics, Superfreakonomics explores a new set of issues by applying common economic theory to them. Dealing with topics such as prostitution, sex changes and terrorism, Superfreakonomics is a thoroughly enjoyable read and stacks up well against the original.

If you still can’t get enough of Levitt’s and Dubner’s work, then make sure to also check out Think Like a Freak: Secrets of the Rogue Economist which explores in more detail about how they go about their economic work to develop books like Freakonomics and Superfreakonomics.

Outliers: The Story of Success by Malcolm Gladwell is written in a similar style to Freakonomics and aims to explore what causes high achievers in various industries to excel over their peers. Is it simply a matter of luck?

Or is there a scientific explanation that can explain why successful individuals like Bill Gates or phenomenal rock bands like the Beatles achieved what they did.

Outliers is a fantastic book to read if you’re after more books like Freakonomics because you enjoyed the logic and reasoning that is common throughout Levitt’s and Dubner’s work.

Thinking Fast and Slow by Daniel Kahneman delves deep into his Nobel Prize-winning work, exploring how the human mind works and what biases exist in people’s minds when making decisions. In particular, there is a deep focus on why humans make certain decisions when rational logic might suggest otherwise.

I highly recommend Thinking Fast and Slow for people that after more books similar to Freakonomics who enjoy understanding in more detail different economic and psychological principles and how they relate to day to day life.

The Undercover Economist by Tim Harford

The Undercover Economist by Tim Harford is perhaps the book that is most similar to Freakonomics on this list.

Just like Freakonomics, it focuses on taking interesting topics and applying economic theories to them in order to explain why certain things occur. Harford explores topics such as health care, the price of coffee at Starbucks and high rents in large cities which introduces readers to basic economic principles.

If you’re purely after a book that brings more issues to light using economics in a similar style to Freakonomics then The Undercover Economist is undoubtedly a great choice for you.

Predictably Irrational: The Hidden Forces That Shape Our Decisions by Dan Ariely delves deep into the world of behavioural economics.

Drawing some parallels to Thinking Fast and Slow, this book explores why humans make certain decisions despite them being irrational. He breaks out his work into a number of core principles such as the impact of something being free, procrastination and emotions in decision making.

Predictably Irrational is a fantastic book to read if you want to gain further insight into why we make certain decisions even when we claim to be logical and rational people!

Fooled by Randomness: The Hidden Role of Chance in Life and in the Markets by Nassim Nicholas Taleb explores the world of randomness and how humans can often fall into the trap of attributing random factors to good decision making or their own work.

Originally published in 2005, this book became particularly relevant in 2008 during the Global Financial Crisis where rising markets prior to the crash gave traders a feeling of invisibility.

Fooled by Randomness is a fascinating book to read if you enjoyed Freakonomics and want to delve more into the world of randomness and the effect that it has on our daily lives.

The Geography of Bliss by Eric Weiner

While you might expect to find this book on a list about travel books, The Geography of Bliss: One Grump’s Search for the Happiest Places in the World by Eric Weiner shares many similarities with books on this list despite not focusing on economic principles.

Weiner travels to a series of different countries aiming to understand why certain countries are happier than others. His journey takes him all around the world to places like Bhutan, Switzerland, Iceland and Moldova.

Despite exploring different topics to Freakonomics, I found Weiner’s book to be written in a similar style and a good option if you enjoyed Freakonomics and are looking for an interesting travel book.

Gang Leader for a Day by Sudhir Venkatesh

Gang Leader for a Day: A Rogue Sociologist Takes to the Streets by Sudhir Venkatesh is a fascinating insight into the economics of gangs and life of drug dealers. While researching a college paper about poverty, Venkatesh meets a drug dealer called JT who gives him access to his world of crack selling and allows him to delve deeper than any outsider previously has.

Venkatesh’s book is a unique read about what day to day life is like for people a part of this world and how economic principles apply to gangs. While Freakonomics has dealt somewhat with drug dealing, Venkatesh spent around a decade a part of this world which is what makes this book unique.

Moneyball: The Art of Winning an Unfair Game by Michael Lewis tells the story of how baseball was revolutionised by the use of statistics.

When Billy Beane took over as manager of the underperforming Oakland As he was working with a smaller budget compared to many other teams in the league. Beane along with his team changed the way players were selected to the team by focusing on a range of statistics rather than traditional methods of scouting.

Beane’s method led to a long winning streak for the Oakland As and was eventually adopted by other major baseball teams.

Moneyball was later made into a hit movie where Beane was played by Brad Pitt and is a great choice for people looking for more books like Freakonomics.

Soccernomics by Simon Kuper and Stefan Szymanski is the perfect read for people that are interested in economics and have a deep love for soccer or sports in general.

It explores a range of soccer topics such as why certain countries perform well while others don’t, FIFA corruption and the psychological elements of penalty shootouts.

Soccernomics has been updated throughout the years with the most recent version published in 2018 including topics about the 2018 World Cup such as the success of Iceland.

There are a number of great books like Freakonomics that will make it easy to find another great book after you’ve finished Levitt’s and Dubner’s work. Whether it’s delving more into economic theory or reading similar style books about different topics, this list will hopefully give you some good ideas!

Are you looking for more books like Freakonomics? Have you read one recently? Let us know in the comments below! 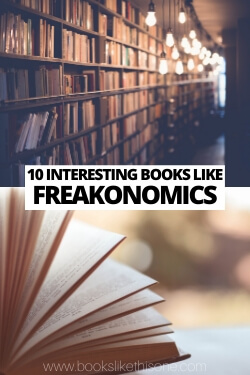