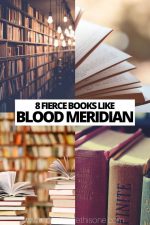 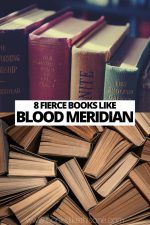 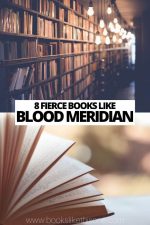 Have you read Cormac McCarthy’s 1985 novel and are now on the hunt for more books like Blood Meridian?

Well, look no further than the list of books compiled below.

Blood Meridian set a new standard for the “wild west” novel and for fans of this genre due to the way he portrays war and the senseless excuses used by political leaders to start one, with the basis of the novel on historical events making the narrative all the more harrowing.

McCarthy takes us back to the 1850s along the Mexican border. Here we meet ‘the kid,’ a young boy who gets entangled with the murderous Glanton gang, a violent group who get a sick pleasure out of hunting and killing the Native Americans.

Led by the ginormous Judge Holden who has become somewhat of a famous literary character due to his size, skills, intelligence and the way he reflects on war.

The list of books like Blood Meridian that I have put together are equally epic, though they are not the easiest at times to read, they are written by some very talented authors who should certainly be on your radar.

The Revenant, by Michael Punke

The novel The Revenant explores revenge as a theme and is also based on true events, the perfect way to kickstart our list of fierce books like Blood Meridian.

Michael Punke writes about the expert frontiersman Hugh Glass and takes readers back to 1823 and into the Rocky Mountains. Glass was a trapper and part of the Rocky Mountain Fur Company when a mission goes awry and Glass is viciously mauled by a grizzly bear the rest of his group expect him to die.

As no man should die alone, two men from the group are told to remain with Glass until his inevitable demise, but fearing further attack they rob Glass of his weaponry and leave him behind. Fuelled by a desire to seek revenge on the two men who betrayed him, Glass embarks on a gruelling three thousand mile journey across the baron frontier.

Though the harrowing bear attack scene gives the novel an allure for many, The Revenant is the ultimate story of survival with Glass defeating death with true grit, determination and an obsession for retribution.

The Devil All the Time, by Donald Ray Pollock

The inspiration for a recent Netflix movie, The Devil All the Time follows a collection of different characters across rural Ohio and West Virginia, the violence, bleak tone and Gothic Southern style of the narrative echoes McCarthy’s Meridian making it a great read for fans.

The novel centres around tormented veteran Willard Russel, his dying wife Charlotte and their son Arvin Eugene Russel who, though a good man, grows up to become incredibly violent.

Then there’s Carl and Sandy Henderson a husband and wife duo of depraved serial killers, a spider-handling phoney preacher named Roy and his crippled cousin Theodore who are trying to outrun the law.

Set just after World War II during the 1960s, the novel unravels as the lives of these characters their pasts, presents and futures all converge and interweave in the sickly poetic events that unfurl. Donald Ray Pollock’s The Devil All the Time is certainly a haunting read for anyone who enjoys books similar to Blood Meridian.

The original Man vs Beast is next on this list of novels like Blood Meridian, it is Herman Melville’s enduring Moby Dick.

With a now very famous opening line, “Call me Ishmael,” we set sail on board the Pequod with Captain Ahab and his crew as part of Ahab’s obsessive mission to enact revenge on the giant sperm whale (Moby Dick) who attacked his ship and bit off his leg on a previous expedition.

Ishmael, a sailor also onboard, chronicles their adventures at sea and describes Ahab’s descent into madness as his obsession with Moby Dick starts to get the better of him putting them all in mortal danger.

Written with an extensive and almost encyclopaedic knowledge of whaling lore and legend, Moby Dick is more than an exploration into the deep blue sea, it is also an exploration into character, the nature of perception and belief blended with Melville’s incomparable imagination.

As McCarthy rewrote the wild west genre so too did Melville rescript the adventure novel with Moby Dick.

Flannery O’Connor’s debut novel Wise Blood is next, and despite being rather disturbing in places, it is also darkly comic injecting a bit of humour into the violent nature of this list of bloodthirsty books like Blood Meridian.

The novel follows Hazel Motes, a young man questioning his faith and religion. After deciding to be an atheist, Motes sets out about establishing ‘The Church of God Without Christ’ after falling under the spell of a street preacher named Asa Hawkes and his daughter Sabbath Lily and later on in the book the eccentric Enoch Emery, who Motes claims to have “wise blood.”

Interesting escapades ensue with a fascinating collection of characters which imbue the pages of O’Connor’s now-classic novel about retribution, belief, religion, freedom, life and death.

Published in 1952, Wise Blood is a fantastic read which will leave you with plenty to think about once you have finished.

No Country for Old Men, by Cormac McCarthy

If anything, reading Blood Meridian may have given you a newfound appetite for other works by Cormac McCarthy so next on the list is one of my personal favourites by the Pulitzer Prize-winning author, No Country for Old Men.

The novel is set along the Texas/Mexico border where we meet the character Llewellyn Moss who stumbles across an abandoned pick-up truck surrounded by dead men, with a lot of heroin inside and two million dollars in cash. Moss takes the money and in doing so sets in motion a string of violent events that not even the local Sheriff can keep under control.

Moss becomes the target of Anton Chigurh, a mysterious hitman who flips a coin for human lives (played expertly by Javier Bardem in the 2007 film of the same name).

McCarthy has rewritten another genre this time in the form of the American crime novel No Country for Old Men really is a triumph, and a novel sure to satisfy fans of novels like Blood Meridian.

Are you a fan of Cormac McCarthy? Check out our list of more books like The Road!

If you like Blood Meridian for its exploration into America’s murderous history then you will also like these aspects of Norman Lock’s second novel American Meteor too.

The novel centres around protagonist Stephen Moran in this, a whirlwind coming of age adventure narrative.

As events unfurl we see Moran injured in the Civil War, befriending poet Walt Whitman, working on the railroads with Thomas Durant, playing the bugle for President Lincoln’s funeral train and becoming an apprentice photographer for William Henry Jackson among other historically notable people and events.

With an imaginative cast of characters ranging from doctors to poets to presidents, Moran even comes face-to-face with Chief Crazy Horse at the Battle of Little Big Horn and though he escapes with his life his dreams remained haunted forever turning American Meteor into an almost visionary tale.

As comic at times as it is mournful at others, Locke’s novel will take you through it at a mile a minute.

True Grit, the 1968 novel by Charles Portis, has inspired many remakes over the years with one movie earning John Wayne his Oscar.

The narrative is told retrospectively by the elderly spinster Mattie Ross who recalls her teenage years and her journey to enact revenge on the man that murdered her father, the infamous Tom Chaney.

Leaving her farm in Arkansas behind, she sets out with a boldness (uncommon in most other fourteen-year-old girls), on her revenge mission.

She soon encounters Chaney’s nemesis, the one-eyed Marshal Reuben J. “Rooster” Cogburn (Waynes character in the 1969 movie) and a Texas Ranger named LaBoeuf and together they decide to bring Chaney down once and for all.

There are shoot-outs, gangs, saloons, violence and retribution in the wild west, True Grit is a true classic American novel that is sure to thrill any fan of books similar to Blood Meridian.

Riders of the Purple Sage, by Zane Grey

If you found other Western books like Blood Meridian a bit too violent then Riders of the Purple Sage could be the next read for you as it is a bit easier to digest.

It is easy to see why it has been coined a classic within the Western genre, there’s cattle-rustling, horse-theft, kidnapping and gunfights galore!

Set in 1817, the story follows the gunslinging, black-clad avenger Lassiter on a mission to find his sister who has been kidnapped from their home town in Texas. While searching, he turns up in a little remote town in Utah, the fictional Cottonwoods, just at the right time to save Jane Withersteen a young and beautiful rancher from being forced to marry the Mormon Elder Tull.

Zane Grey has long since proven himself to be the master storyteller and Riders of the Purple Sage is the perfect combination of action and adventure, crisis and conflict, violence and sentimentality and the perfect novel to finish off our list.

It is not difficult to find books like Blood Meridian, aside from the graphic scenes of violence there is also rumination on war, human nature and belief, for example, providing a multidimensional narrative that readers of different genres will find extremely enjoyable.

Are you looking for more books like Blood Meridian? Have any recommendations that didn’t make the list? Let us know in the comments! 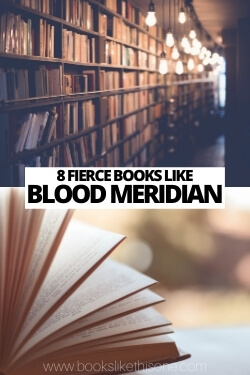