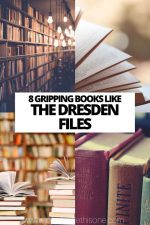 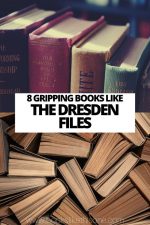 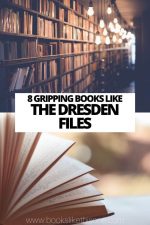 Are you searching for more books like The Dresden Files?

The everyday world is full of strange and magical things. Unfortunately, not all of them play well with humans. Enter Harry Dresden, a consulting detective… wizard. The first time I read Storm Front way back in the early noughties, I remember thinking “Finally! A wizard who’s actually believable.” Harry is a hard-boiled Chicago private eye who, like the rest of us, needs money to survive. He consults on cases involving black magic, werewolves and anything the police cannot really handle by themselves.

At this time of writing, there are 17 books in The Dresden Files series, each pitting Harry against various demons and ghouls as well as his own very human foibles’. Harry is very popular; he even got his own TV show (which you can catch on Amazon Prime).

If you’re a devout Dresdenite looking for something else to read, there are books like The Dresden Files that may help.

The Dirty Streets of Heaven, by Tad Williams

Books like The Dresden Files are often accused of being Harry-Dresden knock-offs. Not so with this gritty and fun urban fantasy from Tad Williams. Williams used to write epic fantasy before flicking to other genres (including science fiction).

The first in the Bobby Dollar series, The Dirty Streets of Heaven places us in the head of one, Bobby Dollar. Bobby is an angel. He’s not the most angelic angel, but advocates for souls trapped between heaven and hell. When recently departed souls start disappearing, both Heaven and Hell are caught off guard, leaving Bobby to investigate and maybe prevent the end of the world.

Bobby is a likeable anti-hero. He doesn’t really trust his superiors in heaven and is willing to find help wherever it’s available. A noir detective for the 21st century. Who just happens to be an angel. Count me in.

There are books like The Dresden Files that can wrong-foot you in a good way. Soulless is one of them.

Set in the 19th century in Victorian England, we follow Alexia Tarabotti, a preternatural being without a soul. Her father is dead (technically) and she’s been rudely attacked by a vampire. After accidentally killing said vampire, Alexia has to turn detective. London high society is crumbling and Alexia needs to figure out why, before it’s too late. Soulless is a mix of cosy mystery and hard-boiled detective noir. It just happens to be set in Victorian London.

Filled with colourful characters and set in a believable alternate universe, Carriger’s prose spins and twists off the page, taking you on a roller coaster ride of suspense, action, magic and death.

The Devil You Know, by Mike Carey

Better known for The Girl With All The Gifts, Mike Carey is a great writer (and having met him, a wonderfully nerdy person to hang out with). Books like The Dresden Files only work if the principle protagonist is flawed enough for readers to relate to. Felix Castor is plenty flawed.

He’s a freelance exorcist who wishes he hadn’t chosen exorcism as a career and is looking for a way out. When he takes on a seemingly simple haunting in a London museum, Felix figures it will be easy. Unfortunately for him, the living and the dead soon start trying to kill him leaving Felix with a simple choice: break the case before someone breaks his neck.

Set in an alternative version of London, the streets are teeming with ghosts and demons, which is why The Devil you Know is often described as a sort of “British Ghostbusters”. However you choose to describe it, Felix Castor’s adventures are fun, witty and perfect for any Dresdenite.

Rosemary and Rue, by Seanan McGuire

There are many books like The Dresden Files that mess around with fairies and changelings, but none so delightfully as Rosemary and Rue. October “Tony” Daye, is a changeling who’s rejected her faerie heritage.

Content to live as a human, Tony is abruptly pulled back into the fae world following the murder of Countess Evening Winterrose. A mix of urban fantasy and magical reality dances around the reader as you move through this story.

The quick wit and quirky humour of characters like Harry Dresden and Buffy are present here, but they are set within a world that gets very very dark sometimes. For me, that just made Rosemary and Rue all the more fun to read.

The reason books similar to The Dresden Files series work so well is that they mash the every day with the extraordinary. Fated is the first in the Alex Verus series and is arguably the closest you can get to Harry Dresden on the east side of the Atlantic.

Alex Verus runs a magic shop in Camden, North London. Not one of those silly party/fancy dress stores; a real magic shop. There are a lot of mages that live in the city, and Alex is one of them… albeit one with less showy powers. He’s a diviner, someone who can see the various paths a decision may lead in the future.

And when multiple factions come looking to Alex for help in cracking open a relic from an old mage war, the only paths Alex can divine all lead to his death. What’s a mage to do? This is a fun and well-told story for any urban fantasy fan.

Long before Harry Dresden began quipping his way around the streets of Chicago, Vicki Nelson was solving magical mysteries on the streets of Toronto, Canada. Blood Price is similar to The Dresden Files the difference being, it was written nearly a decade earlier than Storm Front.

Vicki (formerly of Toronto’s homicide unit), works as a private eye and upon witnessing the first of many vicious attacks, turns to a former partner, Mike Celluci, for help. There’s just one problem, the attacks seem to be a result of dark magic. Both Vicki and Mike are about to join forces with Henry FitzRoy, the illegitimate son of Henry the eighth and now a vampire.

The narrative flips between Vicki and Henry, giving the reader access to the minds of two lovingly written characters. Part of me wishes I had found this book when I was younger. It has all the great hallmarks of urban fantasy before urban fantasy became mainstream. Well worth a read.

You cannot talk about books like The Dresden Files without mentioning the Peter Grant series. The young and ambitious Metropolitan Police constable is forced to confront the magical realm that exists alongside day-to-day life whilst out on patrol. His prospects begin to look up when the only witness of a puzzling murder turns out to be a ghost.

I first read Rivers of London (published as Midnight Riot in the USA) back in 2011 when it came out. Already a fan of Aaronovitch’s work on classic 1980s Doctor Who (Remembrance of the Daleks is still one of my all-time favourite serials) I thoroughly enjoyed Rivers of London and Moon Over Soho in particular. Reading about Peter’s journey from naïve young police officer to an official Metropolitan police wizard is great, and the villain in the first book is truly terrifying.

Trust me when I say, you’ll never want to watch another Punch and Judy show ever again. Peter isn’t Harry Dresden. He’s his own brand of detective having to manage magic, procedure, and institutional racism in a way Harry never has to think about. Whilst Harry’s busy grumbling and fighting off hordes of werewolves and demons, you’ll find Peter lurking in the background, doing his best to learn a new spell and manage the fallout.

Skinwalker is another book like The Dresden Files eschews the standard ‘hard-boiled white male detective’ trope, instead gifting the reader with Jane Yellowrock. Jane is the last of her kind, a skinwalker of Cherokee descent.

She can turn into any creature she desires and hunts vampires for a living (think Sam and Dean from Supernatural but without the bro-mentality). Jane’s existence is turned upside down when she’s hired by one of the oldest vampires in New Orleans to hunt down a rogue vampire. Throw in bordellos of literal ‘ladies of the night’, a handsome Cajun biker with a panther tattoo and lots of nasties trying to kill Jane, and you have a novel that is both fun and gritty.

Jane is a likeable protagonist: flawed, cunning and kick-arse. What’s most believable about Jane though is the effort it takes her to transform into another creature. It’s nice to read an urban fantasy where the magical elements aren’t just snap-your-fingers simple.

Are you searching for more books like The Dresden Files? Have any recommendations that didn’t make the list? Let us know in the comments! 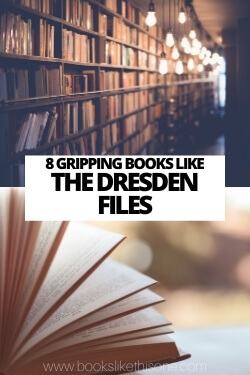