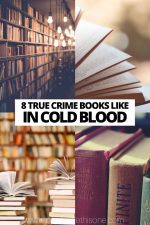 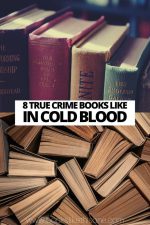 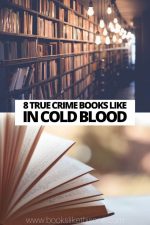 Books like In Cold Blood lure me in, like many other readers, with the grotesque fascination of getting inside the minds of murderers and criminals and finding out the unbelievably shocking details of high profile cases. It is a grotesque fascination that doesn’t seem to waiver despite how unsettled, scared or shocked I get reading true crime novels.

Truman Capote’s renowned novel surrounding the infamous Clutter family murder is one of my personal favourites I think because of Capote’s ability to interweave his incredible journalistic capabilities into a deeply affecting narrative.

The novel is comprised of a three-way narrative which pieces together events leading up to the seemingly motiveless quadruple murder, the lives of the victims and murderers and how this horrific cold-blooded attack shook the small town of Holcomb in Kansas.

A lot of the books on this list owe a debt to Capote as In Cold Blood is often said to be the original true crime novel, meaning that luckily for us true crime fans there are plenty of books like it to fuel our morbid fascination.

Not many murderers are as notorious as Charles Manson, who instigated a series of brutal murders including that of the actress Sharon Tate. Helter Skelter is a book by Vincent Bugliosi, the prosecutor in the 1970 trial which brought Manson and his cult of accomplices to justice, and chronicles the events leading up to the murders and the process and outcome of the trial.

Manson — and the murders he goaded to ignite a race war amongst Americans in response to the Civil Rights Movement — has been the inspiration and influence behind many songs, other novels such as The Girls by Emma Cline and films like Quentin Tarantino’s recent Once Upon a Time in Hollywood (which, let’s face it, was a much nicer outcome of events).

Thanks to the notoriety of the case and Bugliosi’s award-winning narrative, Helter Skelter is the perfect next book for readers of true crime novels like In Cold Blood.

I’ll Be Gone in the Dark, by Michelle McNamara

As with a lot of novelists of books like In Cold Blood, they can become embroiled in the cases and the people that they write about sometimes to detrimental effect, Capote for example spent 6 years writing In Cold Blood and was unable to finish another novel since its publication having become quite taken with Perry Smith and embedded in his trial.

In the case of our next book, I’ll Be Gone in the Dark, Michelle McNamara became obsessed with trying to find the violent psychopath known as the Golden State Killer who terrorised California for over a decade. McNamara, a true-crime journalist and creator of the popular website TrueCrimeDiary.com, was determined to track down the criminal mastermind who’d eluded multiple police forces and detectives while committing fifty sexual assaults and ten sadistic murders.

Unfortunately, McNamara died before finishing her book and seeing the Golden State Killer brought to justice, her chilling account I‘ll Be Gone in the Dark is McNamara’s legacy and is certainly worth a read.

The Stranger Beside Me, by Ann Rule

Another notorious killer is next on this list of true crime novels like In Cold Blood, it’s Ann Rule’s The Stranger Beside Me, which documents a first-hand experience working alongside the infamous Ted Bundy.

Defying common belief that we would surely know that our neighbour, colleague or partner was a monstrous lady killer, Rule describes her gradual realisation that her sensitive, charming, colleague at the crisis hotline was in fact just that, confessing to at least thirty-six counts of murder.

Rule expertly draws from her own personal experience working alongside Bundy weaving this into the narrative along with her skill as a crime reporter and her continued correspondence with Bundy until his eventual execution.

The Stranger Beside Me is a remarkable feat, originally published in 1980, Rule is another writer said to have changed the course of the true crime narrative as her chronicle is utterly unique with so many intimate details while being equally terrifying for the same reason – a shocking read for any true crime readers out there.

The Devil in the White City, by Erik Larson

Erik Larson offers readers some light relief in his non-fiction novel The Devil in the White City by alternating between his portrayal of the sinister H.H Holmes, a serial killer masquerading as a doctor, with a profile on Daniel H. Burman, the architect behind the construction of the Chicago World’s Fair.

Burman’s project to construct the fair was turbulent all the way to its fruition, he had to overcome the death of his partner, huge financial hurdles and an extremely tight deadline among many other unforeseen problems but his dedication to complete his vision combined with the fair’s success are inspirational.

However, this story of success is juxtaposed with the altogether horrifying activities of Dr H.H Holmes who used the fair to lure his victims across the street to his World’s Fair Hotel which came equipped with its very own crematorium and gas chamber – perfect for disposing of evidence! Shockingly unbelievable at times, fans of books similar to In Cold Blood will enjoy reading The Devil in the White City too.

For The Thrill Of It, by Simon Baatz

Fans of In Cold Blood will be familiar with the next two murderers on this list as they were on death row at the same time as Perry and Dick before they were all consequently put to their deaths for the heinous crimes they committed. Simon Baatz documents the murderous escapades of the equally monstrous Nathan Leopold and Richard Loeb in his novel For The Thrill of It.

Both Leopold and Loeb were sons of rich Jewish families and, being tremendously privileged, thought they were above the law. What started out as petty criminal acts such as vandalism and thievery soon turned nasty when they decided to up the ante on their crimes and murdered a 14-year-old boy called Bobby Franks in a shockingly dark seemingly motiveless act.

Baatz’s chronicle of the murderous pair explores the question why they would do something like this, two young men who potentially have the world at the feet concluding, as the title implies, simply For The Thrill of It.

Uncovering another terrifying facet to the human psyche, readers of books similar to In Cold Blood are sure to be positively horrified by For The Thrill of It.

The Five: The Untold Lives of the Woman Killed by Jack the Ripper, by Hallie Rubenhold

Everyone knows about Jack the Ripper, the villainous lady killer of the Victorian era, being taught widely in history classes in England, having a section dedicated to him in the London Dungeons as well as walking tours throughout the city. As historian Hallie Rubenhold realised, little is known about his five victims, the lives they led before, the kind of women they were all of this is lost in the cloud of Jack the Rippers notoriety.

In Rubenhold’s novel The Five: The Untold Lives of the Woman Killed by Jack the Ripper, she sets the record straight, these women were not prostitutes as the media would have us believe they ran coffee houses, they wrote ballads, they worked in printing presses. They were Polly, Annie, Elizabeth, Catherine and Mary-Jane and they were so much more than their end.

A moving portrait which absolutely blew me away, The Five is a devastating but necessary account which anyone looking for more true crime novels like In Cold Blood will enjoy.

Killing for Company: The Case of Dennis Nilsen, by Brian Masters

A particularly twisted one next which unnerves even the most hardened true crime reader among us as the author Brian Masters became particularly close with the subject of his book Killing for Company: The Case of Dennis Nilsen.

The notorious Dennis Nilsen has been catapulted into the forefront of everyone’s minds following a recent ITV series about this book by Masters and Nilsen’s string of particularly gruesome murders, which stars David Tennant as Nilsen.

Nilsen was arrested on February 9th 1983 following the cause of a blocked drain was found to be human remains, Nilsen then confessed to a total of fifteen gruesome murders which he conducted over the course of four years. His victims were all young homosexual men who, sadly, were never reported missing.

Though creepy, with Masters writing the book with complete cooperation from Nilsen even receiving his notes/comments on certain aspects of his own story, Killing for Company does provide readers with unfettered access into the study of a mass murderer’s mind which any fan of books like In Cold Blood will find riveting.

The Executioner’s Song by Norman Mailer

Normal Mailer won a Pulitzer Prize for The Executioner’s Song, his chronicle of Gary Gilmore and his fight to receive execution for committing the senseless murders of two people following a lifetime of petty crime and imprisonment.

Composed almost entirely of interviews with the families and friends of Gilmore and his victims’ too, Mailer is able to compose a profile of the troubled youth-turned-murderer focusing on events leading up to the murders, Gilmore’s eventual capture, trial and execution by firing squad.

His refusal of the appeals process made Gilmore a celebrity, with his trial and this novel forming the basis of a 1982 movie starring Tommy Lee Jones as Gilmore. What is perhaps most haunting was Gilmore’s insistence on the death penalty rather than life imprisonment which I think is also what caught Mailer’s attention too, adding depth to this apparent cold-hearted yet tortured soul. The Executioner’s Song is a fitting novel to end this list of true crime books like In Cold Blood.

Though I enjoy books like In Cold Blood, true crime is a genre I can’t read consistently, I always say after I finish a novel “this will be my last” but after some time passes the sickly fascination returns (probably spurred on by a recent Netflix documentary) and off I pop down the true crime aisle again.

It is the authors’ talent that I find most compelling, their ability to weave such absorbing narratives around such heinous crimes is truly remarkable and worthy of the awards the authors featured here have won.

Are you searching for more books like In Cold Blood? Have any recommendations that didn’t make the list? Let us know in the comments! 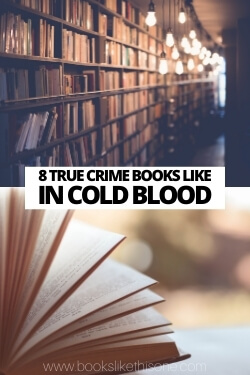