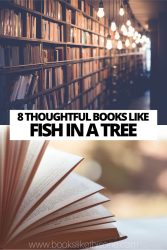 Are you on the hunt for more books like Fish in a Tree?

This 2015 middle-grade novel consistently gets attention from readers. It isn’t the first novel to tackle dyslexia in children head on, but it is one that helped focus more attention on diagnostic failures that remain in many first-world healthcare and education settings today.

Readers and parents in the US and UK might read Fish in a Tree, and nod along with Ally’s journey. Children are clever and children with dyslexia are often extremely bright. Yet, without the right guidance and support children can fool you into thinking they’re fine when in reality, they’re struggling.

Fish in a Tree is aimed at ten- or eleven-year-olds, but books like this should be read by every parent, educator, politician and healthcare professional.

Books like Fish in a Tree often focus on the disability, but some remind us of the effect disability has on the people closest to us. Autism is a developmental disability that can put families under severe pressure if not diagnosed and appropriate support measures put in place.

In Rules, twelve-year-old Catherine feels this pressure every day. Having a brother like David means that her whole family revolves around David’s needs and behaviours. David lives with autism and Catherine is simply known as ‘David’s sister’.

Although Catherine loves David and has helped him by putting in ‘rules’ that help him express himself, she still wants to be known as her own person. There are moments in the story that might make you cry, especially if you are a parent or sibling living with someone like David.

But perhaps this book’s most powerful achievement lies within the empathy it shows for any family living with autism.

Because of Mr. Terupt, by Rob Buyea

There are many books similar to Fish in a Tree that deal with the complexities of growing up and learning about consequences. Because of Mr. Terupt hones in needle-like on how children begin to understand how their actions affect others.

On the face of it, Jessica, Alexia, Peter, Luke, Danielle, Anna, and Jeffrey are your standard bunch of western eleven-year-olds. Curious, cruel, mixed up, afraid, and clever. It is the way they interact with their teacher, Mr. Terupt, that jogs this story along.

He seems to know exactly how to handle all their disparate personalities and engage with them. But every action has a reaction, and when an accident occurs, the kids draw on what they’ve learned to grow.

This is a solid middle-grade read for any child.

On the face of it, Welcome Back, Maple Mehta-Cohen is the exact same story as Fish in a Tree, but hold on – there is more to this book than meets the eye.

Maple is being made to repeat the 5th grade because her teacher has discovered she can’t read. Ashamed and worried, Maple fabricates a story to her old classmates that she is being kept back as a ‘teacher’s assistant’ due to budget cuts.

However, Maple is a different personality to Ally in Fish in a Tree.

Maple rarely causes trouble, loves being read to, and dictates stories in the guise of her amazing alter-ego Mira Epstein-Patel. Maple displays dyslexic traits that haven’t been detected by her teachers and family because of how cleverly she has been hiding them.

Being mixed-race Jewish-Indian also brings cultural clashes and expectations that understandably force Maple to hide the truth (her parents are genuinely shocked when they discover Maple can’t read because they’ve always seen her with books).

The stigma around dyslexia is on full display here, along with the sad reality that many schools and healthcare systems are still ill-equipped to detect and diagnose at an early stage.

Crenshaw is another similar title to Fish in a Tree. Thematically, both books deal with children struggling to understand a world that appears increasingly hostile and inaccessible.

Crenshaw shows us that children listen and absorb everything around them. Jackson knows his family are in trouble, because he’s heard his parents talking about money, food and not being able to afford the rent. He wants to help, despite being only eleven years-old.

Enter, Crenshaw, a giant cat that Jackson hasn’t seen since he was seven. Together, the two work to find a solution to the family problems.

Dealing with issues including poverty and how disability is still stigmatized in the workplace, Crenshaw is worth a read for children and adults alike.

How to Find What You’re Not Looking For, by Veera Hiranandani

Dysgraphia is not as well-known as dyslexia, but in How to Find What You’re Not Looking For dysgraphia is neatly included within the larger story. A brain-based learning disability, dysgraphia impairs handwriting ability.

Dysgraphia does not define twelve-year-old Ariel Goldberg, but it is well written into her story as she struggles to cope with her family’s problems. It is 1967 and the family bakery is in trouble. To make matters worse, Ariel’s older sister has just run off with new boyfriend, Raj, a young man from India.

This follows the historic Supreme Court decision overruling the banning of interracial marriage in the US. Uncomprehending of her parent’s conservative attitudes towards non-Jews, Ariel turns to poetry as a form of release and revelation.

The characters in How to Find What You’re Not Looking For are raw and real and Ariel is highly believable as she struggles with her disability and the varying attitudes she encounters towards race and culture. You almost forget this is a children’s book.

The Thing About Jellyfish, by Ali Benjamin

Suzy Swanson (all authors love alliteration) is in mourning and refusing to speak. Her best friend, Franny, has just drowned in an accident, but Suzy is convinced a jellyfish was the actual cause of death.

Determined to uncover the truth behind her friend’s death, Suzy sets out to prove her theory. But things are more complex than Suzy is willing to admit to herself.

After they fell out the year before, Suzy and Franny weren’t on speaking terms and as Suzy moves her way through grief, she is forced to confront her own feelings of guilt and loss.

Books like Fish in a Tree tug at every heartstring they can to pull you in, and The Thing About Jellyfish is no exception. Charming, sad and hopeful, there is much to enjoy here.

The Unteachables, by Gordon Korman

Redemption and dark humour flow through the bloodstream of this novel. There are books like Fish in a Tree that can forget that growing up is funny. Yes, it is full of pain and learning, but the humour is often sidelined.

Zachary Kermit is one year away from retirement as a middle-grade teacher. Following a scandal that shattered his reputation years before, he has been phoning his lessons in ever since.

Unfortunately, the Superintendent intends to derail Zachary’s retirement plans by giving him an 8th grade (Year 9 in the UK) bunch of kids to teach. Even worse, they are known around school as ‘The Unteachables’, an unruly, trouble-making group of dumb delinquents.

Except they’re not. And when Zachary realises that Aldo, Parker, Kiana, and Elaine are as smart and vulnerable as any kid, the old teaching spark is shaken awake.

Described by some reviewers as a funnier and ruder version of films like Dead Poets Society or The Breakfast Club, The Unteachables makes you forget you’re reading a middle-grade novel.

Close to Famous, by Joan Bauer

Twelve-year-old Foster dreams of hosting her own cooking show. She practices whenever she can, baking and cooking all sorts of treats. Her speciality, though, is cupcakes (who doesn’t like cupcakes?!).

After she and her mom run away to the small town of Culpepper (and from a bloke who thinks he’s Elvis no less), Foster wonders how she’ll ever achieve her dream. Plus, how is she going to overcome her difficulty with reading as well as come to terms with the loss of her dad in the Iraq war?

Books similar to Fish in a Tree mix tragedy, hope, humour, and more into a mixing bowl, hoping the ingredients they’ve chosen will work. Close to Famous is a recipe that works. Highlighting the struggles dyslexia can bring whilst making you smile and laugh is no easy feat, but Bauer handles it well.

Fish in a Tree was published at about the right time. It hit a nerve that needed to be highlighted and has delighted readers of all ages since 2015. The books we’ve recommended are just some of the many titles you can find that deal with similar social, educational and healthcare issues.

Are you looking for more books like Fish in a Tree? Have any recommendations that didn’t make the list? Let us know in the comments! 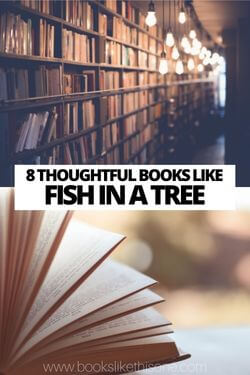